Jessiebelle (in Japanese: ルミカ, Rumika) is the main antagonist in the Pokémon episodes "Holy Matrimony!" and "The Treasure is All Mine!". She was in an arranged marriage with James which was arranged from a young age causing the latter to flee from his home upon realizing how controlling and psychotic she was. In both of her appearances, she is seen attempting to force him into their marriage and morph him into a "proper gentleman".

Jessiebelle and James surprisingly spent a lot of time together as children, and their parents decided to arrange a marriage between them because of it. After this had happened, James found out that Jessiebelle was truly snobby, controlling and abusive and fled home to avoid being married to her, leaving behind his beloved Growlithe known as Growlie.

She appeared in this episode after James' parents faked their deaths in order to trick him into returning home. Upon hearing of the fortune he would inherit Jessie and Meowth come with a plan and dress in awful "invisible suits" in order to steal the fortune however upon entering they realise James' parents where still alive which James angrily tells them he knew since they always do schemes like that to force him to return. His parents play along with the act for a while until they reveal Jessiebelle much to James horror. Meowth comments on the resemblance between her and Jessie which Jessie angrily scolds him for.

Later they remove Jessie and Meowth from the premises as well as Ash, Brock and Misty who were watching from a higher level. In the dungeon and begins to whip James who in return runs and dodges the whip. This causes Jessiebelle to release her Vileplume which paralyzes James stopping him from fleeing and escaping. Before preparing for their wedding James is rescued from an unlikely source his old Growlithe named Growlie who saves him. Jessiebelle puts up one final fight with her Vileplume however Growlie and Pikachu burn her Vileplume alive causing it to chase Jessibelle until she accidentally knocks James' parents into a pond and is last seen in this episode running back to the mansion with Vileplume following her, giving James time to flee.

After her previous defeat, Jessiebelle visits one of James' family summer homes after being alerted by the butler Sebastian about James being there. After her confrontation with him involving her Vileplume (now healthy again) attacking him, Ash, Brock, Jessie and Meowth James tells Ash to make Pikachu blast him off which he does however he doesn't realise that Jessiebelle actually went with him and Meowth instead of Jessie. Her final appearance is her chasing James and Meowth down the beach.

Despite appearing as sophisticated and polite, Jessiebelle is also a vicious, cruel, obsessed, mentally unstable and psychotic. She will stop at nothing to marry James to the point of complete and utter obsession, as seen in all of her appearances. She shares traits with both Jessie and James with her being calm, calculating and flamboyant as well as short fused and controlling as well as quite abusive and psychotic.

However, she has few good traits, as she truly loves her Vileplume and deeply cares about it.

Jessiebelle bears a striking resemblance to Jessie, with the only differences being her hair, which is slightly crimson and held up in pigtails and her dress sense which usually consists of fancy and expensive looking dresses. She is also seen holding a fan quite a lot. 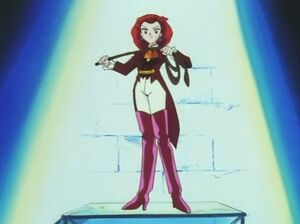 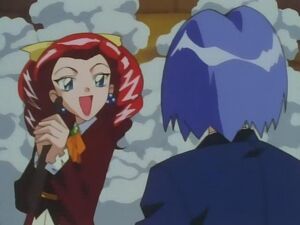 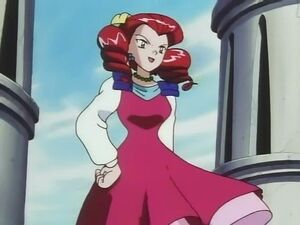 Jessiebelle watching James fleeing from her. 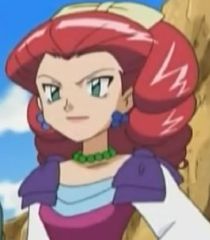 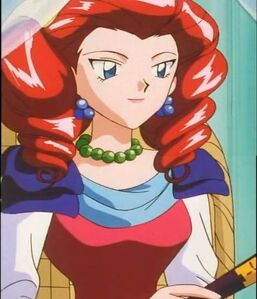 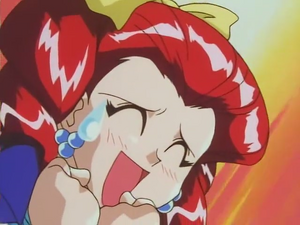 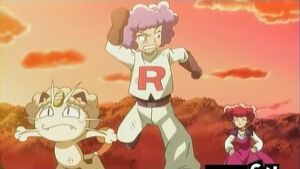 Retrieved from "https://villains.fandom.com/wiki/Jessiebelle?oldid=3704297"
Community content is available under CC-BY-SA unless otherwise noted.