Jester (implied in the past)

Surpass his sister (both failed).
Dominate everything and all times to have everything that he wants and does whatever he wants (succeeded but only in future).

The Jester is the main antagonist of the 2014 Indian-American computer animated fantasy film Legends Of Oz: Dorothy's Return. He is the manipulative brother of The Wicked Witch of the West and Wicked Witch of the East. who stole his sister's broomstick from Emerald City.

He was voiced by Martin Short, who also played The Appraiser in the same film, Huy in The Prince of Egypt, Ooblar in Jimmy Neutron: Boy Genius, Preminger in Barbie as The Princess and the Pauper, Jack Frost in Santa Clause 3: The Escape Clause and Mr. Wiloughby in The Wiloughbys.

The Jester is shown to be a pompous, conniving, psychopathic, ruthless, baleful, deceiving, manipulative, and villainous trickster who unlike ven though his sister, he is more concerned with continuing with her plan to take over Oz, but in his own way, showing that he doesn't give a hoot about his sister. Though considering how much turmoil she put him through when she was alive, this isn't really surprising. One of the bad deeds his sister did was curse him to never rid himself of his outfit as when he does try to take it off, another jester outfit (albeit with a different color) appears beneath it, as shown when he kidnaps Glinda.

Typical for a jester, he tells a bunch of jokes (though no one seems to find them funny). He's also a huge manchild, getting upset when his attempts to deal with Dorothy fail, blaming his head Flying Monkey minion for failing him when in truth, he has no one to blame but himself for his misfortunes, and craving for power near the end of the film in a pathetic manner. He also lacks gratitude as he never seems to appreciate his minion's efforts to stop the good guys, instead insulting them, and when Dorothy and the gang saves him from the twister, he immediately tries to barter for the broom.

When the Jester was just a young boy, he often tried to steal his sister's broom for himself. Not only that, but she also did terrible, repugnant, and abominable stuff to him. At some point, she placed a spell on him that prevents him from taking off the same outfit. Whenever he attempted to take it off, another one with different colors would appear each time. Even after her death, the spell remained intact.

Role in the Movie

After stealing the Wicked Witch of the West's broomstick from Emerald City, the Jester was seen at his castle talking to Glinda the Good Witch. He explained that he was cursed by his sister into being unable to take off his uniform. Attaching a magic orb to the broomstick so he could use its magic, the Jester turned Glinda into a puppet and locked her up in a glass case. The Jester had winged-monkeys invading Emerald City and kidnapped Lion, Tin Man, and Scarecrow and placed them in their separate torture chambers.

He changed the wooden signs, so that Dorothy and Wiser would get arrested for eating the illegal sweets. He also caused a destructive earthquake, which damaged Dainty China Country. Later, he led the gang into a huge waterfall with fake fireflies, which resulted in China Princess being broken. The Jester often abused his right-hand Flying Monkey henchling by shrinking their wings. He even thanked Dorothy for unintentionally killing the Wicked Witch of the West out of pride.

During the final battle, the Jester created a purple tornado, which would destroy anything sucked into it, intending to kill Dorothy. Dorothy was able to take his broom and break his spell, after which she saved him from being sucked in, and he respectively offered her to rule Oz with him. Dorothy refused and smashed his orb before throwing the broomstick into the tornado. At this, the Jester lost his sanity by jumping in the tornado to get the broomstick back, and both he and the tornado vanished for good.

It is unknown if The Jester ever survived the tornado or not. 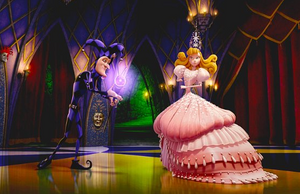 The Jester and Glinda. 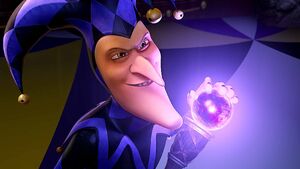 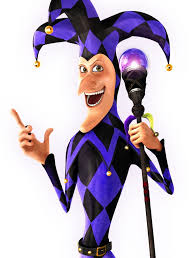 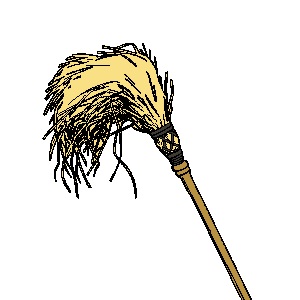 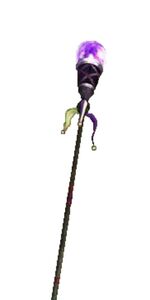 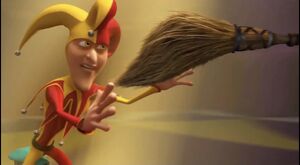 A younger Jester trying to steal his sister's broom. 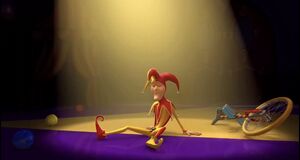 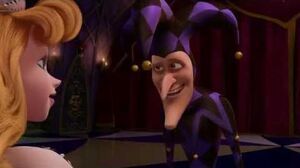 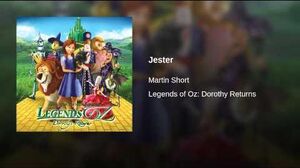