Member of the Legion of Dooooom (formerly)

Join the Legion of Dooooom (briefly).

Jesus Christ is a recurring antagonist from the Netflix original series, Paradise P.D. He is the holy prophet of Christianity and the son of God. Every now and then, Jesus likes to torture his angels in heaven just for fun. In "The Father, The Son, and The Holy Post-It Note", Jesus temporarily worked for the Legion of Dooooom.

In "Police Academy", Hopson died and went to Heaven. Jesus Christ was manning the gates and welcomed Hopson to the kingdom. However, when he tried to enter, Jesus told him that he could not enter the kingdom because he didn't complete his bucket list and shoved him back down to Earth, bringing him back to life. Hopson was trapped in a coffin when he came back and it was impossible for him to escape and complete his bucket list. Hopson eventually died of lack of oxygen and went back to Heaven, only for Jesus to shove him back down to Earth again, despite him knowing he wouldn't be able to complete his bucket list. This cycle kept repeating and went on for a while before God came in and scolded him for bullying people with fake bucket lists again. Jesus simply laughed at this, feeling pride for the fact that he was such a dick.

In "The Father, The Son, and The Holy Post-It Note", Jesus Christ became temporarily associated with the Legion of Dooooom, helping Pat Robertson with stealing money from the Catholic church. When they went to the church, the Catholic priest refused to give back the money and started insulting Jesus. Jesus retaliated and fought back only to get beaten to a bloody pulp by an army of nuns, who threw him and his co-workers out the window. Jesus pretended he did really good in the battle but people such as Gerald Fitzgerald and Frank Flipperfist pointed out that he was completely worthless in battle, as he did nothing but flail around and get himself defeated. Luckily for the lot of them, during Jesus' losing battle, Jerry Flipperfist stole the money, while nobody was looking by swallowing it. He barfed it up after they escaped the church and Fitz thanked him for being so useful. Jesus, on the other hand, was fired from the team for being so useless.

In "Trigger Warnings", Jesus Christ made a cameo at the end of the episode, sitting in Heaven and scrolling through Twitter. He saw a tweet Randall Crawford made on a recent shooting, saying "Thoughts and Prayers". Jesus refused to answer these prayers and do anything to prevent a future shooting because the Tweet didn't get enough likes.

Jesus Christ is a white-passing Middle Eastern man with a handsome chiseled face and a six pack of washboard abs with some neatly combed chest hairs on it. He has long, flowing brunette hair and a neatly shaven beard of stubble. He wears an ivory cloak with a red sash and brown sandals.

Jesus Christ is a sadistic fiend, who uses his high position of power to torment and abuse all those who are beneath him just for personal entertainment. Because of his invincibility and omniscience, nobody can punish Jesus for what he does, except for God, who does not approve of his son's rudeness. Despite his invincibility and omniscience, however, Jesus Christ is horrible in battle, as seen in "The Father, The Son, and The Holy Post-It Note", when he got attacked by the Catholic priest and all he did was cry and soil himself. Jesus still remained arrogant and bragged about how cool he looked in battle, denying his humiliating loss.

Jesus' moral compass is very broken and he has some very backwards views on ethics. He makes a point of preventing tragedies on Earth only if people's "thoughts and prayers" Tweets get enough likes. If not, he withholds his powers to save millions of people's lives and allows people to die in his watch, even though he could use his unlimited powers to effortlessly save them. Why he chooses to torment people like this is unknown but is most likely for personal amusement.

Despite Jesus' overall nature, Jesus still has standards, as demonstrated by his interactions with Pat Robertson. Jesus didn't like how Pat used his name to spread bigotry and homophobia and told him that he'd only help him get his stolen money back if he stopped acting in such a manner. 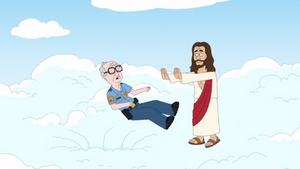 Jesus wrongfully and willfully pushing Stanley Hopson out of Heaven. 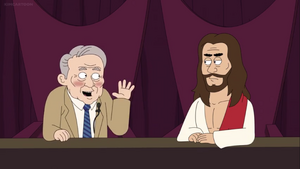 Pat Robertson being in love with Jesus. 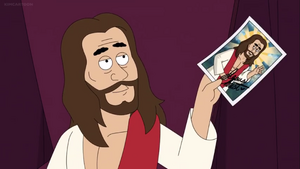 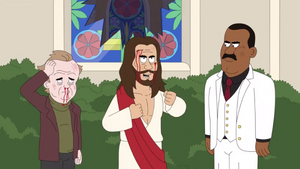 Jesus after getting being attacked by the Catholic Priest.