The Jesus Hates Homos Church, also known simply as the JHHC, is a recurring villainous organization in Brickleberry. It is a fundamentalist, bigoted church led by Reverend Rosty that propogates hatred against the LGBT community, the Jewish community, and people seeking abortions. They are known for their homophobic protests and attempts at "reprogramming" the LGBT community with a shock therapy machine they call "The Homo-Eradicator".

In "Gay Bomb", Woody Johnson announced that the Jesus Hates Homos Church would be coming down to Brickleberry National Park to stage a protest. Connie Cunaman was opposed to this because she was a lesbian, but Woody called her out for being intolerant against their religion, and Connie told everybody the story of how when she was a little girl, her parents sent her to the Jesus Hates Homos Church to "reprogram" her. A flashback showed her being "reprogrammed" by an electric curing machine called "The Homo-Eradicator". However, Connie's libido was so strong that the machine failed to "reprogram" her, so her parents disowned her and replaced her with a dog of the same name. She was also banned from the Jesus Hates Homos Church forever. In the present day, Connie begged Woody to not send such a hateful church to the park, but Woody refused, since they were willing to pay well to stage their protest there.

When the Jesus Hates Homos Church arrived, Reverend Rosty payed Woody and Woody welcomed them to the park, although he was embarassed to see that a rainbow was there. Rosty set up his podium and made his speech to the protestors of the Jesus Hates Homo Church, going on a general tirade against homosexuality and Judaism, the latter of which, in Rosty's eyes, is a worse crime to commit than murder or rape. One of the protestors pointed out that technically Jesus himself was Jewish, resulting in Rosty having him stoned to death for contradicting him with facts.

Connie broke into a military base and blew up a gay bomb, which reversed the sexual orientations of everybody in the park, including the Jesus Hates Homos Church, which turned them all gay. When Connie went back down to the park, she saw that everybody from the Jesus Hates Homos Church had immediately changed their ways and renamed themselves the Jesus Loves Homos Church, gathering together in celebration of tolerance. A newly gay church member came up and told everybody that Kathy Griffin was doing a show in Tuscon and they all boarded a gay bus called the Winky Wagon to go there.

After the bombing, two JHHC protestors arrived late and looked for the protest, with the protestors just so happened to be none other than Connie's parents, Alan Cunaman and Mrs. Cunaman, who were delighted to hear that Connie was now straight, having been turned by the gay bomb. They accepted her back into the family again, and because it would be awkward to have two Connies, Alan strangled the dog. As great as things were for the Cunaman family again, Alan and his wife were displeased to hear that Ethel Anderson was after her, since she had been turned into a lesbian. Mr. & Mrs. Cunaman kidnapped Ethel and took her to a cabin, where they brought out the Homo-Eradicator. One of the members, Chuck, said that he didn't like the name of the machine and suggested they rename it "The Queer-O Dissapear-O", resulting in Alan stranging Chuck to death.

Connie tried to break into the cabin to save Ethel, but due to her now being straight, she lacked the strength required to take down the guards. Instead, she teamed up with Malloy to go back to the military base and get the antidote. Kirk Sanders told Connie that they only had one dose of the antidote and so she and Malloy got into a fight over it, with Malloy wanting to use it on Woody, being sick of his gay antics. During their fight, they destroyed the antidote and ruined it for both of them, as Kirk admitted that he was only joking about the antidote and that the effects of the gay bomb wear off after 24 hours and since it had been a day since Connie detonated it, that was right now. The effects wore off and everybody went back to their normal sexual orientations again, including the members of the Jesus Hates Homos Church, implying that they went back to their homophobic ways.

Connie broke into the cabin and saved Ethel, who had now been technically reprogrammed due to her going straight again. Connie's parents thought that they saved her so they congratulated themselves for their hard work, as they told Connie that they accepted her now and they were excited to see her again for Christmas. Connie told them that she was a lesbian again, so her parents completely disappreared and shut her out of their lives once again.

The Jesus Hates Homos Church appeared once more "Baby Daddy", staging a pro-life protest outside of the Brickleberry Medical Center, propogating against abortions. They were faced with a counter-protest of liberal feminists and their pro-choice protest, but hust then, Steve Williams came in and showed everybody that he was pregnant. Rosty was terrified by a man being pregnant and called it an abomination against God, but the leader of the pro-choice movement labeled this a "miracle of science" and said Steve should let it live. The two of them realized how they did a complete turn on their beliefs and decided to switch sides, with the pro-choice protestors now wanting Steve to keep it and the JHHC saying he should abort it.

The situation with Steve being pregnant soon got complicated enough that neither side knew where to stand on the argument. Bobby Possumcods suggested they just kill the baby altogether and then go to Hooters, and everyone on both sides was on board with this. However, it was too late to do this, as Steve "gave birth" to an ovarian cist. After this, both sides just gave up and went to Hooters. 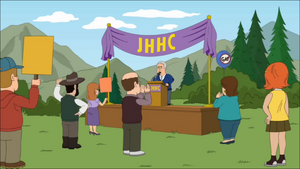 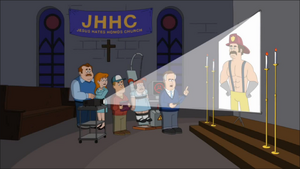 Connie being reprogrammed at the Jesus Hates Homos Church. 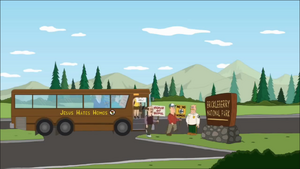 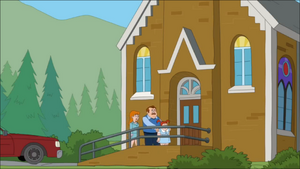 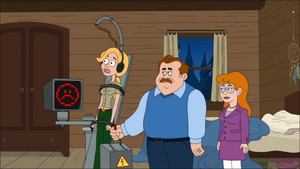 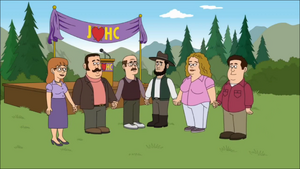 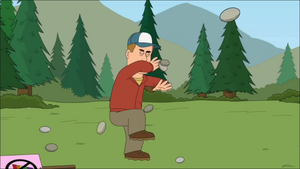 The Jesus Hates Homos Church stones one of their own members to death. 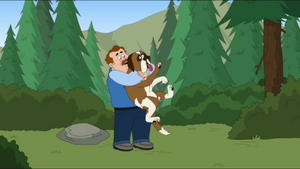 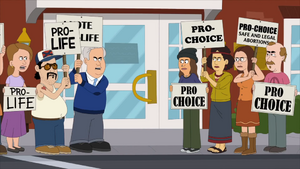 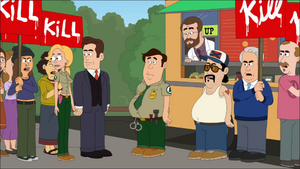