Employee of the Month

Get away with raping Dr. Melfi (succeeded).

Jesus Rossi is a minor antagonist in The Sopranos, being the main antagonist in the season three episode "Employee of the Month".

He was portrayed by Mario Polit.

After Dr. Jennifer Melfi finishes her work for the day talking with her clients and goes into a parking lot to her car, where she's suddenly attacked by an unknown man. Dr. Melfi manages to fight back for a bit against the assailant until he knocks her down onto a staircase while she's running away, spraining her knee in the process, and then proceeds to violently rape her before running away.

Later on while at the hospital, Dr. Melfi's ex-husband Richard and her son Jason visit her, outraged that this happened. While testing some dirt under her fingernails for possible evidence of the rapist's blood, investigators inform her his name is Jesus Rossi and he was caught soon afterwards at a Popeye's Chicken restaurant. Unfortunately, due to an error in chain of command, the police are forced to released him.

Sometime later Dr. Melfi goes to eat at a Wrap Nation restaurant and notices an Employee of the Month award with her rapist's face on it, then Melfi sees him at the cashier machine and Rossi doesn't recognize her, making her quickly leave. Later that night, she has a dream where she tries buying something from a soda machine but her hand gets stuck and when she looks behind herself, she notices Jesus standing behind her. Suddenly, he's attacked by a crazed Rottweiler who proceeds to maul him to death. When Dr. Melfi wakes up from her nightmare, she realizes the importance of it: her patient, Tony Soprano, was meant to be the Rottweiler who could effortlessly kill her rapist and she desperately seeks revenge now.

The next day, she has another meeting with Tony, planning on asking him to use his mob connections to find and kill Jesus Rossi. When he asks her about her knee, she lies and says she hurt her knee in a car accident. When she suddenly starts crying, Tony goes over to her to comfort her and after she composes herself, Tony asks her if there's anything she wants to say to him. Dr. Melfi takes a moment to pause and simply tells him "No", not wanting to stoop to Jesus' level as well as not wanting to be indebted to Tony and the mafia for life. 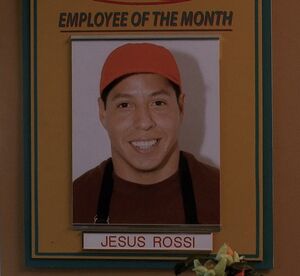 Jesus being mauled by a rottweiler in Dr. Melfi's dream.