The Only One Free (in his eyes)
The Court Jester
Joker (game files)
THAT DAMNED [[Clown Around Town!]] (possibly)

Causing chaos whenever he wants.

Let others be "free".

Play a "simple numbers" game with his guests (both succeeded).

Jevil is a minor character in the 2018 indie game Deltarune, serving as a bonus boss in Chapter 1 and a mentioned character in Chapter 2. He was the former court jester of the Darkners until he met a "strange someone" and started descending into insanity; first, he started saying things that didn't completely make sense, then he saw the entire world as a game so he was locked away by Seam, the first shopkeeper the player encounters in the game.

Before the events of Deltarune, Jevil was the court jester of Card Castle and was friends with Seam, the court magician. They performed acts together for the kings until one day Jevil met a mysterious being; ever since Jevil met this person he has descended into insanity. His growing insanity is what led to Seam banishing Jevil into the dungeon on the kings' orders, but in his eyes, Jevil was too fast for the kings and built a wall to "trap" the kings and now, he is the only one "free".

Jevil can be found on the ?????? floor of Card Castle, where he tells Kris, Susie, and Ralsei that he is lonely being "free" and wishes to free them as well. He tells them to find Seam since the latter knows how to create the key to Jevil's cell. Then the team has to find Broken Key A, B, and C and give them to Smith Malius. Smith Malius will combine them into the Room Key, and the team must go back to Jevil's cell and use the Room Key. After that, a small door will appear and Jevil invites them in, and Jevil says that he will play with them first and then play with the others. Ralsei asks what type of game they will play; Jevil then tries to attack them with a Devilsknife; however, the team dodges it. Jevil replies with a "simple numbers game", and that if their HP drops to 0, they "lose". After Susie and Jevil both compare each other to sharks, the fight commences.

Jevil has multiple attacks during his boss fight, most of which involve him using card symbols to damage the party. His battle has five phases.

Jevil has four attacks during this phase. First, he can teleport to random spots on the battlefield and fire volleys of spade bullets that advance linearly beyond the board (also revealing that he has two hands). He can also fire 10 large spade bullets that bound around the board in a spiral pattern towards the centre and beyond. These bullets move toward the middle in a spiraling manner, and their direction remains the same during the earlier phases. He can also cause bombs with hearts to quickly fall to the battlefield and explode, launching four hearts that go in square formations while rotating around the centre point, and fly towards the SOUL and go beyond. For his fourth attack during this phase, Jevil can launch four scythes that oscillate around the centre of the Bullet Board and rotate in either direction.

During this phase, Jevil can do the following attacks:

Jevil repeats his attacks from his prior phases.

If the player decides to attack Jevil, when they defeat him, Jevil will say "THE HAND OF THE KNIGHT IS DRIFTING FORWARD. SOON, THE "QUEEN" RETURNS, AND HELL'S ROAR BUBBLES FROM THE DEPTHS..." He then turns into the Devilsknife and goes into Susie's inventory as a weapon, therefore remaining with the team for the rest of the demo and having his revenge against the King for locking him away.

If the player decides to not attack Jevil, tiring him out and using Ralsei to pacify him near the end of his fight, Jevil will say that "FROM NOW, A NIGHTMARE WILL AWAKEN IN YOUR HEARTS. IN THE SHADOW OF THE KNIGHT'S HAND...". He then turns into the Devilsknife, disappears and gives the team a Jevilstail, and leaves to sleep for another 100 years.

Jevil is mentioned at various parts of Chapter 2. It is revealed that he had a Shadow Crystal, and Seam asks the team if they can keep defeating strong adversaries like him so he can stitch together something. Jevil himself will remain in the party as the Devilsknife or Jevilstail (depending on which way he was defeated). Equipping Noelle with the Devilsknife will cause her to notice that the weapon smiled at her, likely showing that Jevil is fully aware of his surroundings when in this form. Jevil's predictions also are seen with Queen's appearance and the ending of the chapter, where Kris stabs the ground to create a new Dark World. If Jevil wasn't defeated in the previous chapter and Chapter 2 was started immediately, he will turn into the Jevilstail or Devilsknife and can be found in the hole to the west of the Dark town. The Tasque Manager seems to know Jevil, and dislikes his chaotic character, telling the team to put away the Jevilstail/Devilsknife if they have it equipped before fighting her; It's also heavily implied Spamton G. Spamton knows Jevil and both fears and hates him, having a desire to surpass a "clown around town".

Jevil takes the appearance of an imp wearing a black and purple jester cap with black eyes that reveal yellow pupils when he's laughing. He has grey skin and yellow sharp teeth, and also has a black cape with a yellow and green collar. He sports a tail and green shoes. His head is attached to a spring as seen when he is attacked.

Though his personality before going insane is unknown, Jevil seems to be very childish, unable to say words without sometimes repeating them. Jevil thinks the world around him is a game and appears to have no grip on reality (as a matter of fact, Jevil's grip on reality is technically spot on considering he is a video game character). In his point of view, Jevil claims to the only one who is free, and that the rest of the Darkners are the ones who are all imprisoned. In truth, Jevil himself is the imprisoned one, elaborating his chaotic worldview. This might also be in a figurative way, as since he is imprisoned away from everybody, he can do anything he wants without consequence and that his choices don't matter.

Despite this, Jevil does claim to become lonely in his little freedom and desires others to play with, as shown with him being eager to play a simple numbers game with the Lightners. In battle, he is full of gleeful and crazed enthusiasm and is completely devoid of fear when Susie threateningly swings her axe, saying that he wouldn't have it any other way. At the same time, Jevil is also rather cryptic, saying that a nightmare will awaken in the hearts of the Lightners in the approaching shadow of the The Knight's hand and the Queen will return (this prediction turns out to be true in Chapter 2). He also somehow knows about the Roaring.

Jevil facing against the heroes. 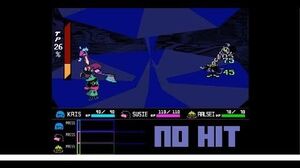 Deltarune - Jevil No Hit (Genocide)
The boss fight against against Jevil on a violent route. 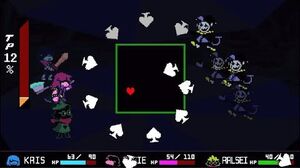 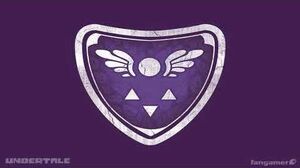