Defeat Fairy Tail and prove Sabertooth to be the strongest (formerly)

Jiemma (in Japanese: ジエンマ Jienma) is a villain from Fairy Tail. He was the Guild Master of the former strongest guild in Fiore, Sabertooth. He appears as the secondary antagonist in the Grand Magic Games arc, and later a minor antagonist in the Tartaros arc. He ended up leaving Sabertooth and was a member of the Dark Guild, Tartaros.

He was voiced by Eiji Miyashita in the Japanese version of the anime, and John McCalmont in the English version.

Jiemma is a tall, elderly man distinguished by his massive, extremely muscular physique, untarnished despite his advanced age. The man has long light hair which is tidily gathered on the back of his head and tied in a braid, which reaches down below his middle back, and is secured near its end in a large tuft; the thick beard and mustache covering Jiemma's lower face, linked to his hair by the Master's sideburns, are untamed, with several spiky strands jutting outwards from the latter one. He has marked facial features and a long, massive and mildly rounded nose. His sunken eyes, topped by light and bushy eyebrows, are very distinctive, being almost completely white, as if they lacked pupils, and has a black underlining around his lower eyelid; something which gives him an otherworldly look. Jiemma's small, dark Sabertooth mark is located in the center of his high, mildly wrinkled forehead. During his introduction, Jiemma was portrayed as having a very hairy chest, with his torso and abdominals sporting spiky hair in a shape reminiscent of a cross; this, however, wasn't present in his subsequent appearances.

Jiemma's outfit is Eastern in look: he wears a short, mildly loose and dark kimono with light edges and cuffs, secured around his waist by a light sash tied on the front with a simple knot, whose right side is casually left hanging over the side of Jiemma's corresponding leg, revealing part of the man's muscular torso. While the right part of the garment is sometimes worn normally, with Sabertooth's Master keeping his left arm in the sleeve, Jiemma has also been seen resting such arm in the front part of his kimono, casually hanging from it, and thus leaving the other sleeve hanging from his left shoulder hollow. His legs are covered by a very loose pair of light pants, which on the front of each leg bears a vertical line composed of many dark rhombs joined together and lined up. For footwear, Jiemma dons a simple pair of sandals, (black shoes in the anime) and his forearms are wrapped in light bandages. Circling the Master's massive neck is a necklace composed of many large, dark spheres, reminiscent of an over sized series of Buddhist prayer beads, and topping his head is a light headgear similar to an Eastern crown, with many vertical sections with pyramid-shaped tops surrounding a massive, central semicircle jutting upwards from it. All in all, his appearance resembles that of the mythical Tengu.

After joining Tartaros and undergoing a demonic transformation, Jiemma additionally sports large elf-like ears and now has his hair and beard extremely jutting out. He also dons a decorative tattoo-like design that is heavily concentrated on the left side of his torso and slightly spread throughout the rest of his body.

Jiemma is very strict, oppressive, authoritarian, and illiberal in his beliefs. He firmly believes that Sabertooth is the strongest guild in Fiore and wishes it to remain that way. When Yukino Aguria lost a match in the Grand Magic Games, he forced her to strip down in public, remove her guild mark, and leave the guild. He also does not seem to care much for his subordinates that fail to meet his expectations as he constantly called Yukino "trash" after she lost her match. Even Sting Eucliffe and Rogue Cheney, despite their fame, power, and numerous victories prior, were "trash" in Jiemma's eyes and were ordered to erase their Guild Marks after their single-handed defeat by Natsu.

It appears that Jiemma also dislikes animals and thinks nothing of, or, at the least, very little of them, as seen when he "killed" Lector, thinking nothing of it, even going as far as to claim afterwards that the guild had lost nothing, acting insulted at the very thought of animals in Sabertooth. Jiemma couldn't fathom why Sting would even be sad over the death of an animal.

Jiemma's obsession with power far overcomes his affection for his daughter, Minerva, answering to her inability to continue with her training with extreme cruelty. As someone who hates weaknesses, he used to verbally and physically abuse her whenever she cried, begged for forgiveness or followed other behaviors he labeled as "weak", going as far as beating her or forcing her to strip.

Not much is known about Jiemma's past, except that he used to train his daughter, Minerva, himself, going as far as to beat her whenever she couldn't keep up with his training, or even forcing her to strip and find her way back home from the forest all by herself.

After Yukino loses her match, Jiemma along with quite a few other members of Sabertooth assemble in the hotel where the Sabertooth members lodge in Crocus. Jiemma is extremely angry and argumentative at the fact that Yukino lost in her battle with Kagura in the Grand Magic Games while betting her, by Kagura then pitied, life on the match. Jiemma throws grapes at Yukino, and tells her to strip off her clothes, remove her guild mark, and subsequently excommunicates her from the guild.

Later that night, Natsu Dragneel invades the Sabertooth lodgings, having learned of what he did to Yukino. When Jiemma answers to his demands to see him, Natsu scolds him for his behavior and asks Jiemma whether he too will be kicked out if he loses to him. Jiemma orders Dobengal to fight Natsu, but the Sabertooth Mage is quickly defeated. Afterwards, Jiemma begins to clash with Natsu. However, the battle is soon interrupted by the arrival of Jiemma's daughter, Minerva Orland, making him surprised to see her return. Minerva reveals that she captured Happy, and Natsu decides to leave with Happy. As Natsu walks away, Jiemma comments on the young Dragon Slayer's fortitude.

Before the fourth day's third tag battle begins, Jiemma tells Sting and Rogue to make their victory overwhelming and to show them the power of the strongest guild. When Sting and Rogue activate White Drive and Shadow Drive, Jiemma states that the battle will soon be over, calling Fairy Tail a garbage guild. Following Sting and Rogue's defeat, Jiemma begins to boil with rage seeing two of his top Mages taken out by one Fairy Tail member. Unable to contain his fury, Jiemma pulls a terrifyingly angry expression, which doesn't go unnoticed by those sitting in the crowd around him. Becoming scared, the spectators flee in every direction, leaving Jiemma alone to seethe.

That night, in the Sabertooth lodgings, an outraged Jiemma bellows at Sting and Rogue for their defeat, beating them and saying that they must undergo excommunication. A scared Lector attempts to reason with him but Jiemma does not recognize the Exceed. Upon learning that he is also from Sabertooth, Jiemma, enraged at the thought of a weak cat being part of his guild, tells him to vanish, attacking him with a devastating blast. Outraged, yet also heartbroken, Sting suddenly attacks Jiemma, blasting him with a powerful White Dragon's Punch, creating a large hole through his torso.

As he lies on the floor, fatally wounded, he angrily warns Sting that he won't get away with this. He is surprised when Minerva nonchalantly tells Sting that he should become the new master now that he has demonstrated that his powers are superior to Jiemma's. When Jiemma asks his daughter what she's doing, she calls him a weak loser and orders him to shut up, reminding him of his "no weaklings are allowed in Sabertooth" policy.

It was later revealed by Sting that Jiemma survived his wounds, fleeing Sabertooth with his daughter, Minerva.

Just when Gray Fullbuster is about to finish Mard Geer off, Jiemma emerges from the Underworld King's frozen Prison Flower and takes the hit for him, sending Gray flying back. Now a Demon, he refuses the accusations that he was forcefully turned into one much like his daughter and explains that he voluntarily chose this power, to become even stronger. However, when Mard Geer calls him his strongest servant, Jiemma tells him to not misunderstand, and that after he finishes off the Mages, it will be his turn. He then easily blasts Natsu away and turns to Sting and Rogue, explaining to them that he has been longing to defeat them for a long time, before proceeding to hit their heads together. Sting and Rogue, however, fight back, promising that they will defeat him, and Jiemma urges them to fight him.

When Sting asks Jiemma whether he's responsible for Minerva's demonification, Jiemma proceeds to call her useless, since she didn't put to good use the power granted to her. He angers the two after explaining that his daughter was only a tool for him, but their powers leave Jiemma unaffected. He then attacks the two, before mocking them for turning Sabertooth from the strongest guild to a guild of weaklings. When the Twin Dragons tell him that Sabertooth cannot become strong unless its former Master disappears, Jiemma laughs at them, saying that strength lies in each individual rather than a team of people which, according to him, is the epitome of weakness. Jiemma, furious to hear his former guild members' version of strength, doesn't manage to defeat them, however, as their combined powers prove superior and Jiemma falls defeated to the ground. Jiemma lies unconscious when the fight between Natsu, Gray and Mard Geer takes place close to him. 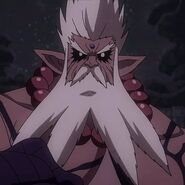 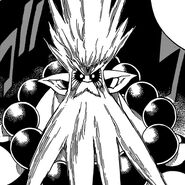