With Renga Capture the Land of Vegetables and kill the princess of the Landlord (failed).

Jiga was a villain of the Peddlers Escort Mission arc in Naruto. He was the middle brother of the three evil ninjas, the second man of the Janin.

He was voiced by Tadahisa Saizen in the Japanese version, and by JB Blanc in the English version.

Jiga drank a lot of iron as a child, so with his chakra he was able to turn the accumulated iron in his body and himself into a magnet.Jiga’s brother Renga planned a coup and takeover of the Land of Vegetables, which was also helped by Jiga and their younger brother Ruiga. With their minions, the three evil ninja easily captured the landlord's fortress. Renga killed the landlord who accepted his fate. Jiga said the landlord had too little money, but Renga remarked that he was a highly respected man. Jiga also noted that the landlord's daughter had been found, but someone defeated the two pursuers. Then Ruiga set out to find the girl until Jiga and Renga killed all the traitors who helped them in the coup. Ruiga found Uzumaki Naruto who defeated him with the help of his friends Yurinojō and Chōji Akimichi.

Jiga found the defeated Ruiga and remarked contemptuously „You got what you deserved!” Rugia asked Jiga to help him but instead he buried him alive with one of his magnetic jutsu. After killing his brother, he set out to find the princess. He found Naruto Uzumaki and they started fighting each other. Jiga proved to be too strong enemy with his physical strength and his magnetic jutsu and defeated Naruto. However, Hinata also arrived to help Naruto. Naruto warned the girl that this enemy was too strong and she could not defeat him. Jiga then used magnetic genjutsu aganist Naruto. The boy paralyzed and then Jiga used his magnetic power with paper bomb kunais. He buried Naruto with many rocks. Hinata helped Naruto. She became angry that the enemy defeated Naruto so simply and cruelly, so she decided to defend the boy. Jiga wanted to use magnetic genjutsu again, but Hinata defended it with the Byakugan technique the Eight Trigrams Sixty-Four Palms. Jiga was surprised and realized that his opponent was really ready to fight. However, even for Hinata, he was too strong an opponent and the girl began to flee. The evil ninja chased her and caught up with her in a short time. Hinata, while fleeing, realized his weak point when he saw that when she was fighting against Jiga in the valley, he was sweeping iron sand off his body. Hinata confronted the magnet master.

Jiga brutally wounded his fist the girl, but Hinata hit one of his tenketsu's points with the Gentle Fist. Then he jumped at Jiga and they both fell into a chasm. They survived, but Hinata was too hurt by Jiga's blow and she couldn't stand up. The magnet master decided to kill the girl, but then a lot of iron sand began to stick to him. Because the gentles fist, he was unable to control the strength of his magnetism and chakra and he became a permanent magnet. The iron sand completely covered Jiga's body and turned into such a strong magnet that an iron sand vortex was created beneath them. Hinata was too weak and fainted and they both seemed to be swallowed by the vortex. But then Naruto, Choji and Yurinojō arrived. Jiga was completely swallowed by the vortex, while Hinata was saved by Naruto.

Jiga was a tall, fat man with long dark hair. He had big nose, thick eyebrows and red streaks on the side of his face.

Jiga was a very greedy, conceited, contemptuous, overweening and evil ninja. He was cruel, sadistic and uppity in the fight. He was cunning and prepared, but he underestimated his opponents too much. While he didn’t necessarily want to kill his enemies first, he enjoyed when he was stronger or when his opponent was suffering. Jiga was also selfish and arbitrary. He even killed his own brother just because the Land of Vegetables splited only between Renga and him.

Jiga was a well-trained, prepared and powerful ninja. A dangerous opponent who defeated even Uzumaki Naruto.

Like his brothers, he had a unique ninjutsu. Jiga was able to turn himself or any metal he touched into a magnet, thus he could attract or stop any metal. He was even able to turn entire rocks and cliffs into magnets. Jiga was even able to create iron sand genjutsu that attacked the brain and was able to create an abnormality in the opponent’s brain that completely paralyzed him. However, his unique jutsu had a weak point. Jiga only temporarily became magnetic. He also had to regulate the strength of his magnetism. He couldn't use it too many times. If Jiga used it many times, he had to sweep away the accumulated iron sand from himself so as not to cover it and turn him into a magnet forever.

Jiga was a very powerful close combatan fighter. He had great physical strength and was surprisingly fast compared to his stature. His weapon was a kusarigama, which he used great and he was a very dangerous opponent with it. 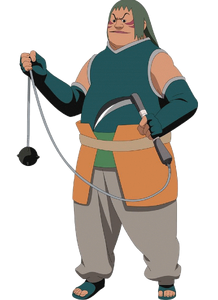