Power to turn people's selfish thoughts to monsters (all members)

The Jikochuu Generals, also called "The Selfish", or the "Selfish Generals", all have light blue hair and bright yellow eyes, as well bat wings behind their ears. Ira, Marmo, and Bel, originally known as the Jikochuu Trio, did the initial attacks while Leva and Gula, who answer directly to King Jikochuu, are brought in to take lead in the attacks before they are killed off by Bel in secret. From there, Bel places Ira and Marmo under his control using the Blood Rings.

Selfish Trio is a group consisting of three people, they appear early in the season. All the members of the trio have the power of making themselves into a Jikochuu, also called as Beast Mode. The members are:

Selfish Deputies are two people who appear as a big hand to the Selfish King. They both appear later in the series, and both appear in the same episode. They are stronger than the trio, and have the power to summon a Jikochuu together. Later in the series, they both die because of Pell's powers and later their souls are turned into rings called Blood Ring which are given to Marmo and Ira. The two deputies are:

Prior to the arrival of Regina, there are two other members who died before the events of the series. They are: 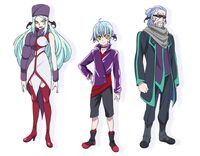 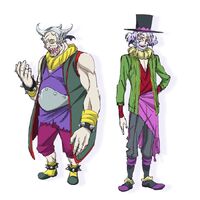 Add a photo to this gallery
Retrieved from "https://villains.fandom.com/wiki/Jikochuu_Generals?oldid=3920574"
Community content is available under CC-BY-SA unless otherwise noted.