Become the new Sidney Prescott (failed; she became infamous after that).

Jillian "Jill" Roberts is the main antagonist of the 2011 horror film Scream 4, the fourth installment of the Scream film series.

She is Sidney Prescott's egotistical and jealous cousin who wants to become as famous as her. To try to accomplish this, Jill becomes the next Ghostface and pretends to be a surviving victim of the ongoing massacre she starts.

Jill seems to be an innocent and sweet Woodsboro High School student who is targeted by the "Ghostface" serial killer like her famous cousin Sidney Prescott was 14 years earlier but it turns out that she is the evil and psychopathic mastermind of the latest murders. She snapped after having to hear all about Sidney when she was younger and she was extremely jealous. She comes up with a plan to kill all of her friends and her mother Kate so she can become famous for surviving a massacre like Sidney did. She enlists her friend Charlie Walker to help her commit the murders. At Kirby's house after the last victim Robbie is killed and Kirby is left for dead, Jill, dressed as Ghostface, stabs Sidney after she has gotten away from Charlie and takes off the mask to reveal herself to Sidney as the serial killer.

In the kitchen she tells Sidney how she plans to frame her ex-boyfriend Trevor Sheldon for the murders and then she kills him (taking her revenge because Trevor cheated on her), by shooting him in the groin and then in the head. Charlie and her then tell Sidney they plan on being this generation's Randy Meeks and Sidney Prescott and then Jill kisses Charlie, only to betray him by stabbing him in the heart then the stomach, revealing she meant to frame him as Trevor's accomplice and become the sole survivor, right before killing him. Jill stabs Sidney again and deliberately injures herself to make it appear that she had been attacked.

At the hospital, Jill inadvertently reveals that she attacked Gale by remarking to Dewey that when Jill writes a book about her survival, she and Gale would have the same wounds inflicted upon them by the Ghostface killer. Dewey then informs Jill that Sidney survived Ghostface's attack and would recover. Jill despite the whole pain she gave herself she manages to reach Sidney just as Sidney regains consciousness, before she can murder Sidney. However, Sidney fights back but is still not fully recovered, Dewey, Gale and Judy arrive and distract her saving Sidney. However, Jill points a gun at them, this momentary distraction allows Sidney to charge a defibrillator as Sidney and Gale outsmart Jill and yell clear as Sidney places it on the sides of Jill's head. After Jill suddenly comes back for "one final scare", still foolishly attempting to kill the group as she now completely unable to move fast by too much pain as Sidney shoots her in the chest finally killing her, putting an end to her pathetic life and foolish actions.

Despite her death, however, Jill seemed to have achieved her wish to become famous and to create a legacy of her own as the new generation's "Sidney Prescott", as the reporters outside the hospital refer to her as "an American hero right out of the movies". However, since Sidney, Gale, Dewey, and Judy (Gale because she's a news reporter and Judy and Dewey because they're cops) knew the truth, they told everyone and they realized that they were wrong about her. They realized that she was "a true American villain right out of the movies", and was officially confirmed to be the new generation's "Billy Loomis".

Jill stabbing Charlie in the chest. 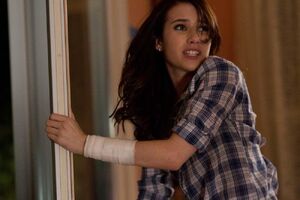 Jill injuring herself to make her look like a victim. 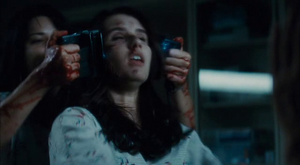 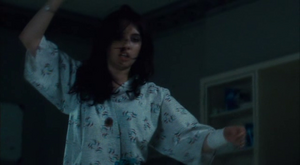 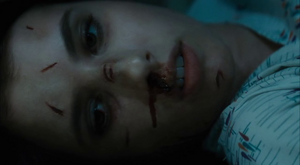