Kill Edward Scissorhands in order to have Kim for himself (failed).

James (simply known as Jim) is the main antagonist of Tim Burton's 1990 live-action film, Edward Scissorhands. He was Edward's arch-nemesis and Kim's ex-boyfriend.

He was portrayed by Anthony Michael Hall.

Wanting money to buy a van, Jim takes advantage of Edward's ability to pick locks and breaks into his parents' house. The burglar alarm sounds and everyone except Edward escapes. Despite Kim's mad insistence that they return for him, Jim angrily shouts they do not go back.

While the family is setting up Christmas decorations, Edward creates an angel ice sculpture. The shavings from the ice create an effect of falling snow, which Kim dances under. Jim calls out to Kim, distracting her, and Edward accidentally makes a cut on the palm of her hand. Jim says that Edward had intentionally harmed her and uses this as an opportunity to attack Edward in a jealous rage. Then he roughly shoves him out of the Boggs' house. When Kim sees this, she immediately breaks up with Jim and tells him to leave. Upset by the loss of his relationship with Kim, Jim goes to his friend's van to get drunk.

The situation gets worse when Kevin is almost run over by Jim's drunken friend. Edward pushes Kevin out of the way and in a state of excited panic, accidentally cuts Kevin's face, making witnesses think he was deliberately attacking Kevin when he was actually saving Kevin from being run over. Jim takes the opportunity to charge at Edward and attack him, but Edward cuts his right arm. When everyone hears the police siren, Edward flees back to his hilltop mansion and the neighbors form into an angry mob and follow him.

Kim heads to the mansion before the neighbors can get there and reunites with Edward, having learned about the truth of the events. Jim follows them and brutally attacks Edward, who doesn't retaliate until Kim angrily knocks Jim out with a pier and threatens to kill him if he doesn't leave Edward alone. However, rather than listening to Kim, Jim instead slaps and pushes her away from him, prompting a shocked Edward to get up on his feet and help Kim. Fed up with Jim's horrible treatment towards Kim, Edward angrily stabs Jim in the stomach before pushing him out of a window in retaliation, leaving Jim to fall to his death. 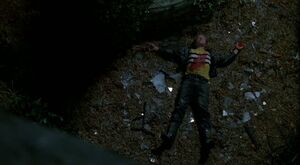 Jim's death
Add a photo to this gallery
Retrieved from "https://villains.fandom.com/wiki/Jim_(Edward_Scissorhands)?oldid=3283798"
Community content is available under CC-BY-SA unless otherwise noted.