James Henry "Jim" Blackwell is a minor antagonist in the Bates Motel episode "Dark Paradise". He was a parolee sent by Alex Romero to kill his stepson Norman Bates as revenge for killing his wife, Norma.

He was portrayed by John Hainsworth.

Jim Blackwell was born on April 6, 1967 and had lived in Canyon City. For unknown reasons, he was arrested and put in the same prison with Alex Romero, who had been arrested on account of perjury. Wanting revenge on his stepson, Norman Bates, for killing his wife and Norman's mother, Norma, Alex had Jim go over to the Bates Motel and kill Norman when Jim got paroled. Once Jim gets out, he skips his parole and tracks Norman to the motel as the latter is putting up shower curtains in a room. When Jim gets his gun ready to shoot, Norman slashes his hand and stabs him to death while under his "Mother" personality. "She" then hides Jim's body in a freezer in the basement, takes his wallet, and parks his car in the woods.

After Mother reveals to Norman Jim's body, "they" sail out to the lake and dump his body in, but not before Alex calls Jim on his cell phone, giving himself away. Jim's body was later recovered by the police, along with the body of Audrey Ellis, whom Norman had killed 2 years earlier. 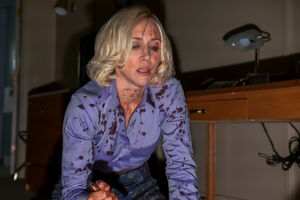 Jim's death at the hands of Mother.

Jim's corpse.
Add a photo to this gallery
Retrieved from "https://villains.fandom.com/wiki/Jim_Blackwell?oldid=3526911"
Community content is available under CC-BY-SA unless otherwise noted.