The Brave Little Toaster to the Rescue

Assisting Mack in his villainous plans.

Jim Bob is the secondary antagonist of Disney's 1997 direct-to-video sequel film The Brave Little Toaster to the Rescue. He is the assistant of Mack McCro.

He was voiced by the late Jonathan Benair, who also played the Black and White TV in the original The Brave Little Toaster film.

When Mack has shipped the lab animals so that he can take them to Tartarus Laboratories, Jim Bob is being asked by Mack if he could bum a lift. He acts in accordance to him, but not before giving the promised money to Mack. During the truck drive, Murgatroid's glass tank breaks into pieces after the truck goes over a small number of bumps in the road. Disturbed about having his glass tank rattled, the snake slithers over to Jim Bob and crawls up his leg at first and then his chest, and pops out from under his shirt, making him afraid. He then stops the truck and gets out of it, and he then waves wildly about wildly during the time that he complains that he cannot stand snakes on him. At the end, Mack and Jim Bob are arrested by the police for their crimes. 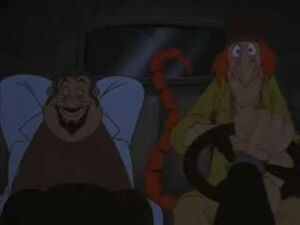