Jim McCabe is a former Soldier, who abused his special status while out in Afganistan. However he was also a Manticore, a very unusal type of wesen that was part Lion, part Scorpion.

Jim McCabe was posted in Afganistan in 2010, being a security contracter, he and his party was struck a deal that made him extempt from the law. As such they abused there status, bother the locals, causing problems. Then on November the eleventh they gang raped a female soldier. She filed a compliant to her superior, Colonel Desai. However they had already been transfered and thus escaped. Arriving back in America he went back to his security business and hired his party to work for him. However, his past began to catch up with him, when the woman, Frankie Gonzales, returned and began stalking and harrasing the party trying to force them to reveal the truth. Meanwhile, another Manticore began killing his friends.

Following the death of Roy Hurd, he realised that Frankie must have had something to do with it, however to cover the truth, when met by Detective Burkhardt and Griffen, he lied to cover his tracks and set them on a false trail of all Roy's contacts and customers. One of his friends Troy Dodge, who had been overcome with guilt since the begining but to afraid to talk, tried to spill the events, after telling his wife. Jim murdered them both to cover his secret. Later he was contacted by the Colonel offering him the last evidence of his crime if he met him, meeting up he took the evidence but as he was leaving the Colonel revealed it was him who killed the others. Realising what this meant, he confronted the other Manticore. The Colonel who was dying, and racked with guilt at his failure he decied to avenge Frankie himself. The two Manticore broke into a fight, although Jim managed to get the upper hand, the Colonel dodged his stinger and drew a conceled knife, stabbing his tail with it. They were interupted when Nick and Hank rushed in, taking advantage of this, the Colonel jumped at Jim, forcing him to stab him. As such Jim was arrested and imprissoned, his crimes coming out on the open, just as the Colonel had wished. 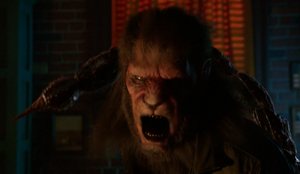 Add a photo to this gallery
Retrieved from "https://villains.fandom.com/wiki/Jim_McCabe?oldid=2442030"
Community content is available under CC-BY-SA unless otherwise noted.