Head of the Impossible Mission Force

Be the major player in a conspiracy (under the alias of Job).

James "Jim" Phelps is the main antagonist of the 1996 Mission: Impossible film. However he is a major character in the 1966 Mission: Impossible television series, as well as its 1988 revival. Throughout both series runs, he serves as the main protagonist. He is also the former mentor-turned enemy of Ethan Hunt.

He was portrayed by the late Peter Graves in the television series. Due to Graves not wanting his character to become the villain, he refused to play the role in the film. Thus, in the 1996 film, he was portrayed by Jon Voight, who also played Paul Serone in Anaconda, Mr. Sir in Holes, Thomas Reynolds in Enemy of the State, and Mickey Donovan in Ray Donovan.

By 1996, Phelps has become disillusioned as he believes he is no longer necessary, despite having served his country for over four decades. By this time, he has married a much younger woman named Claire, and has been given an entirely new team.

Finally snapping, Phelps convinces Claire to go along with his plan to sell sensitive IMF information to an arms dealer, Max Mitsopolis, for a large sum of money. He is almost caught, but manages to kill off his team during a Prague mission to stop the theft of a non-official cover (NOC) list of the IMF (which is later revealed to be a mole hunt) and frame rookie team member Ethan Hunt, who looks up to Phelps as a father figure.

For the job, Phelps hires disavowed IMF pilot Franz Krieger to help carry out the murders. In the end, Phelps, Claire, and Krieger successfully kill off three of their teammates as well as their target. During this, Phelps manages to fake his own death by getting shot and falling off a bridge.

Phelps then has Claire return to use her charms on Ethan, who has been successfully framed for the murders, as well as being the mole. Ethan concocts a plan to avenge the rest of the team and clear his own name by catching the real mole and stopping him, as well as Max. As the NOC list the team recovered in Prague was a fake, Hunt decides to steal the real list in order to draw the mole out of hiding. After making a deal with Max in exchange for some money, Ethan hires a couple disavowed agents for his mission. He chooses computer expert Luther Stickell, while Claire "suggests" Krieger.

After Ethan's plan succeeds, the IMF has his family framed for drug trafficking. After Hunt uses a payphone to alert the IMF of where he is (London), Phelps reveals himself to Ethan, claiming he survived getting shot. He then names IMF Director Kittridge as the mole. However, Phelps had underestimated Ethan, who is able to quickly determine that Phelps himself is the mole, and that he hired Krieger to pull off the murders, though he remains unsure if Claire was involved. When Hunt asks why "Kittridge" would do such a thing, Phelps uses his own reason: that he had believed he was becoming "a worthless piece of hardware not worth upgrading" due to the end of the Cold War. Hunt returns to the hotel his team is using for a temporary base of operations and, clearly distressed over what he has learned, lets Claire seduce him.

The next day, aboard a high-speed train, Phelps, realizing Ethan likely figured him out, hides as he watches Hunt reveal that Claire was in fact in on the treason. By this time, Hunt has given Max the real NOC list and is having Stickell use a jamming device to prevent Max from uploading it.

Phelps takes the money from Ethan, but Ethan gives Jim one last thing, he takes out his glasses, as Jim gets confused and gets a closer look, but turns out Ethan had Jim on a live camera in front of their boss Kittridge, as he sees him still alive and heard his cruel actions. Exposing Jim who is the mole the whole time. Shocked and enraged that Ethan ruined his plans, Ethan tells him it’s over and throws the glasses at him.

Claire tries to prevent Phelps from killing Hunt, causing Phelps to kill her instead. Ethan attacks him but Jim manages to knock down Ethan for a few seconds and cowardly flees. An enraged Ethan then gives chase to Phelps, who is using suction cups to make his way along the top of the train to the end, where Krieger is flying a helicopter to make their escape.

During the fight, Ethan manages to hook the tether of the helicopter to the train, forcing Krieger to pilot the copter into the Channel tunnel. After freeing the tether, Phelps motions for Krieger to simply pick him up with the bottom of the copter. However, Ethan hops onto the copter as well, and plants a piece of exploding chewing gum (a relic of the Prague mission) onto the copter, before jumping back onto the train. The gum causing an explosion which kills Krieger, and causes the copter to fall onto Phelps, crushing him. 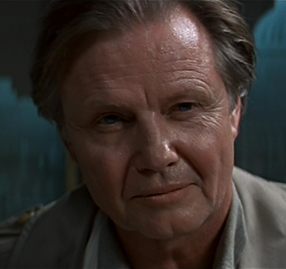 Phelps reveals to Ethan Hunt that he is still alive. 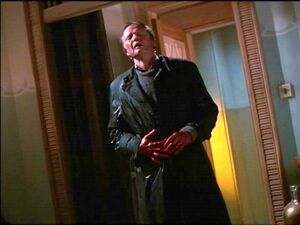