Usage of the Book of Chaos

Having his slaves work for him

Run the most powerful cult on the planet (ongoing)

Become a famous actor (succeeded; only in The Movies)

Jim Pickens is one of the three protagonists of the Call Me Kevin YouTube channel.

He appears as the main protagonist of TheSims Let's Play Series, the deuteragonist of the Tomodachi Life Let's Play Series and has also frequently appeared in many other videogames in Kevin's YouTube career. He is a serial killer and cult leader who wreaks havoc on numerous neighborhoods in The Sims 4 and leads the infamous "Jim's Cult" as the Dear Leader. He also appears as a famous actor in The Movies as himself in the Killjoy trilogy, and the remake.

In the few instances where he has a voice Kevin himself will usually provide it, while in both The Sims and Tomodachi Life his voice is provided through the in-game software.

Jim is an aging Caucasian male that has receding gray hair and beard, and brown eyes. He usually wears a white shirt, a blue cardigan and gray trousers and shoes, as well as small round spectacles. His hair was once brown and more full. He shown to be well built and fit, with 6-pack abs and a strong build.

Jim is notorious for his crimes against humanity. He had acquired a book that had been responsible for much of his murders; the Book of Chaos. This book contains a list of curses that Jim has used for different purposes, often times, for killing someone, other times for trying to distract the populace so he could commit another crime without any witnesses. Other means of his killing includes vendoring badly cooked Pufferfish Nigiri at restaurants he has owned, which has been responsible for a majority of his murders. More recent methods of killing included him strangling, butchering, and shooting other people. One case involving him kidnapping many people including Shrek, and he forced these people to murder each other until one lived, in which Shrek was the winner.

Jim, much like his father, Dick Pickens, also often times engages in womanizing. Where he would meet with women, and attempt (not always successfully) to start a relationship with other women. This has resulted in Jim fathering twelve children. Most of them never encountering Jim in person, or Jim being unaware of the encounters.

Jim Pickens was born to Dick and Janice Pickens, little to nothing is known about his life up to when he was 7 years old. At this age, this is when much tragedy would occur. His father, Dick Pickens, often would invite people to parties where he would trap them in their swimming pool, resulting in the partygoers drowning. The emotional stress Jim had suffered through, along with implied neglect, led to Jim refusing to attend school. This ultimately led to Jim being forced to attend military school for an unknown amount of time. Eventually, around the time Jim became a teenager (approximate age unknown), he was returned to his now widowerd father. Jim's relationship with his father worsened as Dick had interfered with a relationship that Jim had invested much into, by throwing a water balloon in his date's face.

Jim would eventually father many children, his first being Tim Pickens, not to be confused with his (possibly unrelated) cousin, a bald man who appears to have black eyebrows, he was forced to move out after Jim discovered he was pregnant, fathering the only grandchild of Jim's. His next known child was Scarlett Pickens, one of his few known daughters, and was unfortunately, not given much screen time. His next known (and most well known) child was Beejey Pickens, a black haired and obese man who often times donned a clown mask, he eventually died of old age. His next and final known child was Project Pickens, a blonde haired man who inherited Jim's vampirism and died due to sun exposure.

The day Jim's life took a drastic change was one day in the city of San Myshuno. When he moved in with Urp John's family, Urp John was a womanizer who had many children with the women around San Myshuno. Jim moved in intending on being a squatter. Eventually, Jim decided to move into his iconic home in Oasis Springs, where he had built a basement where he would have slaves paint paintings in their cells to make money to pay for the bills. Jim eventually acquired a book of curses called the Book of Chaos. Jim uses this book to kill other Sims in strange ways. Jim's home had many improvements, there was an eventual point Jim decided to live in the European-themed city of Windenburg. This was the base of many memorable moments in Call Me Kevin's playthrough. Jim decided to open a well renowned restaurant in the Rural Town of Brindleton Bay, where the food was only Pufferfish Nigiri, and due to the (intentional) limitations, this resulted in the Pufferfish Nigiri being badly made, which led to the deaths of several sims, including children. Jim's current residence is in the desert town of Strangerville, where he took residence in a mobile home for 1 day, and then took residence in a shelter hidden under a crashed Cargo Plane. Jim's quest to exterminate the motherplant that had been terrorizing the town of Strangerville ultimately led to his demise. The alien plant has indirectly avenged hundreds of sims. However, the next day, Jim was brought back as a ghost, and he alongside the team he brought along him had killed the Motherplant. More likely than not, Jim will be revived soon. As of April 21, 2019 (Which is Easter), Jim Pickens has been revived.

As of November 5, 2020 Jim Pickens was bored angry at the world he made into such a mess and decided to simply nuke the world. Since then he has been living with his friend Turg Turg and became a Sith then killed Kylo Ren. He also locked multiple children in his basement forcing them to knit for his business.

Jim Pickens is the leader of a cult named "Jim's Cult", where, in the beginning of its dawn, he had them create paintings in his basement in Oasis Springs. Later on, when he moved to Windenburg, he still kept this intention, but added on to it, creating a rule, to NOT look for frogs. As time moved on, Jim became less focused on his cult, and more focused on how much torment he can inflict on his fellow citizens. 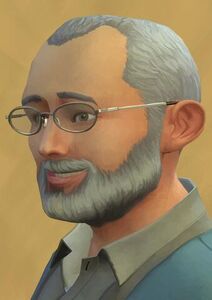 Retrieved from "https://villains.fandom.com/wiki/Jim_Pickens?oldid=4205434"
Community content is available under CC-BY-SA unless otherwise noted.