Corky James "Jimbo" Jones, is one of the major antagonists in the TV animated series The Simpsons and a supporting antagonist in the 2007 theatrical film The Simpsons Movie. He is one of the bullies at Springfield Elementary, with Dolph Starbeam, Kearney Zzyzwicz and Nelson Muntz. 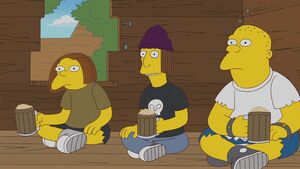 Retrieved from "https://villains.fandom.com/wiki/Jimbo_Jones?oldid=4209578"
Community content is available under CC-BY-SA unless otherwise noted.