Defeat the Liveman and conquer Earth for Volt.

Their primary weapons are ax-like objects that can be converted into a gun for ranged attacks, or dispense a wire that can be used as a whip or to grapple things. They also pilot the Boffler Fighters. Their body parts are also capable of continuing to attack even after being dismembered.

In episode four, Doctor Mazenda creates a new type of Jimmer called "Dummy Man" that is capable of disguising itself as human.

In one notable instance, in episode 13 a "Dummy Man" Jimmer went haywire after being exposed to the poison gas Volt was developing and broke free of Volt. After escaping, the rogue Dummy Man was found by Megumi and Colon and taken in by them. The Jimmer ended up falling in love with Colon and ultimately sacrificed itself to save Colon from Volt's Poison Gas Brain

Several Jimmers were part of an army of past enemy grunts that were fought by the Gokaigers in Los Dark's ghost dimension which housed the 1500 spirits of the villains defeated by the Super Sentai. After losing some of their number in an initial skirmish, the Jimmers merged with the other remaining grunts to form the Combined Combatant. Though the stronger opponent, the Combined Combatant proved to be unstable due to internal conflicting among the grunts composing him over who got to finish the pirates off. Taking advantage of this, the Gokaigers used the Battle Fever J Ranger Keys to destroy the Combined Combatant with the Penta Force cannon.

Jimmers have greenish gray bodies. Their heads are protected by a white helmet which conceals their true mechanical faces, which are silver and contain two red eyes. 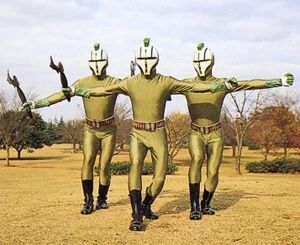 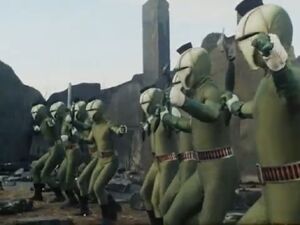 A horde of Jimmers marching. 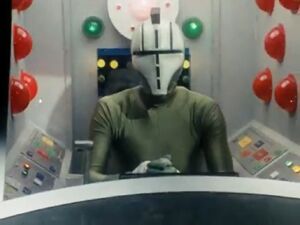 A Jimmer piloting a Boffler Fighter. 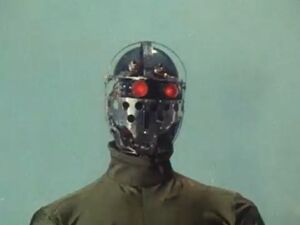 A Jimmer's face beneath its casing.