Seek out information from the Ark Society and Providence in order to gain fame.

Incompetent Egotist
James "Jimmy" Chen is an Elusive Target in HITMAN 2 (2018). He was a journalist who reported on celebrity culture, regardless of its validity.

Jimmy Chen was a journalist who was originally a failed actor, who was denied because of his poor acting skills. After becoming a journalist, Chen vowed to use this to gain fame and seek revenge towards those who denied him, even using fabricated tales to boost the fame of his tabloid.

A notable crime he did include leaking information about a pharmaceutical company and fabricating a scandal, causing a media frenzy. He got this information about their anti-depression medicine much earlier already, but chose to leak it and exaggerate it only when the company were at its lowest (as well as fabricating a lot of information, to further vilify them). This caused one of the company's female patient to commit suicide due to such conceal.

The client who ordered Chen's assassination was the brother of the aforementioned female patient, who hired the ICA and Agent 47 to eliminate Chen. During the mission, Chen can be seen disguised as a waiter and later a VIP guest of the Ark Society, but his act was still a silly charade.

He could be seen chatting with other guests, who bluntly pointed out the faulty in his words. Above all, he could be seen whilst taking photos nonchalently on the Ark Society's artefacts whilst boasting about the success it would bring upon him. That caused 47 and Diana Burnwood to recognize him and later eliminated him.

Chen is a greedy and petty person. He was arrogant and egotistic, furiously mocking those that denied his dream of being an actor. He was also unscrupulous in the information he gathers, with him releasing news not when it broke, but when it was beneficial to him.

Whilst being egotistic and overconfident about his acting, his acting and disguise were ironically a collection of charade, incompetence as well as failure, judging from his awkward conversation with 47 and other guests. It firmly cemented his incompetence, stupidity and narcissism. 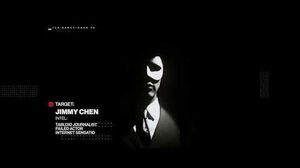