Blade of Lora and Ornelia (formerly)

Capture the Aegis to use its power to wipe out mankind and the Architect (failed).

Jin (also known as Shin in Japanese) is the central antagonist of Xenoblade Chronicles 2 and the protagonist in the prequel story, Torna ~ The Golden Country.

He is a masked swordsman that serves as the leader of the organization known as Torna, with Malos as his second-in-command. Prior to this, he was once Lora's personal Blade that fought alongside Mythra and Addam in the Aegis War.

He was voiced by Takahiro Sakurai in Japanese and John Schwab in English.

In general, Jin is a tall, well-built man with light silver hair coloring and blue eyes. In his regular form, he wears a mask to hide his Core Crystal (which was once blue before turning red, after "consuming" Lora). He also wears what appears to be a trenchcoat-like outfit.

In his true form, he retains his physical features but features a large scar on his chest. He also appears to have a black, armor appearance with neon blue lights around his body.

Jin initially appears to be cold, silent, and equanimous, mainly focused on achieving his goals of destroying all of mankind. However, this is only a masquerade of his true feelings of sorrow and pain. Before the death of Lora, Jin was a kindhearted and loyal man who swore to protect Lora at all costs.

Jin was born over five hundred years ago where he was awakened by a girl named Ornelia. Together, the two served the Colony Defense Force, helping people and their villages. He also spent his time writing in a journal, sharing his thoughts about who he is and the existence of the Architect. Eventually, Ornelia passed away, and Jin turned back into a Core Crystal.

Jin's Core Crystal would be preserved in a castle by a royal family until it was stolen by Gort. That night, Lora, a young girl and the daughter of Gort's maid Rynea, accidentally resonated with the Core Crystal, reawakening Jin. Angered that she awakened him, Gort threatened to kill her as he prepared with a knife in his hand. However, he was swiftly dispatched by Jin, before he could make his move. Jin then comforted the young girl, swearing that he will protect her. Since then, Jin has served as Lora's personal blade, accompanying her and Mythra in the Aegis War against Malos.

Around this time, the two met a young boy named Mikhail, in which they ended up taking under their care. Jin and Lora met an old man who told him he knew him and Ornelia when he was young, and that his old house was still standing. Out of curiosity, Jin went to investigate where he eventually came across his journal.

After the war, Jin stood by Lora's side as she was made as an official Driver in Torna. Later on, Amalthus ordered his Indol army to attack Torna. Both Lora and Jin took part in the battle, but as a result, Lora was killed. Before she could truly perish, Jin decided to "eat" her heart and transform himself as a Flesh Eater, refusing to forget his memories with her. As a result, Jin was able to save Lora, but he refused to allow her to pass away in time, and so, she was kept in cryogenic stasis.

Eventually, Jin and Malos met each other in an alley, where the two formed a friendship. Together, they founded the organization named after the deceased Titan, Torna. Jin swore that he would set all Blades free from humanity, and in order to do so, he must hunt down the Architect to kill him and wipe out mankind.

Years later, Jin invaded a military ship, where he came across Akhos and Patroka. He recruited them into his organization. Around this time, he dispatched another group of soldiers, and eventually met Nia as well, recruiting her to Torna.

Jin, along with Nia and Malos, was tasked on a mission by Bana to salvage a wrecked ship that contained the Aegis. They hired Rex to assist in salvaging and took off as they looked in the wrecked ship. They eventually came across the Aegis, but as Rex begins to resonate it, Jin swiftly stabs through his chest, effectively killing him. Rex, however, was eventually resurrected by the Aegis's Blade, Pyra, and fought Jin and Malos, with Nia on his side.

Jin later traveled on his own to the ruins of Judicium in Temperantia, where he hijacked an ancient Titan weapon. He begins to go on a rampage with it, attacking Uraya's military forces. Rex and his friends eventually confront him on top of the weapon where they defeat him and destroy the weapon's core. Before he could retreat, however, he manages to kill Fan la Norne, regrettably.

Jin encounters the group of heroes once again at the Genbu Crown, where he wishes to receive the Omega Fetter, as well as the Aegis. He proceeds to take them on in his true form, overpowering them due to his elemental manipulation and incredible speed. He was eventually able to defeat them, having them at their knees. Jin then prepared to kill Rex, but Pyra stopped him, threatening to kill herself with the Artifice Siren. Pyra was able to rationalize with him and thus, he spared Rex, then proceeded to leave with her.

After Malos received his full power once again, Jin and Malos fought Rex and his companions once more at the Cliffs of Morytha. Rex was able to defeat them both when he unleashed the true power of the Aegis. He and the rest of the heroes have knocked off the cliff after a battle between Ophion and Siren.

With no other choice, Jin decides to form a temporary alliance with Rex and his companions. As they travel through the Land of Morytha, he reveals that it was Amalthus that was responsible for the destruction of Torna. Eventually, they make it the World Tree where Torna manages to find him. They were prepared to kill Rex's party, however, Jin called off the attack.

Eventually, Jin and Malos traveled together in the World Tree. Jin decided to sent Malos off on his own, wanting to confront Rex once more. Eventually, Rex confronts him, in which Jin wants to see whether the world will choose him or Malos. As they battle, Jin states that he has no clue why Rex is fighting so hard for humanity's sake, believing that they will end up destroying Elysium. Rex, however, was able to convince him that Blades and humans were no different from each other, and instead were equals.

Akhos and Patroka arrive to assist Jin. They then prepare to kill Rex and his friends, but Jin tells them to stand down, stating that they have done what they needed. Patroka then proceeds to get aid for him, but she is immediately killed by Amalthus, who has absorbed the power of the Core Crystals. Jin is then forced to watch as Amalthus then proceeds to kill Akhos as well, as he still remains weakened from battle.

Amalthus is eventually defeated by Rex. Amalthus proceeds to destroy the World Tree, but he is stopped by Jin, who uses the remaining fraction of his power, freezing him to the wall. After Amalthus passes away, Jin proceeds to fade away into the light as well.

In Super Smash Bros. Ultimate, Jin appears as one of the game's many spirits, being first introduced in Pyra/Mythra's spirit board. An Ace-rank Neutral-type spirit, he makes the user faster upon use. In his spirit battle, the player must fight against Cloud on the Ω variant of Summit in a stamina match. Furthermore, the arena is coated in freezing ice while the Cloud has its movement speed raised in said spirit battle.

Cloud being the puppet fighter references both Cloud and Jin being designed by the same character designer, Tetsuya Nomura, and sharing the same Japanese voice actor, Takahiro Sakurai. The stage and Ice Floor hazard references Jin's element and his ability to use it. The speed rule references Jin's ability to move at the speed of light. 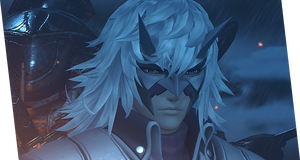 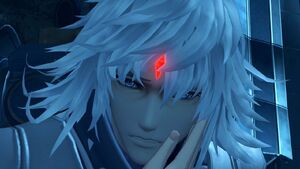 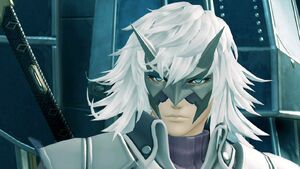 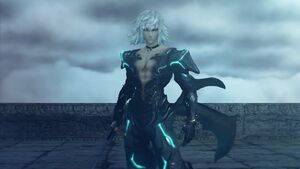