Trying to destroy the Rangers.

Jindrax is the Master of Blades and one of the two secondary antagonists of Power Rangers Wild Force. He faithfully serves his Master as the Duke of Orgs and is the best friend of the Duchess Org Toxica. Jindrax is the (former) archenemy of Taylor Earhardt, the Yellow Wild Force Ranger.

He was voiced by Richard Cansino for four episodes, and later his US suit actor Danny Wayne Stallcup, who played Jindrax in his human disguise prior to the series beginning.

Alongside his fellow Duke-ranked Org and eventual lover Toxica, Jindrax served Ancient Master Org during the war against Animaria and entire humanity 3000 years ago. Unfortunately, their leader's downfall at hands of Merrick who utilized the power of Predazord via. the legendary cursed wolf mask (the same mask which revealed to be the prison in which Zen-Aku's spirit was sealed) saw their kind being subsequently hunted down and either sealed away or destroyed, forcing the duo to escape and masquerade as humans to evade the same fate. To Jindrax's dismay, Juggelo, his brother and fellow Org he founded a duo called "Team Carnival" with owing to their jester-like appearance, was among sealed Orgs.

For the next centuries, Jindrax and Toxica lived incognito among humanity and apparently took up several jobs to make a living. Among such jobs being implied founders of a delivery company called Org Express which had its own official credit card and more recently, members of Turtledyne Laboratories' branch of Turtle Cove's animal control agency presumably as part-timers. Though content with their current lives, it became apparent they missed old days badly, something which brought up by a bad day in which animals they recently captured for Turtledyne Laboratories got escaped thanks to future Red Wild Force Ranger Cole Evans who recently arrived at the town. A glimmer of hope appeared in form of Turbine Org flying above the lab, much to their delight as the sighting marked the return of Master Org and the rest of their kind, that they ditched their disguises and set out to rejoin the renewed war against humanity.

From there, Jindrax and Toxica joined the revived Master Org upon meeting him at their old stronghold Nexus and struggled to gain his favor by assuming support role for every Org commanders he deployed against Wild Force Rangers, successors of five elite Animarian warriors who empowered by Morphin Grid to no avail. Despite living among humans for a long time, their skills were as sharp as ever, posing a challenge to the Rangers.

Yet, things aren't quite right for the duo as in the middle of their struggle, Toxica was bothered by human scent she caught every time Master Org was around. Jindrax remained skeptical, but nonetheless got along with his partner's investigation that brought them to their leader's chambers in which they found human lab paraphernalia and an old picture of a man whose visage suspiciously resembled Master Org's own. Just then, Master Org showed up and berated the duo for intruding inti his chamber, leading to a one-sided confrontation culminating to the two being brainwashed into more powerful yet subservient versions of themselves, Super Jindrax and Super Toxica, but not before Toxica blasted Master Org's helmet off, revealing him to be the corruped human Viktor Adler, much to Jindrax's shock.

Eventually, Jindrax and Toxica were freed from their brainwashing at the cost of losing their power-ups in courtesy of a blast from Cole's Animarium Armor. Knowing that they needed help from the "real" successor of Master Org, the duo traveled into the desert for an old Org tomb in which the General Org Mandilok was buried. With the revived Org general on their side, Jindrax and Toxica disposed the already depowered Adler and seemingly killed him for good, though the duo later regretted their decision in seeking Mandilok's aid as his mistreatment on them made him an inadequate inheritor of Master Org title.

When Juggelo joined them in the fight against the Rangers, Jindrax used magic beans within Toxica's staff to revive him in his giant form upon the latter's defeat via. their Jungle Blaster. In a bid to help his brother, he ate the same beans to enlarge himself despite Toxica's warning of his giant state would be permanent. Sadly, Juggelo ended up losing in courtesy of Merrick's interference and worse, Jindrax unexpectedly returned to normal after burping up the seeds. To comfort him, Toxica offers to take Juggelo's place to keep "Team Carnival" alive.

The duo's worsening trust with Mandilok which affirmed the futility of gaining the latter's favor and worse, seeing how the third Master Org disposed Toxica in cold blood, the disillusioned Jindrax abandoned the Orgs and left to fend for himself. While in hiding, Jindrax unexpectedly contacted by Toxica from Spirit World via. Nayzor's mirror in his possession in which she revealed the means to revive her (powering up her severed horn). Knowing what to do, he formulated the plan while walking through the shopping district of Turtle Cove since he knew the Rangers' Jungle Blaster should do the trick. Stumbling upon a fishing store, Jindrax bought a fishing rod using his business card to pay with (since he didn't think to fill his wallet with some money) and then seemingly assisted the Rangers in defeating Locomotive Org so he could expose Toxica's severed horn with their Jungle Blaster. The plan succeeded, and Jindrax enlarged the Org to cover his escape. Using the fishing rod and Nayzor's mirror, he successfully brought Toxica back to mortal plane with her newly restored body and horn.

Later that night, the duo settled to do something new with their lives, though they need to free Princess Shayla first; the reason why Master Org ordered her capture was so he could use the power of her necklace for sinister purposes that included getting back at them. Realizing the gravity of their situation, Jindrax got along with Toxica's plan to warn the Rangers and join forces with them.

Meeting up with the wary Rangers, Jindrax and Toxica informed them about their base Nexus' nature in which it is a maze only Org can navigate without any issue and recently had a force field placed over it by the returned Ancient Master Org who had since inhabited Viktor Adler's corpse. Said force field was generated by three statues that must be destroyed in order to dispel it thus may very well guarded. For these reasons, the Rangers had little choice but to let their uneasy allies assisting them. The plan worked and the duo managed to evacuate the Princess, but Toxica didn't foresee the statues' guardians being the revived Retinax, Nayzor, and Mandilok that Taylor wondered whether their unexpected allies set them up. Despite this, the Rangers emerged victorious just as Jindrax, Toxica, and Shayla stumbled upon Viktor Adler's floating husk disintegrated into sand, much to their confusion, though they had little time to figure out why with Nexus collapsing from Ancient Master Org's latest ritual.

Despite their tension, Jindrax and Toxica buried their hatchets with the Rangers and parted ways without further conflict. As they travel the world together in search of their new place, Jindrax couldn't help but express a pleasant surprise over his delight from helping someone, in which Toxica sarcastically responded not to get used to it.

Jindrax is shown to be a comic relief who proved to be no slouch in combat befitting to his status as a Duke Org. That's not to say he had no insecurities over his abilities since he perceived his friend Toxica as the more competent of the two owing to her ability to enlarge Org warriors they accompany against the Rangers. It is also appeared that Jindrax had a crush on Princess Shayla (which Toxica seemed to be fairly jealous of) despite his aforementioned partner being his true love all along. In fact, he became disillusioned by his superiors' treacherous and heartless nature after witnessing Mandilok sacrificed Toxica in cold-blood and decided to desert the Org army for good thus agreed with Toxica about starting anew and finding a better place for people like them, this time for good.

As the master of knives, Jindrax usually fights with daggers as his weapons of choice. 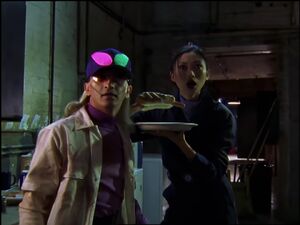 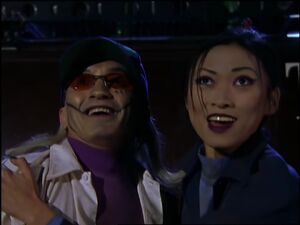 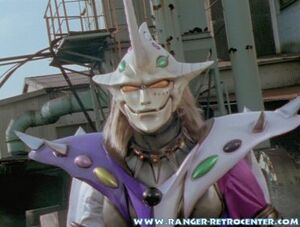 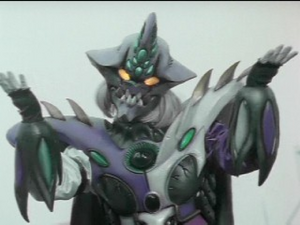 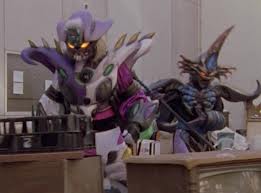 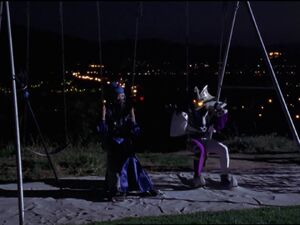