Stretching his limbs for combat from distance
Flight
Superhuman strength

Listening to the souls of his devoured victims wailing in torment on the back of his shell.

Jinmen is an antagonist who appears in Devilman. He is a large turtle demon who eats human beings and has their faces appear on the back of his shell, writhing in pain as part of Jinmen's sadistic form of pleasure. Although weaker then most other major enemies, Jinmen proved very difficult to fight as Devilman would have to kill all the humans that had been attached to the turtle's shell.

Jinmen has voiced by the following actors in various works:

Jinmen is arguably one of the most depraved, repulsive, and perverse villains in Devilman. He is a completely vicious sadist, who revels in the suffering of human beings and enjoys tormenting them psychologically, as evidenced by his macabre habit of keeping their still-living faces on the back of his shell after eating them. Jinmen would compare the faces growing off of his back to the tattoos which human beings paint on their bodies and happily flaunts them in front of his adversaries. This was part of Jinmen's scare tactic; by having his enemy cower in fear at the sight of his kills, or in the case of Akira Fudo cause reluctance in fighting Jinmen out of concern towards the several humans attached to the demon turtles body.

In a radical contrast to other demons in the series, such as Sirene, the Demon Bird, and Kaim, both of whom displayed human traits and qualities despite being demons, Jinmen is shown to have an iniquitous and savage side of demons and no redeeming qualities. In fact, Jinmen considers his actions of keeping his prey alive, as part of his body, as being a form of "kindness". By his logic it is a sin to kill and immediately after eating prey, so instead Jinmen opts to devour his prey while they are still alive.

Jinmen appears during the manga's third volume. He and the demoness Aleda lure in a huge group of people, including Akira's friend, Sachiko, into a train and drives inside a giant demon's mouth. Jinmen possesses the train's conductor, while Aleda wears an overcoat to hide her demonic body. Inside the demon's body the two ambush the civilians and eat them alive. Sachiko and the several other passengers who are devoured by Jinmen have their faces grown on the back of Jinmen's shell. Later that evening, Jinmen calls Akira on the phone and reveals to him that he is holding Sachiko hostage. In response, Akira Fudo confronts Jinmen at a playground that very night. Sachiko tries warning Akira to back away from the fight while he still could, telling him that she has already died. Akira is horrified by Jinmen's shell as it contains every soul of the innocent people he's eaten and is even more horrified and angered after seeing Sachiko's face at the back of his shell. Blinded by anger, Akira transforms into Devilman and attacks.

Devilman tries to battle Jinmen but is hesitant to kill him because he doesn't want the people at the back of Jinmen's shell to die. His first strike against the demon causes Devilman to murder one of the faces and wounds several others. Jinmen then flies towards Akira in an attempt to crush him. Sachiko tells Akira not to worry about her dying, so he can focus on killing Jinmen. Now without any hesitation left in him, Akira punches Jinmen in the back of his shell, causing Sachiko to die, which angers Akira to the point of him tearing off the demon's shell, thus killing Jinmen instantly.

As one of Devilman's most outrageous enemies, Jinmen has been incorporated in several other media based on the original manga.

After being killed in the original Devilman manga, Jinmen is revived in Shin Violence Jack, as he possesses a soldier and adopts a pole as his weapon.

A group of researchers are exploring the ice caves of the Himalayas, when they come across several demons. Among these explorers are Akira's mother and father. Jinmen makes a brief appearance as a shadowy figure which ambushes and devours some of the scientists.

Jinmen makes a full appearance during the first quarter of this OVA. His battle with Akira takes place, contrary to the manga, before Akira's fight with Sirene. After the events of the last OVA, Akira has become Devilman and fights demons to secure humanity's future. At this time, Jinmen has fused Akira's mother to his shell and uses her as bait to lure Akira into a trap. Jinmen fights Devilman inside an abandoned, and partially flooded, subway station. At first, the demon turtle has the upperhand, with Devilman refusing to hit him out of fear of losing his mother. Jinmen attacks him instead, mainly by propelling himself at the devilman at high speeds. Jinmen also stretches his arms and burns of Devilman's skin with his fiery touch. However, Akira's mother insists that her son kill the demon by killing her as well, asking him to perform a mercy kill for every soul attached to the monster. Although initially reluctant Akira has no other option but to plunge his hand through his mother's face and crush Jinmen's internal organs. Akira laments over his mother's gruesome death, his tears falling over her face which remains attached to the demon's shell.

In this incarnation, Jinmen is an independent agent of Lord Zennon' s demon armies. He acts as a serial killer named Mr. Death-Mask, devouring helpless humans and demons. This version is drawn in a much more draconian style, with a more pronounced beak and aquatic membranes around his fingers. He is also shown to be a provocative and lecherous necrophile in Devilman Grimoire, where he has sex with Illuge's lower torso after eating her upper half.

In this OVA series, Jinmen's role and battle against Devilman are identical to the events seen in the original manga. As part of the first episode's prologue, Jinmen vs Devilman takes place at the same time as Apollo's fight against Jo Shimamura, a.k.a. Cyborg 009. The only noticeable difference is the fact that Jinmen's is skin is now colored red instead of green. This is also the only other time, aside from the manga and Grimoire, in which Sachiko is eaten by Jinmen.

Jinmen is also featured in the Netflix original series Devilman Crybaby, which is a contemporary adaptation of the 1970s manga. As was the case with the Devilman OVA series, Jinmen devours Akira's mother but also took possession of his father. His battle with Devilman plays out as it did in the manga, except that the events take place inside a hangar at an airport. Devilman kills Jinmen after being coaxed into it by Ryo and his desperate mother.

In this three-part crossover OVA series the characters appearing in Devilman, Mazinger Z, Getta Robo and Violence Jack appear as chibis, caricatures with diminutive bodies, oversized heads, and silly personalities. Jinmen plays the role of comic relief, as opposed to his usual villainous casting. Much like his manga counterpart chibi Jinmen tries to kill Devilman and attach the hero's head onto his shell, which is inhabited by the heads of several farm animals: a cow, a pig, a chicken, dog, cat, and a pond frog. However unlike his manga portrayal, the chibi Jinmen isn't actually evil, but rather an attention seeker. He intended to kill Devilman in order to gain praise from his fellow demons, a big promotion from his superior, Demon Lord Zennon, and further love from his already supportive family (a wife and daughter who are also turtles).

Akira, Ryo, and Miki encounter Jinmen in a forest, who at first tries intimidating them with the screams of the dead animals off of his back. As the demon turtle leaps towards the heroes, he falls on his chest and is unceremoniously beheaded by Miki with a kitchen knife. The rest of the demon's body is then cooked up into steak and eaten by them. For the remainder of the series, Jinmen remains a disembodied talking head who reluctantly travels with Akira and Miki around the chibi world. He at first manipulates Akira into feeding him by threatens to reveal Akira's identity as Devilman to Miki, unaware that she had read the Devilman manga. He also provides Akira with the knowledge that Amon (Akira's demon half) had been engaged with the demon bird Sirene, who had abducted Miki the night before.

During the second episode of the series, Jinmen travels with Akira and Miki to Mazinger World, where they befriend Koji Kabuto (the main protagonist of Mazinger Z) and Sayaka Yumi. In the latter part of the episode, Jinmen helps Koji repair the Mazinger Z mecha after a fierce battle against Satan/Ryo and Dr. Hell's evil mechs. The two are attacked in the Mazinger's hanger by Dr. Hell's minions: the cyborg Count Broken and the gynoid Gamia Q3. Because Count Broken was also a disembodied head with a remote-controlled body, Jinmen mounts himself on the body's shoulders takes control of it. His newly acquired mobility is shortlived, however, as Gamia attacks both him and the count for having peeked at her nude body. She only paused from her attack do to the arrival of Sayaka Yumi's mech Aphrodite A. As it turned out, Gamia Q3 was emotionally and amorously attracted to fellow female machines.

Jinmen is lastly seen in the final episode of CB Chara. Satan had discovered the truth behind the chibi world, that it was a pastiche universe created by an infantile God with preexisting beings from other universes, such as the Devilman and the Mazinger Z worlds. Jinmen is used by Satan as a voyager to the Mazinger universe in order to prove his theory. Unfortunately, Jinmen kept his eyes closed during the visit so he could not prove Satan's claims. Jinmen and Koji are later left stranded on the newly created Violence Jack part of the chibi world after Satan is defeated by God. There they meet the titular Jack, who tells them that they must return to their respective parts of the chibi world and live their lives in peace. As such, Jinmen, whose body began growing back, returned to his family to live out a happy life, although he was embarrassed and infuriated that his daughter found him cute.

Like all demons in the Devilman series, Jinmen possesses the power of merging his body with animals, plants, and inanimate objects in order to gain their characteristics. He can even take possession of human beings, but only those who have abandoned all forms of rational thought and act solely on instinct. Jinmen uses this merging ability while devouring human beings. By eating live humans, Jinmen can grow their heads on the surface of his back shell. The human beings are kept alive and perfectly aware of their surroundings, but unable to oppose him and constantly feel dread as a result. In addition to these abilities, Jinmen can eject flames from his shell (his hind legs) giving him the ability to fly.

During his time in Hell, Jinmen could detach the human souls off of his shell and have them fight for him. Even after being "killed" Jinmen would simply be reduced into a small turtle that would grow back to normal size after having devoured enough souls.

In the OVA Devilman: The Demon Bird, Jinmen has the ability to extend his neck, arms, and legs longer and he has very strong strength. He also has the ability to make the palms of his hands incredibly hot and often uses them to burn and harm people, plus he can fold his arms and legs in. 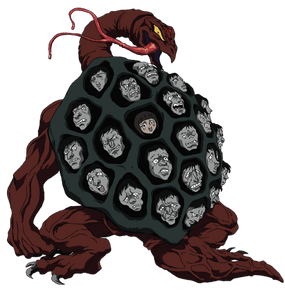 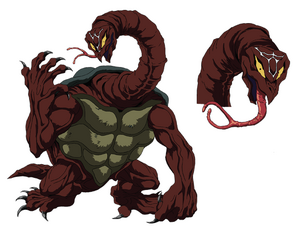 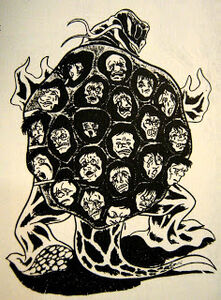 Jinmen in the manga. 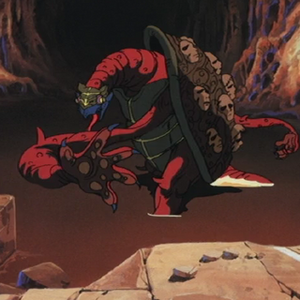 Jinmen in the OVA. 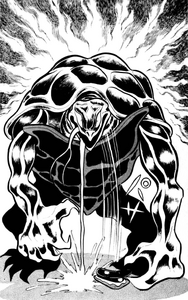 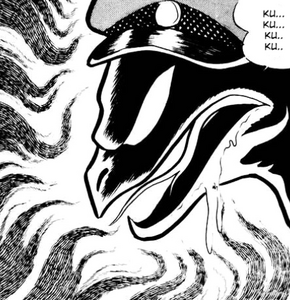 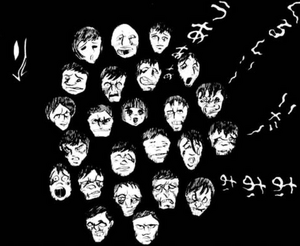 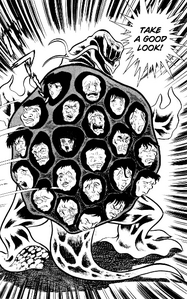 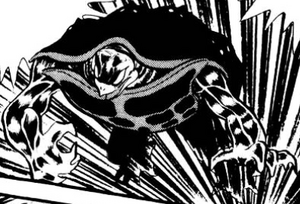 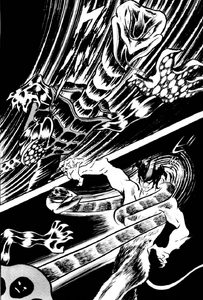 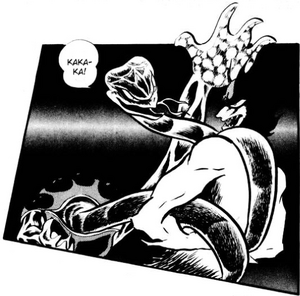 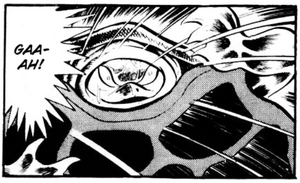 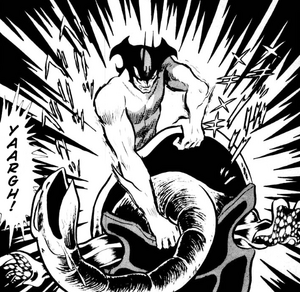 Add a photo to this gallery
Retrieved from "https://villains.fandom.com/wiki/Jinmen?oldid=3817698"
Community content is available under CC-BY-SA unless otherwise noted.