Villains Wiki
Register
Don't have an account?
Sign In
Advertisement
in: Female, Hero's Lover, In Love,
and 32 more

H.I.V.E Academy student and leader of the H.I.V.E. Five (formerly)

Jinx is a major antagonist in the 2003 Cartoon Network animated series Teen Titans.

She is voiced by Lauren Tom (best known for voicing Councillor Chang in American Dragon: Jake Long and Amy Wong in Futurama) in every appearance but her last, for which Tara Strong (who also voices Raven, Princess Clara, Toot Braunstein, Ferra, Lena Dupree and Harley Quinn in both the Batman: Arkham and Injustice: Gods Among Us videogames), provided the voice.

Jinx has light gray skin, sharing the skin color as Raven, Argent and Kyd Wykkyd. Her hair is shaped like a horseshoe, sticking out just a little bit at the tips. Her hair color is light pink, with metallic black bands near the top. Her eyes match her hair color, with pupils shaped like a cat's. She also has small, oval-shaped pink cheek blushes. Her outfit is a black, long-sleeved dress with violet centered bands. The bottom of her dress is cut jagged about halfway down her thigh. She also has violet and black striped leggings under her dress. Her shoes are black platform boots with violet soles. She also has a black collar with a violet charm on it.

During her time with the H.I.V.E. Five, Jinx is a very ambitious go-getter with a slight mean streak. Because of her goals to rise among the ranks of villains, she tries her best to be an effective H.I.V.E. member under both its regimes. Far more controlled, focused and mature than her male teammates, Jinx has proven herself to be a largely capable and determined, if not subconsciously insecure, leader.

Jinx is also strong in her own personality, though, even directly assaulting Madame Rouge and releasing Kid Flash when Rouge taunted and mocked her, deeming her a "pathetic failure" and an "embarrassment".

At first, Jinx appears to be quiet, mean, mysterious, often speaking in whispers and sometimes depicted as rather crazy because of the evil, crooked grin she usually wore when battling. However, in "Lightspeed", we see a more determined, outspoken and emotional side of Jinx who wants to be respected and not shunned because of her bad-luck powers. Kid Flash helped Jinx bring out her true personality, and how she feels about certain things.

Generally, however, despite her habitual dark looks, she is a very fashion-conscious girl, more intent on hunting for interesting attires and accessories rather than getting rich.

Furthermore, she is characterized as the "popular girl" in the H.I.V.E. Five; in the series, a number of super-teens — including Kid Flash, Cyborg, See-More and Kid Kold - are revealed to have (or had) a crush on her.

Jinx was a young magic user and a member of the H.I.V.E. Academy. She often worked alongside her fellow cadets, Gizmo and Mammoth. As part of the Academy's final exam, Jinx and the others were assigned to destroy the Teen Titans on orders by Slade. During their initial encounter with the Titans, Jinx focused her attention on her analog in the Titans - Raven. Their first battle ended with her victorious, and after defeating the Titans, they took command of their headquarters Titans Tower. Jinx temporarily moved into the quarters normally occupied by Raven. When the Titans regrouped, they fought to take back the Tower and Beast Boy distracted Jinx, tricking her into firing random blasts of energy that caused the roof above her to collapse. Jinx survived the incident, however, and soon regrouped with the rest of the H.I.V.E. Five.

In a later adventure, the H.I.V.E. Five once again encountered the Teen Titans while in the midst of a daring bank robbery. The H.I.V.E. Five managed to escape capture, but not before Robin planted a homing beacon on Jinx's costume. The Titans used the beacon to discover the location of the H.I.V.E. Academy and Cyborg infiltrated the organization using the alias "Stone". As Stone, he befriended Jinx and the others, but did not fool the H.I.V.E.'s new headmaster Brother Blood. Although Cyborg's true identity soon became known to the group, his presence made Jinx begin to question her commitment towards being a super-villain.

Sometime later, Jinx and the others were in the midst of robbing a museum when they encountered Kid Flash, who easily took the stolen items from them whilst giving Jinx a rose. By this point, Jinx felt that her reputation amongst the H.I.V.E. Five was tarnished, and she wanted to prove that she had what it took to play in the big leagues. To accomplish this, she attempted to cultivate a relationship with Madame Rouge of the Brotherhood of Evil. She encountered Kid Flash once again, and managed to capture him on behalf of the Brotherhood. While imprisoned, the speedster asked Jinx why she insisted on hanging out with "losers" like the H.I.V.E. Five. This angered Jinx greatly, but something in Kid Flash's words struck a chord within her. Nevertheless, she believed that the capture of Kid Flash assured her a place within the Brotherhood. Kid Flash soon escaped confinement, but Jinx caught up with him and managed to lay him low with an electro-stunner. Madame Rouge, however, was unimpressed with Jinx's handiwork and rebuked her efforts, calling her "pathetic". Jinx soon turned against Madame Rouge and, following a brief battle, began to distance herself from the rest of the H.I.V.E. Five.

Kid Flash's persistent efforts to reform her finally paid off, as Jinx eventually abandoned the H.I.V.E. Five altogether and joined the Titans in their battle against the Brotherhood of Evil. She no longer actively participates in criminal endeavors, instead aiding the Teen Titans in their various adventures. 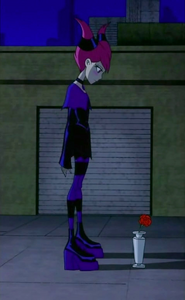 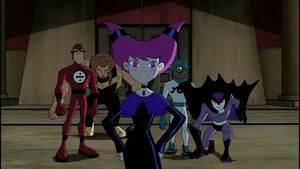 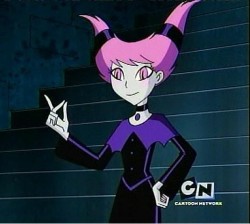 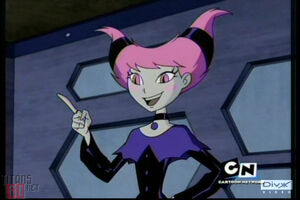 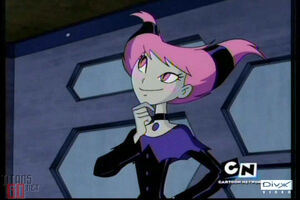 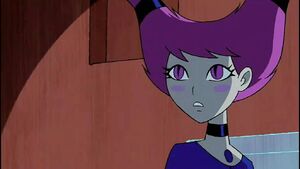