Fire Emblem: Shadow Dragon and the Blade of Light

Jiol is depicted as an elderly man with a beard and almost M-shaped eyebrows. He wears a black coat with matching cape, pants and boots. Jiol also wields a sword, which he keeps attached to his belt.

Jiol is a cowardly ruler primarily motivated by self-interest. When he believes he has the upper-hand in a situation, Jiol is an efficient commander with a bloodthirsty streak. When not in control, Jiol quickly breaks down in anger or panic.

In the beginning of the War of Shadows, while Altea's forces assisted Gra with repelling an invasion by Grust, Gharnef persuaded Jiol to betray Altea for the Dolhr Empire. The resulting attack by Gra's soldiers claimed many lives including that of King Cornelius, Marth's father. Afterwords, Gra and Grust launched a joint attack on Castle Altea, Jiol himself leading a squad of knights to hunt down Marth. They encounterd Marth and a small retinue just outside the castle, and prepared to kill the prince. However, the Altean knight and cavalier Frey disguised himself as Marth and and rode South, successfully leading the knights away from the real Marth. Jiol quickly discoverd the ruse and angrily demanded Frey's painful death; in the ensuing fight Frey sustained severe wounds and lost his memory, but survived.

Years later, the Archanean League, commanded by Marth, marched on Gra to both avenge Altea and recover the sword Falchion, one of the few weapons capable of killing Dolhr's leader, the Earth Dragon Medeus. Aware of the League's approach, Jiol requested reinforcements from Dolhr. To his dismay, the extent of Dolhr's support was to send the Whitewing sisters Palla and Catria to assist him. The League easily stormed Gra Bastion and killed Jiol; he was succeeded by Sheena.

Jiol's portrait in Fire Emblem: Shadow Dragon and the Blade of Light..

Jiol's portrait in Fire Emblem: Mystery of the Emblem. 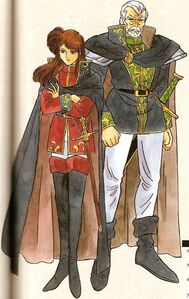 Official artwork of Jiol and Sheena from Fire Emblem The Complete. 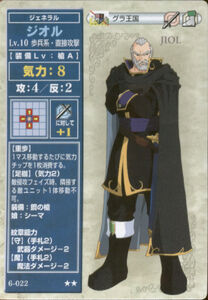 A card of Jiol from Fire Emblem: Trading Card Game.
Add a photo to this gallery

Retrieved from "https://villains.fandom.com/wiki/Jiol?oldid=4018221"
Community content is available under CC-BY-SA unless otherwise noted.