Joan is the secondary antagonist in the 2018 horror film Hereditary. She, along with her best friend Ellen Taper-Leigh, is a member of a cult that worships the demon King Paimon.

She was portrayed by Ann Dowd, who also played Ramona Norville in Big Driver and Aunt Lydia in The Handmaid's Tale.

The film revolves around an isolated family known as the Grahams. At a funeral for her deceased mother Ellen, Annie denotes that there were several people present at her mothers' funeral that she didn't recognize. During her time at a support group, Annie reveals that she and her family had a long history of mental illnesses. One day, Annie forces her son Peter to take his young sister Charlie to a party to socialize. He begrudgingly takes her along, and she accidentally eats some cake that had nuts in it. As a result, her allergies flair up, causing Peter to attempt to race to the hospital for assistance. Charlie sticks her head out of the window grasping for air. The carcass of a dead deer abruptly appears in the road, causing Peter to swerve; without warning, Charlie collides with a metal telephone phone, which decapitates her instantly.

Grief stricken, Annie meets Joan at her support group and Joan suggests that she perform a séance to communicate with her deceased daughter, claiming that she engages in them in order to speak with her deceased son. The séance appears to work, but it also causes more supernatural events to befall the family. The alleged spirit of Charlie takes possession of Annie, but she is able to awaken from it. Suspecting that her daughter's soul had become corrupted, Annie goes to Joan's apartment for advice only to see it vacant. Whilst going through her late mother's belongings, Annie discovers a photograph of her mother and Joan, revealing that they had an extensive history with each other. In the book, she finds a highlighted page dedicated to a demon known as Paimon, who desires a vessel of a young man. She also discovers her mother's bloated corpse in the attic. Annie tries to urge her husband Steve to destroy Charlie's sketchbook, Steve concludes that she must be going insane. When Annie burns the sketchbook, however, Steve dies in a gruesome fashion. Annie is then compelled to self-decapitate herself. Peter attempts to flee in desperation by jumping out of the treehouse.

Peter's body floats back up towards the treehouse where cult members devoted to Paimon were now present in. Joan is present, revealing that she was the second-in-command for Ellen's cult and that she and the cult orchestrated all of the hauntings - including Charlie's death - as a means of summoning their dark god. It is therefore revealed that Joan had deceived Annie over having lost both her son and her grandson, given how how the spirit she conjured in their seance was in fact King Paimon, masquerading as a human spirit. 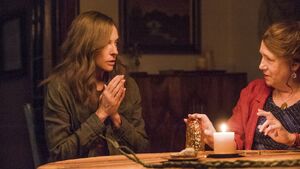 Joan with Annie.
Add a photo to this gallery 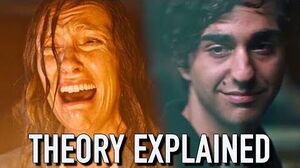 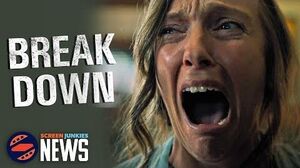 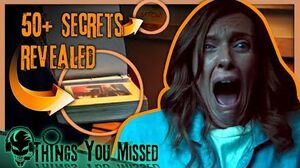 60 Things You Missed In Hereditary (2018)
Add a photo to this gallery
Retrieved from "https://villains.fandom.com/wiki/Joan_(Hereditary)?oldid=3901965"
Community content is available under CC-BY-SA unless otherwise noted.