Villains Wiki
Register
Don't have an account?
Sign In
Advertisement
in: Mature, Female, In Love,
and 23 more

Hanging out with Glenn Quagmire

Prevent Quagmire from divorcing her (succeeded)

Save Quagmire from Death (succeeded).

She was voiced by Nicole Sullivan, who also voiced Shego in Kim Possible, and appeared in the episode "I Take Thee Quagmire".

When Peter surprisingly won Wheel of Fortune, he won a week of free maid service. Joan was his maid, but did a variety of stupid stunts while being his maid.

When she meets Peter's friends, Quagmire falls in love with her and begins dating her, then later proposes to her.

They get married, and Quagmire decides to become more clean and stops his perverted ways. He changes his mind after he spots Lois Griffin's swollen boobs and tries to get out of his marriage. When he tells Joan that they should maybe get a divorce, Joan tells him that she'll cut herself and then Quagmire if that ever happens, so Quagmire tells her that it won't happen.

After realizing he married a psychopath, he decided to fake his death by making a video of him being attacked by a ninja (Joe), a Nazi (Cleveland), and a pots-and-pans robot (Peter), and finally a dinosaur that was actually a toy Peter was holding eats the body. Joan does not become convinced and the gang went with plan "B"; Quagmire coming in and faking a heart attack.

When Death arrives at his fake funeral to take his body away and Mayor Adam West covers the casket with concrete because of his fear of zombies, it is revealed to all the mourners that he's not really dead. When Death tells Quagmire he still has to take a body with him, Joan blocks Death and says "No! You can't take him!" She clutches Death's arm and falls to the floor, dead. Uncomfortably, Peter, Quagmire, Joe and Cleveland point out to Death the facts that she was suicidal and her name was Quagmire." and convinces him to take Joan instead. Death agrees. Quagmire asks him to leave the body for five more minutes. 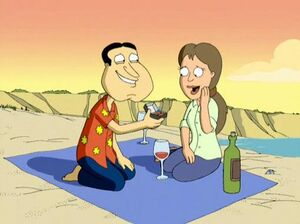 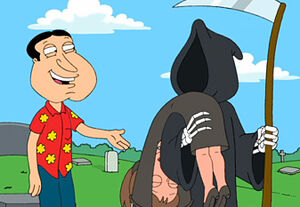 Quagmire with Joan and Death.