Eye of the Beholder

Kill as many men as she can (succeeded)

Evade the law
Live a long, happy marriage with Alexander Leonard (both failed)

Joanna Eris is the main antagonist of the 2000 crime film Eye of the Beholder. She's a con artist and cross-country serial killer of men, having a misandristic grudge against them from her past. She's found out by intelligence agent Stephen Wilson in one of her murders on an assignment he's on, but he stalks her instead of turns her in due to her resemblance to his estranged daughter.

She is portrayed by Ashley Judd in her first major villainess role.

Eris was abandoned by her father when they were both homeless, left to fend for herself and growing to pathologically believe men are selfish preservers and never caring about them in general. As she grew older, she became a serial killer of men, using various identities and ruses to lure them in enough before she murders them. Wilson, watching a socialite heir, Paul Hugo, as her latest victim to pick out, has her in his crosshairs when she murders Hugo with him as a hidden witness. she murders another man at Union Station, and instead of catching her and turning her, Wilson trails her and keeps from being caught or in danger, always hallucinating her as his daughter he lost to his wife in a custody battle. he witnesses her continue to commit more murders, all the while covering her up and watching out for police or other felonious characters, even more devoted when finding out about her past. But when she meets Alexander Leonard, a wealthy man with no sight, and eventually dates and then becomes engaged to marry him, Wilson grows sick and resentful of the idea, wanting her all to himself. As the two drive to the chapel to be wedded, Wilson snipes out one of their tires, killing Lenard from crashing the car. Eris grieves over the loss of her would-be man of her life before fleeing into the desert with Wilson on her tail.

A drug addict, Gary, sees Eris' car break down and drives her to a bar where they play darts and drink and talk. Wilson follows the two all the way to Gary's place, Eris attempted to target Gary as her next victim, but the tables are turned when Gary starts passing at her, and when she pushes him away, Gary beats her out cold and kills her unborn child, doping her with heroin so she won't fight back and Gary can rape her. Wilson barges in immediately to deliver his own beating at Gary, slamming Gary senseless and saving Eris, who mourns her baby's death when she wakes. She runs to Alaska and starts working as a waitress in a diner, and after having frequented the diner enough, Wilson asks her on a date. They drink, get sentimental, and she says where she hopes to be buried, but she changes to cold shoulder by saying she's not what Wilson wants and to leave her alone. Her psychologist, Jeanne Brault, and the police come and arrest her, but Wilson snatches her away and brings her to his trailer. She's horrified and feeling finding out he's been stalking her for years, so she takes his revolver and shoots at him. When she finds out it's only filled with blank bullets, she flees in a car and he chases her on a motorbike. She crashes into a frozen lake that breaks underneath the car, and although Wilson rescues her, she's in critical condition. She realize he's her "angel" as she dies in his arms. 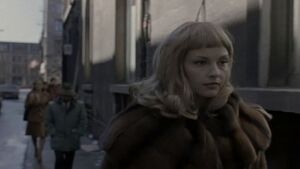 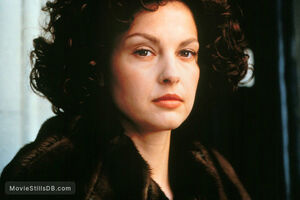 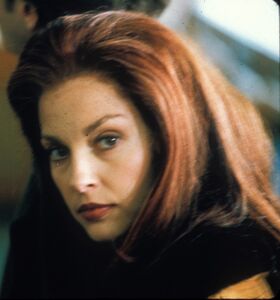 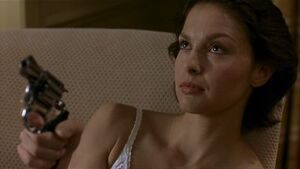 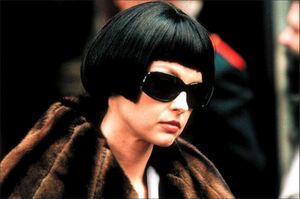 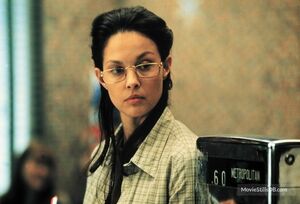 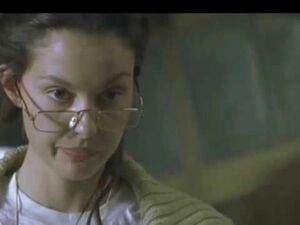 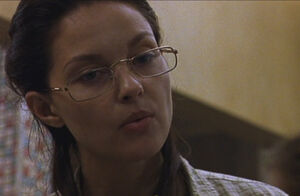 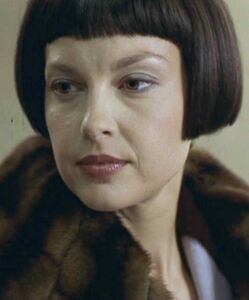 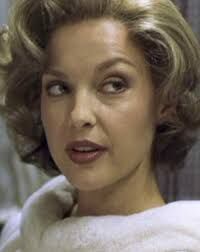 Add a photo to this gallery
Retrieved from "https://villains.fandom.com/wiki/Joanna_Eris?oldid=4216355"
Community content is available under CC-BY-SA unless otherwise noted.