The Rescuers Down Under

Joanna (also called Joanna the Goanna) is the secondary antagonist from Disney's 29th animated feature The Rescuers Down Under. She is Percival C. McLeach's former pet monitor lizard.

Her vocal sound effects were provided by Frank Welker, who also voiced her owner's singing voice in the same film and Mohawk in Gremlins 2: The New Batch, another film released in 1990.

Joanna is very similar to her owner: mean, scary, entertaining, and more intelligent than she's given credit for. She is very fond of eggs and enjoys messing with McLeach by swiping them. However, she is not as anthropomorphic as the other animals in the film.

Joanna is a lean and slender goanna, with green-blue skin on the back and gray-green on the lower part of the body, with very pointed teeth, penetrating red eyes with yellow irises and long curved claws on the legs.

The Rescuers Down Under

In the movie, when Cody gets caught in one of McLeach's traps, McLeach and Joanna show up thinking they've caught an animal, but when McLeach sees that it's Cody, he tries to blame it all on Joanna, saying that she's buried a big hole in the ground. While McLeach helps Cody out of the hole, Joanna spots a mouse in Cody's backpack and jumps on Cody and causes McLeach to fall in the hole.

When McLeach gets out of the hole, he furiously points his gun at Joanna, causing her to cower, but when he spots Marahute's feather in Cody's backpack, he congratulates Joanna on what she's done and tries to get Cody to tell him where Marahute is, but Cody rejects and runs off and Joanna chases him, trapping him at the edge of Crocodile Falls. When Cody tries to get out his pocket knife to defeat Joanna with, McLeach grabs him, and both he and Joanna kidnap the boy and take him to their abandoned opal mines home.

At the opal mines, Joanna takes a bath while McLeach ties Cody up and tries to get him to tell him where Marahute's nest is, but Cody refuses and McLeach angrily kicks his boiling pot on the fire, causing some of the ashes of the fire to fall in Joanna's bath and causing Joanna to look up at her master nervously. McLeach puts Cody in a cage along with some other animals to think about telling him where Marahute is, and he orders Joanna to listen if there's any disturbance from the animals or Cody.

When Cody and the animals try to get the keys to escape, Joanna comes back and takes the keys away, and she puts them up on the hook so Cody and the animals can't escape. The next day when McLeach goes to get some eggs for his breakfast, Joanna secretly follows him and she secretly eats all his eggs, causing McLeach to get angry, but just as McLeach is about to hit Joanna with the egg box, he figures out that Marahute's eggs are Cody's weak spot.

Then Joanna hears more noise from the animal prison room and learns that one of the animals named Frank the lizard has managed to get the keys, and she starts chasing Frank who manages to throw the keys to Cody and jumps on McLeach's gun, causing the gun to go off and push Joanna into a box nearby. But just as Cody is about to free the other animals, McLeach comes and both he and Joanna take the boy outside, and McLeach lies to Cody saying that Marahute has been shot by another poacher and orders Cody to leave.

As Cody leaves, McLeach and Joanna secretly follow him in McLeach's truck but to their unknown Bernard, Bianca, and Jake hop onto the truck and go with the villains to follow Cody. At the nest McLeach manages to capture both Marahute, Cody, Jake, and Bianca in the cage in the back of his truck and orders Joanna to eat Marahute's eggs so the eagle will stay rare. When Joanna sees the eggs, she tries to eat them, but they won't go into her mouth and feel hard, so she knocks them off the cliff with her long tail, thinking they've cracked, and returns to McLeach, but it's revealed that those were actually rocks and Bernard, who wasn't captured by McLeach, managed to hide Marahute's real eggs from Joanna.

McLeach drives his truck to Crocodile Falls and ties Cody up to the crane, and prepares to feed the boy to the crocodiles, but the engine goes dead and a razorback jumps out of the truck, and McLeach orders Joanna to sniff around for suspicion. Joanna finds Bernard and she chases him and jumps on McLeach, and Bernard manages to push them both into the water. Joanna manages to survive by swimming onto a rock before the current gets too strong, and she waves goodbye to McLeach just before he goes over the waterfall to his death. It is unknown what happened to her, but she presumably redeemed herself and went on to live in the wild in her natural habitat.

Joanna only appeared alongside McLeach in "House of Crime" as both Joanna and McLeach were arguing with Stromboli from Pinocchio. 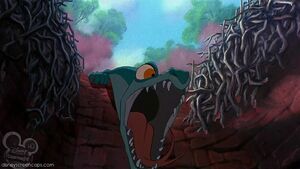 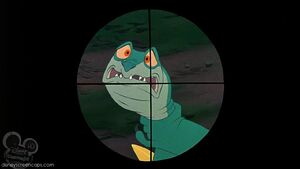 Joanna almost gets shot by McLeach. 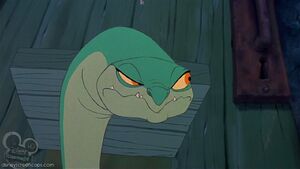 Joanna in the prison room. 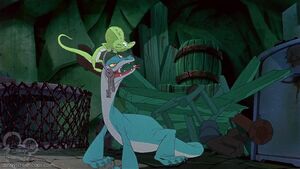 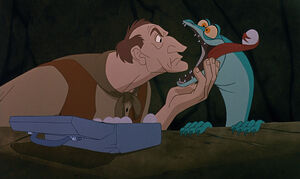 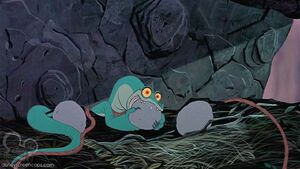 Joanna eating eggs, not knowing that they are actually rocks. 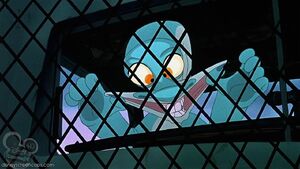 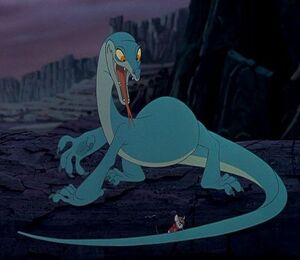 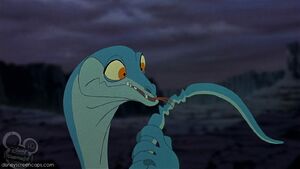 Joanna holding her tail after accidentally biting it. 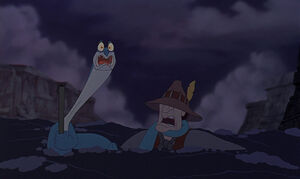 Joanna waving goodbye to McLeach just before he falls to his death over the waterfall. 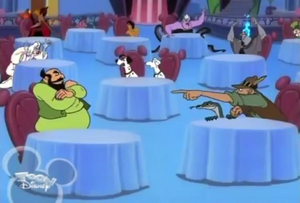 McLeach and Joanna's cameo in House of Mouse, arguing with Stromboli. 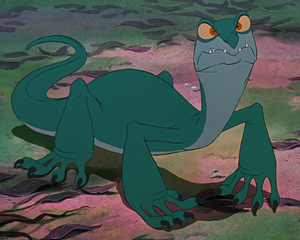 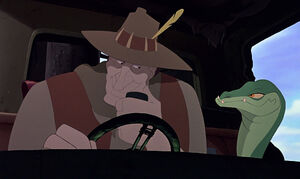 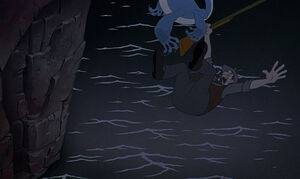 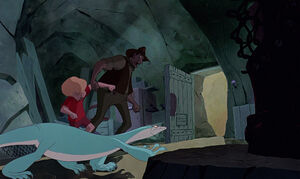 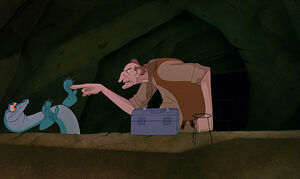 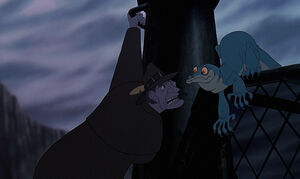 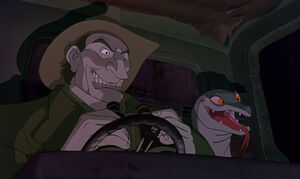