Joanne Bayswater (also known as the Iconoclast) is the 2nd elusive target of Hitman 3. She is a sociopathic hitwoman starting her own assassination agency.

Little is known about Joanne Bayswater's past. was born in Sutton, England,in a middle class family and was sent to a boarding school at seven. She excelled in school and studied language at Cambridge. She started working for an unidentified assassination agency, but the collateral damage she caused prompted her handler to protest to the board of directors. Offended, she went rogue from the organisation.

In the present, Bayswater started her own organization and attended a gala in Mendoza, Argentina to find clients. There she was assassinated by Agent 47.

Bayswater is shown to be a cruel, uncaring woman, willing to take on any contract for the right price and even reminiscing on her murders. She is also cautious, checking to see if her food is poisoned and scolding her bodyguard for taking a break. 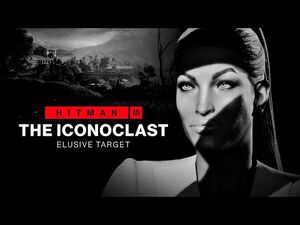