Kill Gus, Jesse and Mike to avenge the cartel. (failed)

Joaquin Salamanca was an enforcer for the Juárez Cartel, the grandson of Don Hector "Tio" Salamanca and relative of Tuco Salamanca, Marco Salamanca, and Leonel Salamanca.

Despite appearing only in one episode, he proved to be very loyal to the cartel. Also, as seen in Salud, he was able to demonstrate no scruples in murdering anyone who interferes with cartel affairs, even innocent as his murderer. He served as a minor antagonist in Season 4.

He was portrayed by Gabriel Nunez.

After the violent deaths of several of his family members, only Joaquin and his retired grandfather "Tio" remained to carry the Salamanca name. Joaquin worked directly for the cartel boss Don Eladio Vuente as an enforcer alongside Gaff in Mexico. He was present at Don Eladio's estate when the American meth distributor Gustavo Fring (with Mike Ehrmantraut and Jesse Pinkman) was invited to celebrate their partnership. Joaquin and Gaff escorted a blindfolded Gus, Mike, and Jesse to meet withBenicio Fuentes in the cartel's superlab. He stood by while Jesse cooked a batch of Blue Sky meth and observed the process.

Later, while Joaquin was posted elsewhere on the property, Gus succeeded in lethally poisoning Don Eladio, his nine capos, Fuentes, and his bodyguard Miguel; Gaff was garroted nearby by Mike. As the servants and concubines stuffed their pockets and fled the compound, Joaquin surprised the fleeing Mike and Jesse (who were carrying an unconscious Gus to a getaway car) and shot Mike in the gut. Jesse returned fire, shooting rapidly, and hit Joaquin in the leg before shooting him several more times in the chest. 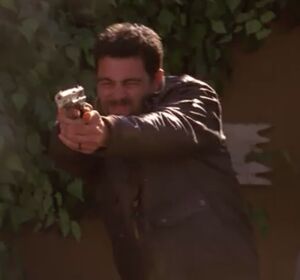 Joaquin's last moments before being killed by Jesse.
Add a photo to this gallery

Retrieved from "https://villains.fandom.com/wiki/Joaquin_Salamanca?oldid=3690605"
Community content is available under CC-BY-SA unless otherwise noted.