Reach an even higher standing than he already has as the eldest son of a wealthy family.

Jobin Higashikata is one of the two main antagonists (alongside Satoru Akefu) of the 8th part of JoJo's Bizzare Adventure, JoJolion

Not much is known about Jobin's early life. At age 12, he received the rock disease that plagues the firstborn of each Higashikata generation and causing his short term memory loss. due this he was frequently bullied by two classmates who forced him to wear his mother's underwear, one of students reported to police about Jobin's suffering hands by his classmates. that night one of bullies dragged Jobin to the house which his savor lived them and tried to force him to set fire on the denouncer's house, but Jobin refused to commit arson which infurted the bully thearthed burn Jobin's face, that the moment Jobin awakened his Stand Speed King and killed the bully by inside on head and his mother cured it using unknown means.

Every Day is a Summer Vacation

In 2011, some time around August 19, Jobin briefly meets Josuke who is coming to live with his family before leaving on a trip to Vietnam and the Philippines. He eventually returns and gifts Josuke a stag beetle. Josuke challenges Jobin to three stag beetle fights. Josuke wins the final fight and in return gets the keys to Jobin's golden Lamborghini Gallardo.

Jobin enlists the help of Dolomite to attack Josuke. Jobin then helps himself by using his stand, Speed King, to knock out Yasuho Hirose, who is helping Josuke.

Jobin is very childish. He plays with toys and obsessively collects stag beetles, but he also is a fan of the poet, Aida Mitsuo and has a philosophy that whatever standing in life one starts at, that is "zero" for them and everyone seeks to raise their position regardless of where their "zero" is.

Jobin's stand is called Speed King. It can raise the temperature of anything it touches by a few degrees Celsius, though it is believed that this is only a fraction of its true potential. 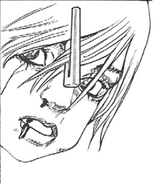 Jobin as a sickly child. 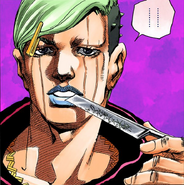 Jobin shaves his eyebrows without hesitating. 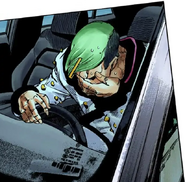 Jobin upon the realization of Damo's death.

Jobin and his Stand after knocking Yasuho out. 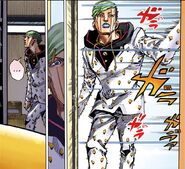 Retrieved from "https://villains.fandom.com/wiki/Jobin_Higashikata?oldid=3488914"
Community content is available under CC-BY-SA unless otherwise noted.