Everything Everywhere All at Once

Jobu Tupaki, better known as Joy Wang, is the main antagonist of the 2022 science fiction movie Everything Everywhere All at Once.

She was played by Stephanie Hsu.

When the Alpha Evelyn and Waymond studied verse-jumping, the Joy of that universe - along with many other young minds - were sent to practice. However, Joy had the most potential; and so Alpha Evelyn pushed Alpha Joy to her limits until her mind overloaded. Instead of dying, her mind was fractured into every possibility, having her experience everything at once. This led her to have a nihilistic belief that nothing mattered, henceforth transforming into Jobu Tupaki as a result.

Jobu is introduced as a "great evil" that threatens the existence of the multiverse. Jobu is first seen looking for the protagonist Evelyn, in a universe where she is seen as a deity. She overloads the mind of that universe's Evelyn, accidentally killing her. She then detects the protagonist Evelyn, travelling to her universe, going straight to the IRS building she is in. After some time, she meets with Evelyn, and easily wipes out the guards in her way, confronting Evelyn face to face. She shows her the everything bagel that she made by putting everything she could think of on a singular bagel, that collapsed on itself. She shows her beliefs to Evelyn in a speech before being intercepted by the alpha Gong Gong and Waymond, and they lock all of them in a room away from Jobu. After an attempt to catch up, Joy enters the room and is immediately taped to a chair, while Jobu remains absent. Alpha Gong Gong's solution is to kill Joy before she can return as Jobu to heavily hinder her goal, but Evelyn resists, helping Waymond release Joy from her chair. Jobu pursued the Alpha Wang family and their group, crashs their van, and kills all of them. Jobu returns to the protagonist Evelyn, who decides to become like Jobu to defeat her. However, Evelyn overloads her mind and temporarily dies.

In another universe, Evelyn is greeted by Joy with her girlfriend, Becky. Jobu reveals herself, leads Evelyn to their living room to confront her again. She then transports herself and Evelyn to the temple containing her bagel. She turns back the curtains to reveal the bagel and that she just wants to see if she can die, and Evelyn travels to many universes at the same time, who has also gotten Jobu's nihilistic beliefs. Evelyn then meets with Jobu as two rocks in a universe where life didn't survive. Jobu says that she feels trapped in her fate, and hoped that Evelyn would see something different. This is when the Waymond of every universe does something that makes Evelyn see that there are things worth living for before Jobu interupts, and says that it doesn't matter. She then activates the everything bagel, and leaves Evelyn behind to enter the bagel, effectively dying. However, Evelyn travels up the stairs, making everyone in her way feel something good to get to Jobu. When Evelyn reaches her, they get into a fight where Jobu pushes her belief that the bagel is the only way to peace, when Evelyn hugs Jobu to pull her back. They meet in the parking lot of the laundromat where Evelyn first arrived in the universe. Jobu convinces Evelyn to let her go, which she does, allowing herself to be consumed into the bagel. However, Evelyn changes her mind, and convinces Jobu to come back and not leave. Moved by Evelyn's speech, she goes back on the bagel, hugging Evelyn back. They embrace themselves in their arms.

The Wang family is reunited and everyone accepts Becky into the family. The Wangs go to the IRS to discuss the laundromat, where things are looking hopeful. 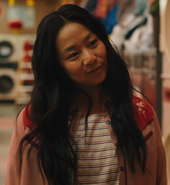