Create a children cult which is devoted to her (partially succeeded).

Jocelyn is the main antagonist from the season 9 episode "Scars" of The Walking Dead. She was Michonne's friend from college, and is the secret leader of a cult of orphaned and kidnapped children she trained and brainwashed to do her bidding.

She was portrayed by Rutina Wesley.

Almost nothing is known about her, except she and Michonne attended college together, and have helped each other through many painful experiences.

Sometime after the outbreak, Jocelyn seemed to care for children (presumably orphaned or kidnapped) and formed a cult in which she manipulated and trained them to be hardened killers and survivalists. She taught them how to use weapons, kill walkers, and mutilate other survivors to prove their strength. She also had the children used as bait to infiltrate other communities so she can kidnap more children and raid supplies.

From a flashback, Jocelyn, Mitchell, and Winnie were discovered by a group from Alexandria. Michonne immediately recognized Jocelyn as a friend from college and decides to let her group stay.

After being accepted, Jocelyn runs from the infirmary panicking and telling Michonne she has to go back to "them". Michonne calms her down and offers help. Later, Michonne and a group follow Winnie to a factory where they find several kids hiding out and bring them to Alexandria.

At night, Jocelyn's kid group is enjoying a bonfire with the community kids. Michonne was impressed with the kids' survival skills, with Jocelyn telling her that kids are capable of anything. After the bonfire, Jocelyn and her cult kidnap a preschool aged Judith Grimes and several other children, kill a resident witnessing the kidnapping, and leave with their food supply and guns.

The next morning, Michonne and Daryl find one of Jocelyn's kids near an abandoned school. They chase him until they get encountered by the rest of her children. Daryl gets shot in the shoulder with an arrow, while one of the children, Linus, knocks out Michonne.

Both wake up bloodied and tied up to a pipe. Linus painfully brands Daryl with an X, while Jocelyn tells Michonne that children cannot be soft. Winnie then brands Michonne as she shrieks in pain. Eventually, they escape and split up. Michonne encounters Jocelyn and demands to tell her where Judith and the rest of the kids are. As they argue, Gina points Michonne's own katana right at her. While leaving, Jocelyn tells Gina and Linus to kill Michonne. Armed with only a pipe, Michonne says that she does not want to kill them. Linus slices a big cut on Michonne's stomach, who was pregnant with R.J. at the time. Finding no choice but to resort to violence, Michonne knocks out both Gina and Linus and grabs her katana.

When Michonne finds an exit, Jocelyn tries to kill her by beating her over and over with a plank. Michonne finds the strength to stab her in the leg and the chest, killing her. Even after her death, Jocelyn's children remain loyal, and Mitchell commands them to kill the Alexandrian kids. Michonne kills Mitchell, and tells the kids that they do not need to follow these orders anymore. When the children were not relenting at all, Michonne was forced to kill all of the children, one by one, until Winnie remains. With Jocelyn and her child cult dead and Winnie running away, Judith emerges from the trailer she was kept in and happily embraces her mom. 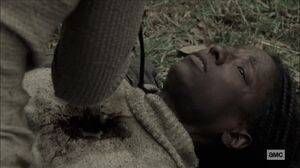