To start World War Three and turn Earth into fuel to sell.

Jocrassa Fel-Fotch Passameer-Day Slitheen is a member of the Slitheen a criminal family from Raxacoricofallapatorius, the commander of the Passameer-Day branch of the family and the main antagonist of the Doctor Who episodes Aliens of London and World War Three.

As Joseph Green, he is played by David Verrey who also voices his Slitheen form which is played by Paul Kasey.

Not much is known about Jocrassa's early life, though what is known is that like the other members of his family, he was banished from his home planet of Raxacoricofallapatorius for criminal activity, with the threat of a death sentence should the Slitheen return to the planet.

Sometime in 2006, Jocrassa along with several other members of his family came to Earth and infiltrated the British government and killed and disguised themselves as many members of parliament with Jocrassa disguising himself as a politician named Joseph Green and became Acting Prime Minister as the Slitheen had secretly killed the Prime Minister. He planned to start World War Three which would turn Earth into a radioactive wasteland and then the Slitheen would sell it as cheap starship fuel as part of the family business. Whilst posing as Green, Jocrassa was confronted by General Asquith who was disappointed by his poor leadership and tried to relieve him of command under the Emergency Protocols only for Jocrassa, his sister Blon (who was disguised as Margaret Blaine) and their brother disguised as Oliver Charles to kill him and his body is then used as a disguise by the latter Slitheen in order to take control of the British military.

Later a group of alien experts along with The Ninth Doctor came to 10 Downing Street following an faked crash of the Slitheen's ship before the Slitheen disguised as Asquith reveals his true form to them and then Jocrassa electrocutes them using their ID badges resulting in all the experts except the Doctor being killed. The Doctor tries to warn the police that the Acting Prime Minister was an alien but Jocrassa convinces them to think that the Doctor was responsible for the experts deaths and tells them to shoot the Doctor on sight and placed the upper floors on quarantine. Later Jocrassa tells Earth 's media that there was an alien mothership which deployed massive weapons of destruction above the United Kingdom and that Earth should prepare itself for war.

He then asks for launch codes for the UK's nuclear arsenal from the United Nations which he would use to destroy Earth. But before the codes could be given to the Slitheen, Mickey Smith, the boyfriend of the Doctor's companion Rose Tyler on the Doctor's orders, accesses the Royal Navy's systems and launches a Harpoon missile at Downing Street which kills Jocrassa along with the other Slitheen (Except Blon who as revealed in a later episode Boom Town was able to teleport away before the missile hit). 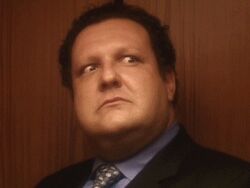 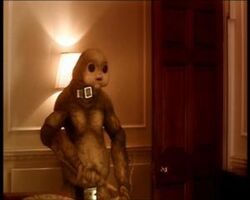 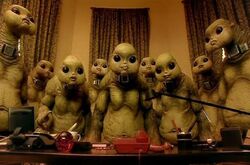 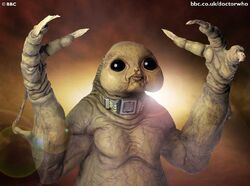 "Get My Best Side!"
Add a photo to this gallery
Retrieved from "https://villains.fandom.com/wiki/Jocrassa_Fel-Fotch_Passameer-Day_Slitheen?oldid=3327085"
Community content is available under CC-BY-SA unless otherwise noted.