Providing meals for The Secret Order of the Midnight Well

Joe is a minor antagonist in Popeye the Sailor Man, only appearing in the episode "Pop-Pie a la Mode". He is the leader of The Secret Order of the Midnight Well cannibal tribe as well as the owner of the Joe's Always Inn hotel, who lures customers into its hotel with its nice atmosphere and excellent service only to eat them later.

He is voiced by Jack Mercer, who also voices Popeye.

In "Pop-Pie a la Mode", Popeye was lost in the Pacific Ocean and needed a place to stay so that he wouldn't burn in the heat of the sun. Luckily, he found not only land, but land with a classy hotel on it called "Joe's Always Inn". When he got there, Joe saw him and immediately took a liking to him, visualizing him as a plate of meat. Joe came to the front desk and politely introduced himself, almost immediately winning Popeye over with his utmost kindness and friendly demeanor. Joe decreed his bellboys to take good care of Popeye, as he was, in his own equivocal words, "the specialty of the house". While Popeye was being treated like a king, Joe read up on how to cook a human being to perfection. Popeye rested and relaxed in a hammock on the beach, while the other cannibals fed him tons of delicious, yet very fattening junk foods, hoping to beef him up into a square meal of their own. Joe noticed a baby cannibal trying to eat Popeye's leg, sandwiched between two slices of bread, and stopped him, scolding him for eating between meals. When Popeye was just about plumped to prime, Joe told Popeye that he was in for a special treat. He was going to initiate him into The Secret Order of The Midnight Well, which is the name of their cannibal tribe. Thinking this "initiation to their secret order" was just some kind of a fun promotional gimmick, Popeye obliged. That night, the Midnight Well played in a drum circle surrounding a hot tub, which Popeye was pushed to get into. Popeye got in and soaked in the tub, only for two cannibals to take the decorative sides away and reveal it to actually be a cauldron. Popeye started to heat up in the tub and felt a little uncomfortable. Just then, the baby cannibal sunk it's developing tooth into his arm and with that jolt of pain, Popeye realized he had just been suckered into becoming a great buffet for a tribe of hungry, barbaric, bloodthirsty cannibals. As the cannibals quickly approached him, Popeye punched them all away but the cannibals soon took over and tied him up in ropes and then flattened him into a pancake with mallets before Popeye is tossed up and down on a giant frying pan. However, Popeye was able to pop out a can of spinach and then eat it, giving him the power to fight back. Popeye beat down every single one of the tribesmen and saved big chief Joe for last. Popeye gave Joe a good sock, catapulting him into his hotel. Joe activated a bunch of cannons which he fired at Popeye but Popeye caught them all and tossed them right back, blowing up the hotel and once again, sending Joe crashing into the ocean, where he was ironically attacked by man-eating sharks. After overthrowing Joe as the leader of The Secret Order of the Midnight Well, Popeye crowned himself as the new kind and the remaining tribesmen began worshiping him.

Joe, along with the rest of the tribe made a reappearance, via stock footage in the flashback episode "Spinach vs. Hamburgers", where Popeye referred back to the events of said episode, trying to convince his nephews that spinach can save their lives, much like how it did back then. A clip of the episode from the climax to the ending was shown. The nephews were still not convinced, however.

Joe is a blackface caricature of an Afro-Caribbean adult man. He is a shiny, brown-skinned man with a big fat belly and strong muscles. He has a black animalistic nose and big light-skinned lips. Joe wears a black top hat with a white bone going through it, white Mickey Mouse gloves, red board shorts, and a yellow vest.

Joe is a primitive and barbaric, yet simultaneously charming and charismatic cannibal, who has a method of gaining the trust of his victims with his kindness and friendly demeanor so that he can lure them into his traps and later eat them alive. 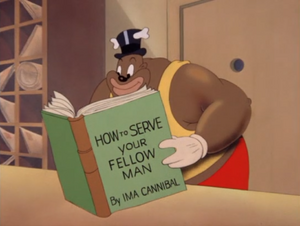 Joe reads about how to prepare and eat a human. 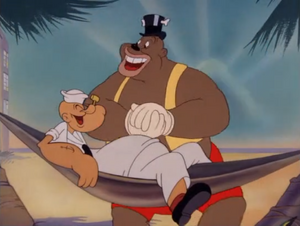 Joe being a faux affably evil to Popeye. 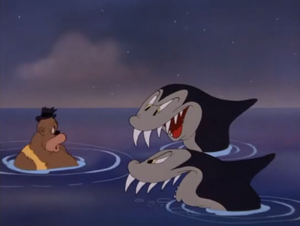 Joe getting an ironic dose of karma.