Leader of the Claimers

Disciplining liars in his group.

Hunt down and kill Rick Grimes as revenge for killing his fellow group member (failed).

Joe is the final antagonist of Season 4 in AMC's The Walking Dead. He served as the main antagonist of the second half of Season 4. He is a survivor of the zombie apocalypse and is the leader of a group known as the Claimers.

He was portrayed by Jeff Kober who also played Patrick Channing (also known as the Pentagram Killer) in The First Power, and Eugene Hoff in Law & Order: Special Victims Unit.

Nothing is known about Joe's life before or as the outbreak began. He may have been part of a motorcycle club, judging by his apparel. He may have also been an outdoorsman, judging by his interest in crossbows and respect he has for those who use them. He also mentions at one point that he has liked cats since age three, and believes "there ain't nothing sadder than an outdoor cat thinking he's an indoor cat".

Joe makes his first appearance as one of the men who return to the house Rick, Carl and Michonne are staying in. He is first heard off-screen disciplining one of his own for being a coward. He is later physically seen when he comes upstairs and bounces a tennis ball in the back room where Rick is hiding. After Rick sneaks outside, Joe sits on the porch eating a can of fruit and whistling. With Michonne and Carl returning from their supply run, unaware of the situation, Rick readies himself for battle...unnecessarily, as Joe quickly goes back inside to dispatch a walker, giving Rick the time he needed to escape.

Joe is first seen with his group gathering around Daryl, while Daryl is sitting down in the middle of a road. Joe approaches Daryl, but Daryl quickly rises up and punches Joe in the face, which bloodies his nose and knocks him down. Daryl then points his ready-to-fire crossbow at Joe's face, but Joe just gets back on his feet, laughs, and says he is pleased to see that Daryl is a "bow man". Joe then remarks some more on his admiration of Daryl's crossbow, including the range and force of its projectiles. Meanwhile, the other group members all point their weapons at Daryl, as Joe talks to Daryl. Joe then warns Daryl that if he kills him, the other group members will quickly kill Daryl in retaliation. After Joe talks Daryl into lowering his crossbow, the other group members then lower their weapons too.

Joe later breaks up a potential fight between Daryl and Len and explains to Daryl that if you "claim" something its yours. Joe also tells Daryl that any rule breakers will be punished by beatings and or worse. Joe splits the rabbit by cutting it in half, giving the upper body to Len and the lower body to Daryl. Later in the episode Len frames Daryl for stealing his half of the rabbit but Daryl denies that he stole it. Joe empties Daryl's bag and Len's half of the rabbit falls out. Joe asks Daryl if he stole the rabbit and again Daryl denies. Joe then asks Len if he framed Daryl and Len says no. Joe then punches Len and tells Daryl that he saw Len put it in Daryl's bag. Joe then gives orders to the rest of the men to beat him up. While on the railroad tracks, Daryl finds the Terminus signs and asks Joe if they have come across the signs before. Joe says that there is no sanctuary for them since people like Joe's group (and Daryl) would without a doubt not be welcomed with open arms. Joe then tells Daryl that his group has been tracking down a "walking piece of fecal matter" (Rick) who was hiding out in a house they marauded, killed one of their men (Lou) and left him to turn. Joe says that he has seen the Terminus signs, and the group has used it as an end point for where Rick may have gone. Initially, Daryl was unaware that the man that Joe and his group are after is Rick.

Joe and his group ambush Rick, Michonne, and Carl. Joe is about to kill Rick, counting down from 10. As he gets to 8, Daryl emerges from the woods and tells Joe to stop. Joe demands an explanation, and Daryl says that Rick is a good person. Joe, saying that Rick killed their friend and isn't a good person, calls Daryl a lair, then proceeds to order two of his men to kill Daryl by beating him to death. One of Joe's group members, Dan, grapples Carl to the ground and attempts to pull off his pants, intent on raping him. Rick gets mad and demands Joe that he leaves Carl alone. After Joe ignores Ricks request, Rick head butts Joe from behind and causes Joe to shoot his gun in reflex (and missing). The gunshot temporarily stuns Rick due to the gun being shot close to his ear. Rick then punches Joe in the face, but Joe quickly counter punches Rick and knocks Rick to the ground. Joe grabs Rick and locks him tightly. Joe taunts Rick, asking "The hell are you gonna do now, sport?" Suddenly, Rick lunges forward and bites a chunk out of Joe's neck, and then pushes him to the ground. Joe then eventually dies of either bleeding out, or not being able to breath. After his death, his group fell apart and were killed by Rick, Michonne, and Daryl. 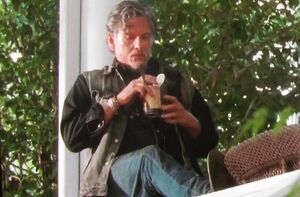 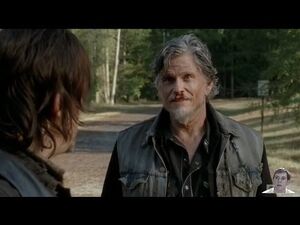