Joseph Chillton, also known as Joe Chill or just Joe, is one of the overarching antagonists of the Batman franchise.

He was a petty thug who was responsible for killing Bruce Wayne's parents, Thomas and Martha, resulting in him dedicating his life to waging war on crime and becoming the vigilante Batman. In numerous different incarnations, Chill would later encounter Bruce Wayne/Batman again during his crime-fighting career, often learning his secret identity and realizing his role in his creation.

Not much is known about Chill except that he is, in most versions of Batman, a petty mugger who kills Bruce's parents Thomas and Martha while trying to take their money and jewelry after the Wayne family were walking home from seeing a movie by taking a shortcut in Crime Alley.

When he demands Martha's necklace, Thomas moves to protect his wife and Chill kills him; he then kills Martha when she screams for help.

In the Golden Age story that named Chill, the event was censored to Martha dying from a heart attack brought on from the shock of seeing her husband murdered. Chill panics and runs away when Bruce begins crying and calling for help, but not before the boy memorizes his features.

In at least three versions of the Batman mythos, the Waynes' killer is never identified.

In the Pre-Crisis era, Joe Chill was revealed to not just be a mugger but a hitman who was hired to kill the Waynes on Lew Moxon's orders. In the present, he has become a small-time crime boss and murdered at least one other man, a partner of his who squealed to the police.

Batman investigates Chill and eventually reveals his identity as Bruce Wayne, the son of the couple that Chill murdered. When Chill goes to his men for help, they angrily turn on him upon finding out he is behind the existence of the hated Batman and fire on him.

Batman incapacitates the criminals and rescues Chill. Mortally wounded by the gunshots, Chill admits it's fitting Bruce got him after all and expires from his injuries.

During the Post-Crisis era, Batman continues to watch Chill for many nights until he finally confronted him and provides Chill with the same gun he used to shoot the Waynes many years ago.

After realizing who Batman really is and that he was responsible for his creation, Chill proceeds to commit suicide knowing that the entire criminal underworld would want him dead if they ever found out.

In the New 52 continuity, Joe Chill is portrayed as an alcoholic bum who commits robberies for money to feed his addiction. Ten years after Chill killed the Waynes, Bruce Wayne confronts Joe Chill in his shabby apartment with a loaded handgun and demands to know why Chill killed his parents.

Chill admits that he didn't even know who the Waynes were when he held them up in the alley, and only wanted money to buy more alcohol.

Bruce is heartbroken and enraged to learn that his parents died for nothing and nearly kills Chill in cold blood, but stops himself at the last minute upon realizing that Thomas Wayne would not want his son to become a killer. The next day, Bruce leaves Gotham City to begin his training to become Batman.

In the original script for 1989's Batman, written by Tom Mankiewicz, crime boss Rupert Thorne hires Joe Chill to murder Thomas Wayne because he is running against Thorne for city council. Chill is not mentioned in the final version of the film which was directed by Tim Burton.

In the film, a young Jack Napier (who would later become The Joker) is the Waynes' killer. Rupert Thorne is changed to Carl Grissom and the mugger is unnamed.

Joe Chill mugged Thomas and Martha Wayne, and tore away her necklace. The Waynes were then shot and murdered by his partner, Jack Napier, although his reaction implied that he did not anticipate that Jack would actually kill them. Then Chill began to run away in order to escape from the scene of the crime, and urged Jack to follow him.

Chill appears in the live-action film Batman Begins as a minor yet pivotal antagonist. Like in the majority of Batman continuity, Chill is a small time criminal who, out of desperation because of extreme poverty.

(At the time, Gotham City was in the middle of an economic depression that was caused by the League of Shadows) mugs the Waynes outside of an opera house and subsequently kills both Thomas and Martha Wayne. He is immediately apprehended by the GCPD and is sent to jail, where he shares a cell with mob boss Carmine Falcone.

Fifteen years later, Chill cuts a deal with the GCPD, arranging for his release on parole in exchange for testifying against Falcone in court. Bruce Wayne has returned to Gotham to attend Chill's disciplinary hearing (which the presiding judge, paid off by Falcone, makes public in order to get Chill "in the open") to apparently speak on behalf of his parents.

During the hearing, Chill claims to regret his crime. Following the hearing, Bruce attempts to shoot Chill, but he is robbed of his chance for revenge when an assassin working for Falcone guns Chill down first.

After Bruce's revelation to his close friend Rachel Dawes that he wanted to kill Chill, Dawes slaps him and says that his father would have been ashamed of him. Feeling guilty, Bruce hurls the gun into the Gotham Bay and vows never to touch one ever again.

During Bruce's confrontation with Carmine Falcone, Falcone claims that when he and Chill were in jail together that Chill bragged that when he murdered the Waynes, Bruce's father "begged like a dog" for mercy.

This, of course, isn't true, as the audience can see that Thomas didn't begged for his life as a dog when Chill went to kill him and his wife in the scene where the Waynes are killed, though it's unknown if Chill actually said that, considering that he was desperate for the money and seemed to regret his actions (most likely, Falcone made up the story to provoke Bruce, knowing that it would hurt him).

As in most Batman continuity, Chill's murder of Thomas and Martha Wayne leads to Bruce's desire to fight injustice, which once again makes Chill indirectly responsible for Bruce becoming Batman.

A Bronze Age version of Joe Chill appears in a flashback in the DC Extended Universe film. He is responsible for the deaths of Thomas and Martha Wayne. It's unknown if he acted on his own or was hired to kill them.

In the 2019 psychological thriller, an unidentified man in a clown mask kills Thomas and Martha Wayne during riots orchestrated by Joker, feeling they had it coming for their "injustice" towards Gotham City. It was never confirmed if the man is named Joe Chill.

In the 2022 film The Batman, it is revealed that Thomas and Martha Wayne's killer is still at large twenty-years after their deaths. The film implies that either Salvatore Maroni or Carmine Falcone were responsible for hiring somebody to kill them in order to cover up their criminal activities.

Although the movie keeps this ambiguous and states that it could have just been a nervous mugger who accidentally pulled the trigger. This movie is one of the rare occasions where Chill isn't depicted killing the Waynes' in a Batman adaptation. 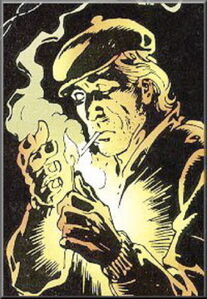 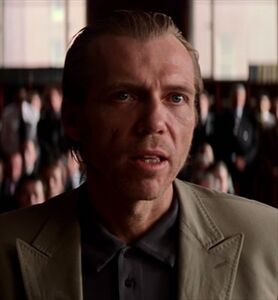 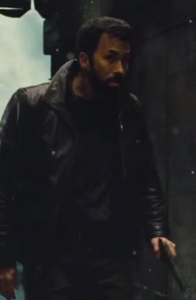 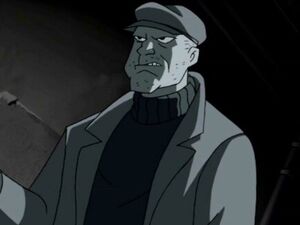 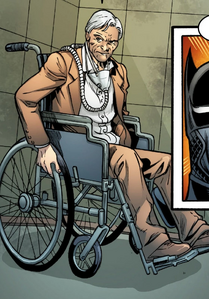