Joe Jensen is a recurring secondary antagonist in Season 7 of Dexter.

He was portrayed by Mike Foy.

In 1998, when Joe Jensen was only 12 years old, a friend named Bobby Hamilton convinced Joe to join him in burning down their school's Gymnasium. However, during the blaze, Bobby accidentally caught fire and died. Joe was caught by the police soon after and was sent to Juvenile Hall for six years, blaming Bobby for his imprisonment. While in Juvie, he regularly fought with other children and set more fires, eventually being released in 2012 at the age of 26.

Joe's first victim, Danny Yamiro, was discovered in his car after being burned alive. An arson investigator named Phil Bosso believed his death to be a suicide by self immolation, though Dexter Morgan soon finds the name "Bobby" written in the soot, suggesting he was instead murdered.

Joe's second victim, Leo Santolongo, is found burned alive in an elevator at a parking garage, the name Bobby once again written in the ashes on the elevator doors.

His third attack is later on at an open restaurant where Joe burned five people alive, including a mother and her six year old daughter in the bathroom. A witness describes Joe saying he was a seven foot tall monster wearing a fire proof suit. Dexter Morgan begins to suspect Bobby might actually be Phil when he rather calmly looks over the body of a child. He investigates Phil, but finds that he's innocent, just a bit strange.

Meanwhile, Joe starts his final attack on a public bus that kills three people. Dexter later sets up a kill room in Joe's basement home and sedates him when he gets home. He almost kills Joe until he begins crying and telling Dexter that he only killed those people due to the trauma of his friend burning alive right in front of him. Feeling pity and having promised his sister Debra that he wouldn't take anymore cases from her, he knocks out Joe and anonymously calls the police. Joe is later arrested and presumably sentenced to life in prison. 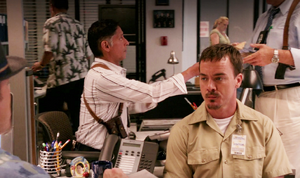 Joe Jensen being interviewed by MMPD. 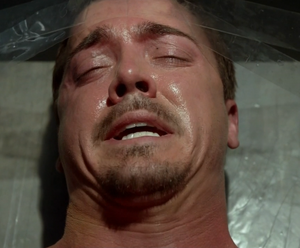 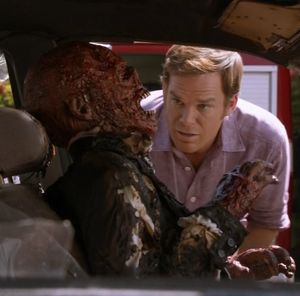 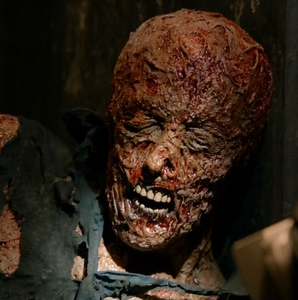 Joe setting a bus on fire, killing three people.
Add a photo to this gallery

Retrieved from "https://villains.fandom.com/wiki/Joe_Jensen?oldid=4152508"
Community content is available under CC-BY-SA unless otherwise noted.