Villains Wiki
Register
Don't have an account?
Sign In
Advertisement
in: Articles under construction, Mature, Terrorists,
and 33 more

Leader of the Seventh Kavalry (secretly)

Killing his city's police force to push forward his agenda,

Kill Dr. Manhattan to gain his powers,
Rewrite reality to fit his racist worldview (both failed).

Senator Joseph "Joe" Keene, Jr. is the secondary antagonist of the HBO adaptation of Watchmen. At first, he's presented as a kindhearted conservative Republican Senator from Oklahoma, running a presidential campaign against incumbent President Robert Redford while seemingly aiding the Tulsa police force's fight against the white supremacist terror group Seventh Kavalry, an offshoot of the larger order Cyclops. However, it's later revealed he is secretly the leader of the terror group who seeks to impose a new white supremacist order across the United States, and has been organizing the group's massacre of police officers as a way to push for laws protecting cops to keep his positive public image. He then seeks to kidnap Dr. Manhattan to steal his powers so that he can execute his plan to rewrite reality in order to fit his racist mindset.

He was portrayed by James Wolk.

When first introduced, Keene is shown to be a reasonable, kind politician with plenty of charisma, which he had learned from his father, retired politician J. David Keene. He showed public support for Tulsa police's war against the Seventh Kalvary, and attempted to bolster morale by spearheading the repeal of his father's Keene Act, allowing officers to wear masks and assume costumed identities. This repeal was taken advantage of by the series' main protagonist, Tulsa detective Angela Abar, who assumed the alias of "Sister Night".

Keene also put up a convincing facade of respect for police by showing up at the funeral of the cop killed in the series' first episode, and almost seemingly surrenders himself to a Kavalry bomber that attempts to blow up the crowd, only being saved by Sister Night in the process. At first, Keene shows respect for Angela

However, his true personality is revealed when Sister Night's close colleague and friend Wade Tillman ("Looking Glass") is captured by Kavalry members and turned over to Keene, who reveals he's been behind almost all of the Kalvary's atrocities, including the massacre of cops as well as the continued assaults against Abar and her family. A cruel sadist, he manipulates Wade, using his troubled youth past, into removing Abar from the force to keep the Kalvary from continuing their attacks on her, allowing Keene's plans to continue unchallenged. In return, he sends the Kalvary to kill Wade in order to prevent him from revealing the truth (though Wade barely escaped the attack).

After capturing Laurie Blake, Keene shows his delusional traits by revealing his desire for god-hood, adding that he would stop at nothing to implement his bigoted worldview. Not even the fact that stealing Dr. Manhattan's powers would result in his death, thus devastating his love and companion Abar, bothered Joe. 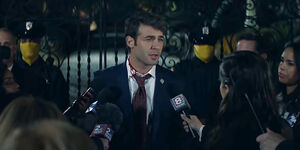 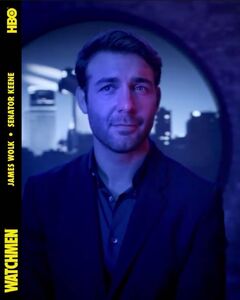