NOTE: This article is about the incarnation of Jericho from the Arrowverse. The mainstream version can be found here: Jericho.

Leader of the Jackals

Succeed with his "reassignment of resources".

Joseph "Joe" Wilson, also going under the alias Kane Wolfman, is a major antagonist in the sixth and seventh seasons of the Arrowverse. He is the Arrowverse's adaption of the DC villain Jericho.

Joe is the son of Slade Wilson and the brother of Grant Wilson. Estranged from his father, Joe has followed in his footsteps by joining up with the Australian Secret Service ASIS. However, he eventually joined a criminal organization of mercenaries known as "The Jackals" and as their leader, encounters both his father and Oliver Queen. Despite Slade's efforts, a happy family reunion does not come to pass and Joe forsakes his family, claiming that he wishes his father to have stayed dead, before escaping.

He was portrayed by Liam Hall in current times and by William Franklyn-Miller in flashbacks.

Thirteen years before joining the jackals, Joe went camping with his father at Milford Sound in New Zealand. While there, Joe sadly told his father that he did not believe that Slade Wilson would stay with him much longer, as he was travelling so often due to his work for ASIS. Slade promised him that he would stay with Joe and they would have a fun weekend, however, he had actually come to eliminate a target.

The same night, the two roasted the fish they caught during the day over a campfire. Joe asked his father whether he was really a pilot and Slade lied and confirmed it. However, Joe called him out on this lie because the father of his friend was an actual pilot and his family were getting free flights, in contrast to the Wilson family. While an Asian family was walking by, Slade told his son that he was working for a cheaper airline that does not offer free flights. Not convinced, a disappointed Joe walked into the woods, claiming that he was not hungry.

The next day, the three played ball at the lake and met the Asian family again. Slade used the opportunity to ask the family father whether he would take a picture of the two, which he did. Slade introduced himself and his son and the family then went off again.

During their time at the camp, Joe eventually started having fun after all. However, this changed when he secretly followed his father, who claimed that he had to go "to the bathroom", only to see him in his whole Deathstroke attire, killing the Asian man - his target. Slade did not realize that Joe saw this incident.

Several years later, after Slade's return from Lian Yu, Joe visited his father in the hospital. He informed the delirious Slade that he had been found on the Philippine coast murmuring the name Oliver. Joe asked who Oliver was and Slade, remembering, replies that he was someone who owed him a debt. Joe claims that everybody though Slade dead but he knew that Slade would come back. Tearful, Slade hugged his son and promised to never leave him again.

A year, Slade was fit enough to train again, even able to defeat his son in combat despite having lost his eye not long ago. After their training, Joe gifted his father a bottle of whiskey for his one year anniversary of coming back from the dead. He also showed Slade a prototype armor ASIS had invented, the same one Slade would later be wearing as Deathstroke. However, whiskey and armor triggered flashbacks to Lian Yu in Slade, causing him to ruthlessly beat his son in training before realizing what he was doing. Annoyed, Joe left the training site.

Another year later, Joe was alerted to an incident at the ASIS facility. Arriving there, he found several corpses. Suddenly, a person stepped out of the shadows and Joe raises his gun but realized that this person was actually his father, who had succumbed to the Mirakuru virus and had slain everybody around him. Slade ordered him to drop his weapon and in his delirious state of mind, he disarmed Joe and aims his sword at Joe's throat. Telling him to stay out of his way, Slade then knocked out Joe and left the country in order to fulfil his promise of vengeance to Oliver Queen.

Joe is captured in Kasnia after an arms deal gone wrong. As he is serving a life sentence, Slade intends to free him. In order to do so, he asks his old friend Oliver Queen for help - needing not his fighting skills but his diplomatic skill. Together, the two of them travel to Kasnia, where Slade plans to bribe the authorities to release Joe. However, the prison warden reveals to Oliver that Joe was killed while trying to break up a fight in the prison yard. When Slade and Oliver return to see the body, the warden reveals that it is no longer in his possession. In truth, the Jackals, the mercenary group Joe investigated, broke into prison and actually kidnapped Joe in order to torture him, as he knows secrets worth millions.

However, when Slade breaks into the Jackal's headquarter to find his son, it is revealed that Joe is actually the leader of the Jackals. After Slade has been outnumbered by the Jackals, Joe arrives and aims his gun at his father's head, claiming that he should have stayed dead. He is ready to kill his father but Slade claims that there is another way - letting him join the Jackals. Joe coldly replies that if he wanted a family reunion, he would have sent an invitation. Slade is not impressed by Joe's gun, claiming that he will kill anybody who tries to stop him from talking with Joe because Joe is the only thing he has left. He then tells Joe to make a decision and Joe lowers his gun. However, he asks how he can trust Slade. Slade replies that trust is built upon honesty, and states that both of them are likely to have a lot of questions. Joe agrees, claiming that they have a lot of catching up to do.

In Joe's private quarters, he offers Slade whiskey. Slade is impressed that Joe managed to even fool ASIS for so long and Joe replies that it is amazing how easy it was to do so. Slade wants to know what kind of operation Joe wants to run in Kasnia, and Joe replies that it is a lucrative reassignment of resources, refusing to reveal anymore. Soon, Joe assembles his men and reveals that several of their equipment is not usable, but luckily the Kasnian military has everything they need. He claims that even their timetable should not be interrupted if the infamous Deathstroke is joining them.

Joe and the Jackals prepare an ambush for the Kasnian military convoy and they mercilessly shoot up the truck. When Slade, forced to participate, shoots one of the soldiers into the leg, Joe tells him that they don't leave witnesses and kills the wounded soldier with his sword. After stealing the explosives the convoy was carrying, the Jackals return to base. There, Joe mentions that Slade failed to kill the soldier and Slade replies that he lost his depth-perception when he lost his eye. Joe, in turn, mentions that most of his men believe that Slade joined him under false pretext. However, he claims that Slade has still his trust, that is why Joe brought him a gift - the captured Oliver Queen. Joe calls this fate and claims that it is time Slade collected the debt Oliver owed him. Feigning glee at seeing Oliver captured, Slade claims that he waited a long time for this meeting and knocks Oliver out.

Oliver is tied up to a chair and while Joe watches, both Slade and Oliver act as if they have not seen again since the island. When Oliver mentions his own son in his attempt to "convince" Slade, Joe mentions that he will make sure Oliver's son suffers too. Slade raises his sword and Joe urges him to kill Oliver but instead, Slade cuts Oliver free. Oliver immediately jumps at the surprised Joe and knocks him out.

After Slade frees Oliver and the two escape, Nylander offers Joe to use the hounds to capture them. However, Joe calls him off as he knows that Slade will try to stop his operation - so that's where they will meet again and this is where he will kill his father. Thus, he intends to continue his plan.

Arriving at their goal, the Jackals set the explosives. Nylander arrives with the detonator and hands it to Joe but Joe replies that he hired Nylander to be the one to use it. His men then vacate the premises in order to be safe from the blast but Joe stays behind, claiming that he wants a good view. Calling him crazy, Nylander then leaves with the rest of the group, just as Slade arrives to talk his son out of his plans. Joe is outraged, citing Slade's statement that trust begins with honesty. He is also shocked that Slade forgave Oliver after what he did to him. Slade reveals that Oliver forgave him for far worse and claims that it is time to bring this anger and resentment to an end. Replying that this is only the beginning, Joe draws his sword and attacks his father.

During the fight, Slade attempts to convince Joe that the insanity he saw in Slade was due to the Mirakuru. However, Joe calls him out as a liar and reveals that he saw Slade kill before the Mirakuru, back when Slade killed the asian spy during their father son trip. He spitefully reveals to Slade that Slade has another son, called Grant, and revelas that as his father's son, he himself made his first kill a few months after their camping trip. This could imply that Joe actually murdered Grant. Joe claims that he slit the throat of his victim, because he wanted to be like his father Deathstroke. Slade replies that he is not Deathstroke anymore and Joe tells him if he is not Deathstroke, he is not his father anymore and just in Joe's way. With this, Joe draws a smoke grenade and uses it to escape.

Despite his hate for Slade, Slade intends to follow his son - both his sons - and find them. Thus, Slade and Oliver part ways while Slade tries to track down Joe Wilson once more. 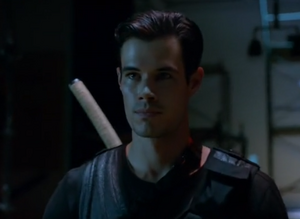