Joey is one of the main antagonists of Oggy and Cockroaches. He is a pink-bodied, purple-headed roach with a pink right eye and yellow left eye. He is the self-proclaimed leader of the trio of roaches which members are his younger brothers Dee Dee and Marky.

Even though he is the smallest roach in the gang, his intelligence is much bigger than his brothers'. He is usually the one who creates new and new strategies and plans to torture Oggy and take control over his house.

He does everything he can to torment Oggy, from stealing Oggy's pants to eating his food. Oggy's feelings to Joey and the other cockroaches are similar, so he doesn't miss an opportunity to beat them with a fly flapper. However, Oggy and Joey (and sometimes also Marky and Dee Dee) are sometimes forced to work together to get rid of the common enemy or solve some big problems.

Without a doubt, Joey is selfish and sadistic. Like Mr. Krabs, he often behaves badly even to his own brothers and beats them, but when they are in trouble, he risks everything to help them.

According to his height, he seems to be very weak, but an opposite is true. If he wants, he can his Oggy or other characters so much they fly over the whole room.

Many of his plans contain money or food. He often dreams about having lots of money and creates many plans to earn them (all failed). Like all cockroaches, he loves food. In many episodes, the trio tries to break into Oggy's fridge, much to his anger. They also once eat his vegetables right from the garden.

Roles in the movie

Oggy and the Cockroaches: The Movie includes four stories from different ages. They are all focused at fight between Oggy and cockroaches. Joey's role and motivation changes in every story. 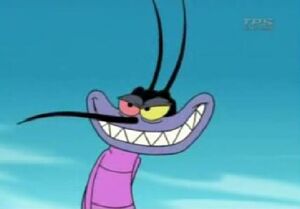 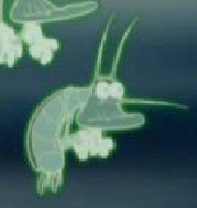 Joey as a ghost 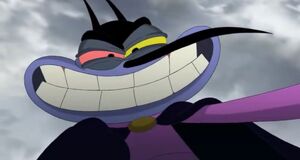 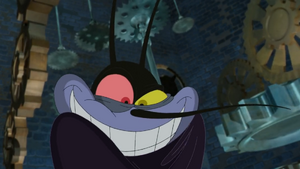 Retrieved from "https://villains.fandom.com/wiki/Joey_(Oggy_and_the_Cockroaches)?oldid=3138132"
Community content is available under CC-BY-SA unless otherwise noted.