Working with his employees.
Throwing peanuts at the faces of employees he doesn't like.

Save his studio from closure (both failed).
Bring his cartoon characters to life (succeeded for a while, but then backfired).

Joseph "Joey" Drew is the overarching antagonist of the Bendy franchise, being his action, most of which are motivated only by his greed, the main cause of most of the most important events happened in the series, making him the main catalyst of the franchise.

He is the former old friend of Henry Stein, the protagonist of the first game in the franchise, Bendy and the Ink Machine, and the former founder of his own studio. He is responsible for the creation of the Ink Machine in his quest to bring cartoons to life starting with Bendy himself, but it went horribly wrong as a result.

He was voiced by David Eddings.

As explained in the book The Illusion of Living, Joey was born in 1901 to a poor family living in Paterson, New Jersey. He spend most of his time with his mother, a homemaker. When five years old, he asked his mother how does their shoe-making father finish making all the shoes, and she responded that shoe-making elves help Mr. Drew. Joey sneaks out his father's workshop to see Mr. Drew making voices for the elves. Mr. Drew explains that when lonely, he imagines elves helping him. The two spend the rest of the night together making shoes and singing alongside the "elves". This moment played a major role in his life, as it made Joey believe that fantasy and belief made people happier. At the age of 10, he witnessed a murder, but wasn't bothered by it.

At the age of 15, he joined the Army during World War I where he was bullied for liking girl stuff such as romance novels and genre fiction. He had two friends named Donaldson and Eckhart which tried to arrange a date for him, but he wasn't interested for unexplained reasons.

In 1917, Joey went to a gala where he was introduced to a hello girl named Lottie, the date arranged by Donaldson. He noticed the initials ZW on Donaldson's boots, and both Joey and Lottie eventually started thinking that the mysterious ZW is a spouse, as they didn't know any soldiers or hello girls with the initials. At one point, Joey realises Lottie has a crush on him, but he makes multiple excuses while writing The Illusion of Living on why he wouldn't date her. When Lottie goes to England, she becomes depressed and Joey tries to cheer her up by lying that the characters they made up are real. Lottie eventually finds herself a boyfriend and stops writing to him. At one point, Donaldson and Eckhart both died, which Joey considered fitting as they joined the Army at the same time. He eventually befriends a man named Kyle, who is the first person to call him Joey, but he secretly hated him as he kept asking about Joey's past.

Through his life, his biggest dream was to become a God. He doesn't view humans as real, but as fictional characters in a show. Somewhere between leaving the Army and starting an animation studio, he owned a bookstore alongside Henry Stein, his best friend.

However, Joey is confirmed to be an unreliable narrator, so how much of this is real is up to interpretation.

In the year 1946, teenager Daniel "Buddy" Lewek collapsed next to Joey's office due to exhaustion, and Joey opens the door. Buddy talks about his business and Joey takes him to the office. After learning that the business is suit delivery, Joey takes an interest in Buddy's drawings and gives him a drawing of Bendy. Joey offers Buddy a job as a gofer, which he accepts. After some bonding with Buddy, he takes Thomas Connor to his office for a important meeting. Joey and Buddy continue to bond throughout the book and introduce other workers to the teenager. When Thomas and Allison Pendle arrive uninvited to the announcement of Bendy Land, he fires Thomas for not meeting his expectations and Allison for siding with her fiance. At the end of the novel, after the attack of Ink Bendy, Buddy is revived into a Boris the Wolf by Joey. Joey tells him to accept it and to not talk or make sense of it. Despite Boris' personality taking over, Buddy does one more act before running away: Crushing Joey's hand by throwing him on the floor.

It was also shown throughout the book that Joey was fine with Sammy Lawrence sacrificing people to the Ink Machine.

The player can achieve a secret tape made by Joey. He sent a message to an old friend, Nathan Arch, stating that the studio is running short on funding (proving he lied when saying the studio is in perfect condition) and requests Nathan to give him a unspecified, but great amount of money.

Joey sends Henry a note to come back to Joey Drew Studios to see something, which would turn out to be the Ink Machine. It doesn't take a while for Henry to see a dead version of Boris the Wolf and question what was Joey doing (although that turned out to be someone else). A cassette left behind by Wally Franks explains that Joey ordered his workers to donate things from their work stations and put them on each pedestal in the break room to help "appease the gods".

It's shown that Joey doesn't care about his employee's feelings about the Ink Machine affecting their work lives.

Another cassette left by Shawn Flynn talks about Joey making mad after some of the Bendy toys had a slightly crooked smile as foul-ups. Multiple other cassettes also criticize Joey, with even Henry leaving one about how Joey doesn't give his fair share of work like they agreed when starting the business and how thanks to his work, he doesn't see Linda often.

He is mentioned by Bertrum Piedmont of how the former is taking full credit of his work, in particular the planned establishment "Bendy Land". In a cassette left by Joey himself, he finally drops the "keep dreaming" act, referring to it as trash.

Joey comments about how Ink Bendy looks terrifying and needs to be locked up, mentioning that he has plenty of souls and can use them to give the creatures souls. He then manipulates Susie Campbell into helping her make Alice Angel real.

Drew makes an actual appearance after Henry defeats Bendy. While in the former's apartment, Henry was told of how he has a perfect family while Joey himself left behind a crooked empire due to his actions and the path he took. Joey further stated that he later expressed regret, and has Henry visit the old workshop, revealing that the entire game is one big cycle made by Joey. In the post credits it is also shown he has a niece/grand niece and has another Ink Machine in his apartment. 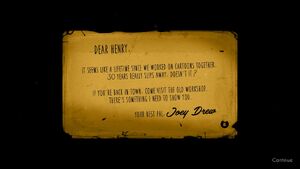 Joey's letter to Henry at the beginning of the game. 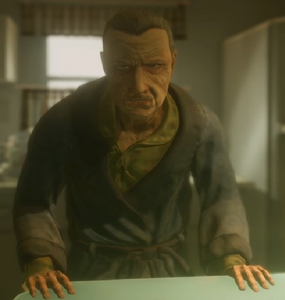 Joey at the end of Chapter 5. 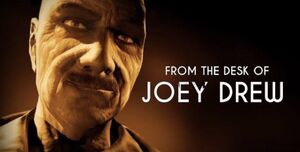 From the Desk of Joey Drew.