Second-in-Command of the 100 Gang

Distributing the Green Light in Freeland.

Joey Toledo is the secondary antagoinist in the 2018 CW series Black Lightning. He is an influential member of the 100 Gang and second-in-command, being the right hand man of gang leader Tobias Whale.

He is portrayed by Eric Mendenhall.

Toledo is a crazy member of the 100 Gang and is the right hand man of the gang leader Tobias Whale. Nine years ago, Whale murdered the father of Jefferson Pierce, prompting him to become the superhero Black Lightning. Toledo was Whale's right hand even back then, and Pierce knows him from that time.

Nine years later, Toledo is still by Whale's side. After one of the 100 gangsters, Lala, has disappointed Whale, Whale sends out Toledo and Syonide, another henchwoman in order to capture him. The two stop Lala's car at a crossroads and force him to come with them at gunpoint. They then deliver Lala to Whale and Toledo watches in glee as Whale harpoons Lala through the shoulder. A few days later, after is has been revealed that Black Lightning has returned from the dead, Toledo accompanies Tobias to visit the coroner who confirmed Black Lightning's death to Whale. After Whale has roughed up the man, he orders Toledo to beat the coroner to death.

After Black Lightning has started to investigate the Green Light drug that has started to flood the streets of Freeland, he finds out that chemicals used to create the drug are stored in a warehouse in the city. He interrogates the owner and although the man is hesitating to give up anything, he eventually reveals that he is paid by Joey Toledo, who is responsible for the 100s Green Light operation.

Meeting with his friend Peter Gambi, Pierce demands to know how Gambi could not have known that Joey Toledo was back, knowing that he worked for the man who killed Pierce's father. Pierce also deduces that if Toledo is around, Tobias must be as well which Pierce deems impossible, believing to have killed Whale himself. After obtaining a location for Toledo from Police Inspector Henderson.

Pierce sets out to take care of his old enemy. He follows Toledo's girlfriend to his location, steals her phone and sends a message to Toledo, posing as the girlfriend and claiming that Toledo's henchmen won't let her in. Toledo writes back that he will be out in a second and indeed heads out, only to be confronted by Black Lightning. Black Lightning brutally beats him up and demands to know where Tobias is but Toledo only laughs. When Toledo tries to draw a gun, Black Lightning disarms him and repeats his question but due to the toll his new powers takes on his body, Black Lightning is suddenly struck with a strong headache. Sensing the opportunity, Toledo gets back up, knocks down Black Lightning but realizes that he still cannot beat Black Lightning.

Slowly getting back on his feet, Toledo tells Black Lightning that the next time Tobias sees him, Tobias will kill him and Toledo will bury him. As Toledo slowly stumbles off, Pierce tries to blast him with electricity but is unable to do so. Witnessing this, Toledo laughs insanely as he escapes successfully. Joey returns to Whale's hideout where he informs Whale about his battle with Black Lightning. He also reveals that something was wrong with Black Lightning and that somehow, it seemed that his head was hurt.

However, instead of being grateful for the information, Tobias grabs Joey by the neck and asks why Toledo did not finish the job. Toledo claims that Black Lightning destroyed his gun and he was all alone, so he fled instead and contacted their man inside the police department. Whale then tells him to make sure that a crew is placed near lockup in case Black Lightning actually gets captured. Together with Syonide, Joey later drives Whale to an appointment with his doctor.

Soon after, Tobias hones his fighting skills in battle against a professional fighter Toledo procured. He ruthlessly beats him down and knocks him out and then arrogantly asks Toledo where he found this "clown", considering him an unworthy opponent. Toledo promises Whale that the man was one of the best fighters available but Whale tasks him with finding an opponent worthy of his time. When the fighter gets back up, Joey wants to shoot him but Whale tells him to lower his gun, happy that one of the fighters is finally showing some spine. He engages the man once more, this time smashing his head in and killing him. After killing the man, Whale tells Joey to check the man's bag because he believes him to be high on some drug. When Toledo does so, they find some of the drug "Green Light" - a drug sold by Lady Eve.

While in his hideout, an illegal fighting club, Toledo suddenly hears gunshots. Unconcerned, he sends out his henchmen to check out the noise but gets surprised when they do not return. After more gunshots are heard, Toledo grabs his own gun, but suddenly one of his guards is hurled into his office, together with a flashbang grenade. While blinded by the grenade, Joey manages to fire a few shots but then his magazine is empty and a masked Peter Gambi - who learned of Toledo's hideout from Lady Eve, enters the office and aims his gun at him. Confused, Gambi asks who Gambi is but Gambi doesn't reply, he only shoots Toledo in the chest twice. As Joey slumps to the ground dying, Gambi puts a small box on Toledo's chest, a box he got from Eve as a message for Whale. Somehow understanding what has occured, Toledo smiles one last insane smile before he dies.

After Whale learns of Toledo's death, he vows revenge on Lady Eve. Around the same time, Black Lightning is informed about Toledo's death by Detective Henderson. 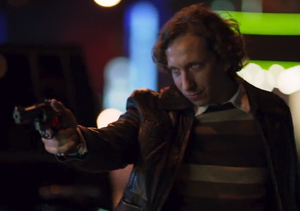 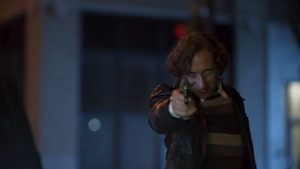 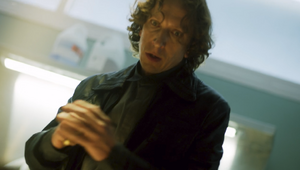 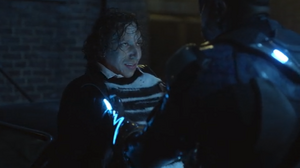 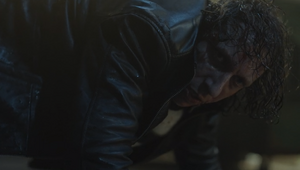 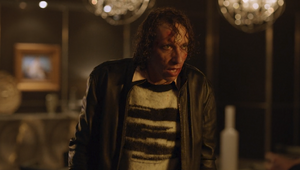 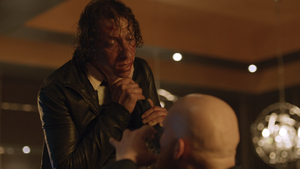 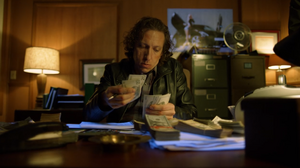 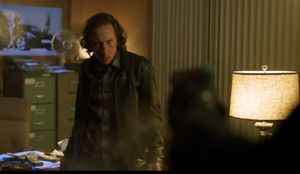