Eliminate Kamen Rider Zi-O and any other challengers to the Quartzer.

Jogen is an elite Quartzer with the power to transform into Kamen Rider Zamonas and one of the two secondary antagonists of the movie Kamen Rider Zi-O: Over Quartzer.

He is portrayed by Syuusuke Saito, who is known for portraying the heroic Ian Yorkland in Zyuden Sentai Kyoryuger.

Jogen and the other Quartzers conspired to remake the Heisei era of Kamen Rider with themselves as the Kamen Riders. To accomplish this, they used Sougo Tokiwa/Kamen Rider Zi-O to unify the worlds of the Heisei Riders into a singular timeline for them to destroy and recreate anew.

In order to get Sougo to meet Krim Steinbelt and obtain the last of the Ridewatches, the Drive Ridewatch, Jogen and Kagen were sent into the Sengoku Era to target Krim's ancestor, Clara Steinbelt, to get Sougo to travel back in time. Before Sougo and co. could travel back in time, Jogen ambushed them outside of Krim Steinbelt's mansion but was fought off by Kamen Rider Zi-O, Geiz and Woz. Later, when Sougo and co. traveled to the Sengoku Era to protect Clara and maintain the flow of history, Jogen and Kagen allied themselves with the Takeda armies, with Kagen leading them into battle against the Oda armies commanded by Geiz in Nobunaga's place.

However, Sougo is freed by Tsukuyomi and Gou, and goes to assist Geiz in confronting the Quartzers. Kagen and Jogen assume their Rider forms to deal with Geiz and Sougo. Zamonas and the Dai Mazines attacked Zi-O while Zonjis and Barlckxs fought Geiz and the recently defected Woz. Zamonas and Zonjis later fought the 19 Heisei Riders summoned by Sougo and were defeated when the 20 Heisei Riders all performed their Rider Kicks on them. 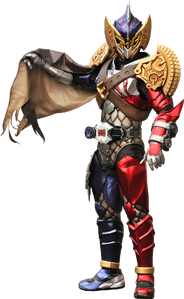 Kamen Rider Zamonas
Add a photo to this gallery

Retrieved from "https://villains.fandom.com/wiki/Jogen?oldid=3922901"
Community content is available under CC-BY-SA unless otherwise noted.