Taking delight in murder and corruption.

Manipulating People.
Shattering the ego of innocent people until they lose their will to live.
Toying with Kenzo Tenma and Anna Liebert/Nina Fortner.

Kill the caretakers in Kinderheim 511 (succeeded)

Commit the "perfect suicide" (i.e to leave no trace of his existence)
Cause the collapse of human society and be the last man standing (formerly)
Ruin the lives of Kenzo Tenma and Anna Liebert
Drive Anna to insanity (all failed)

Johan Liebert is the titular "monster" and the main antagonist in the manga and anime series Monster and the unseen secondary antagonist in the light novel sequel Another Monster. He is a ruthless and psychopathic serial killer whose life was saved by Kenzo Tenma as a child. He is also the twin brother of Nina Fortner. Johan has stated that his one true goal is to be the last one alive when the world ends—but upon rediscovering a children's book that appeared to play a pivotal role in his homicidal nature, he instead set his mind on committing the "perfect suicide", i.e. dying without leaving behind any evidence of his existence (with the possible exception of Dr. Tenma's memories of him, in order to destroy Tenma's faith in humanity).

He was voiced by Nozomu Sasaki in the Japanese version of the anime who has also voiced Mello, and Keith Silverstein in the English dubbed version, the latter of whom also voiced Hisoka Morow, Chairman Rose, Dr. Wily, Deag Grav, Hawk Moth, Masayoshi Shido, Deep Sea King, and Aaroniero Arruruerie.

Before the events of Monster, Johan Liebert's origin is shrouded in mystery. When he was just a young boy, he was wandering the border of Germany with his twin sister, Anna. They were both discovered half-starved and dying. They were taken to two separate orphanages, Anna to Orphanage 47, and Johan to Kinderheim 511. Kinderheim 511 was a horrid place where children were treated like criminals and experimented on in an attempt by the government to create perfect soldiers.

One day, Johan led a revolt in the institution, and got fifty people to kill each other by simply "tossing an oil rag into a fire." Johan's mentors had always nurtured Johan's skill for manipulating others with no conscience. However, when confronted, they claimed that Johan was already a "monster" when he first came to the orphanage. The details of how his mind came to be so twisted are still unknown.

this section is under construction

After the events being free from Kinderheim 511, Johan and Anna were adopted by Michael Liebert and his wife, which Johan would later kill them and putting Anna in shock, however he was saved by Kenzo.

Johan does not appear in Another Monster due to the lack of his comeuppance, However after the three years after the events of Monster. Johan had later inspired person named Hermann Führ to kill. It is told that the countries like United States, United Kingdom, Japan, China, etc. Are now aware of his existence, his crimes and actions are now exposed to the public and was possibly became wanted by the FBI. However, he is still believed to be in a coma, while some think that Johan took his own life and successfully commits suicide after finally learning his true identity and past. however it was revealed canonically that Johan had "rebuilt" his life. However he is mostly faking it to lay low and planning something big.

It's apparently unknown what really happened to Johan after the events of Another Monster, it's mostly believed that Johan is either still at large or was caught, or possibly found his true identity and past and successfully commits suicide. By this day Johan's fate still remains a mystery.

Wantonly cruel and ever-manipulative beneath an unfailing polite facade, Johan is a certifiable psychopath who has no conscience whatsoever and revels in human suffering; he was once described by his own sister Anna as being "absolute evil", and Schuwald claimed to see Hell itself in his eyes. Johan's persuasiveness and charisma, coupled with his seemingly generous and empathetic exterior, allow him to manipulate people into doing his bidding very easily and efficiently. He is very patient, tactical, and methodical, retaining an unnerving calm even when committing (or being confronted about) his atrocities; his monotonous manner of speaking and unchanging expression make him appear completely emotionless, although he is shown to feel on rare occasions. Overall, he is a ruthless, remorseless, and uncaring chessmaster who is always five steps ahead, having such a penchant for corruption and ruining lives that he treats it as a mundanity, being fully aware of what he is without even trying to justify his actions.

The only two people that he seemed to refuse to kill are Anna and the doctor that saved his life, Dr. Kenzo Tenma, but it is likely that this was merely to toy with them. It is often believed that he genuinely cares for Anna, yet seeing as he had no qualms with (and expressed no remorse for) traumatizing her time and time again to further his own goals, it's quite transparent that his idea of "love" is either twisted, or—as with many of his other actions—feigned. As an example of his deceptive nature, he once hinted at having multiple personalities—a criminal one that is the dominant personality, and a distressed one wishing to prevent the crimes, the latter never physically seen—which is quickly dismissed as merely an attempt to mislead Tenma, Anna, and/or the authorities.

Inheriting his mother's genius intellect and deductive reasoning capabilities, Johan is prodigiously brilliant and impressive in whatever he studies and the absolute best in anything he pursues. This is noted by Schuwald when praising Johan's knowledge of law and economics, and by Karl, who notes that none could surpass Johan in anything. Johan has an amazing voice (hypnotic), he always intuitively knows the right thing to say at the right time, he is an excellent speaker and teacher.

He has the most perfect, ideal, healthiest, and prime physical conditions, he possesses incredible pheromones, he is "well-endowed", handsome and attractive.

Johan can intuitively and perfectly assess anyone's psychology, behavior, and motivations, he sees their mind and soul at first glance allowing him to perfectly predict what people will do and how to manipulate them, he has perfect, observational, perceptive, analytical, calculating, tactical, and deductive skills, these allow him to perfectly predict, understand, and control anything no matter how simple or complex, easily. These skills, along with his charisma, eloquence, and persuasive abilities, allow him to create convoluted plans and control anyone into doing what he wants easily.

He can amass wealth and power without being noticed or challenged, he nearly and easily conquered Europe's entire economy only to stop because his goal changed. Johan can create loyal, submissive, and completely obedient "friends," allies, and followers out of anyone and anything after one conversation, one word, and people will do what he says, absolute obedience.

He can make anyone and anything feel good and hopeful, or feel overwhelming intimidation, fear, and despair with his presence. He possesses endless willpower, vitality, he never gets bored. He is able to not feel fear, guilt, regret, loneliness or pain. He's capable of leading humanity on a global scale with ease.

Johan is an exceptional master manipulator. The process of his exploitation could be represented by a tree where he is the base and each branch in a separate case which is all tied together in one grand scheme.

Johan leaves such a strong impression on people that he is able to convince legions to commit murder, play suicide games, or do other monstrous things after just a single encounter. According to Heinrich Lunge, this process is done by altering the fulcrum of someone's identity, like removing a map's coordinate axis. The more jumbled their "lines" become without that foundation, the more room he has to redraw or redefine their maps.

As discussed in the personality section above, Johan often manipulates people to kill for him; this is done in a variety of different ways. When working with Michael Müller and Detective Messener, for example, he blackmailed the two by threatening to reveal their drug scandal if they refused to murder Mr. and Mrs. Fortner. In other cases, such as with Peter Jürgens and Rheinhard Dinger, he befriends his victims and acknowledges their worth; they are therefore willing to perform "favors" as extreme as killing, dedicatedly withholding any information on him even in the face of authorities.

Johan is also skilled at making people reflect on their mistakes or any haunting memories of the past, as in the cases of Richard Braun and Miloš. He forced Richard to connect his former blunders as an officer and alcohol problems with his desire to see his daughter, making him believe he was not worthy of the one thing he truly wanted. Similarly, he convinced Miloš that he was not wanted by anyone and thus destroyed the boy's cheerful personality (at least temporarily).

When dealing with Schuwald, Johan gained the tycoon's trust pretty quickly. Schuwald noticed Johan's talent in law and business and decided to employ him as his personal secretary. To further secure their relationship, he approached Schuwald's son Karl and reunited the family, putting himself on even more favorable ground to succeed Schuwald's position.

Tenma once visited the blind man who taught Johan French and English. The old man was impressed by Johan's intelligence, patience, and mastery of the languages, as he had quickly become perfectly fluent (mastered) in both within a span of just thirteen months. Johan learned and mastered Latin in a very short time while attending the University of Munich. He tutored Karl to help him impress his father.

Johan is also a master of perfect disguise. Around the middle of the series, he masqueraded as his sister while living in Prague. This proved to be quite useful, not only for spying but also because he was able to pass unnoticed while leaving crime scenes. However, Tenma wasn't fooled. Grimmer was also skeptical of Johan's disguise. Johan, for the most part, played his role as "Anna" perfectly, leaving the impression of a beautiful, charming and polite young woman. It was easier for him to manipulate people while in form, especially the male characters like Detective Suk. 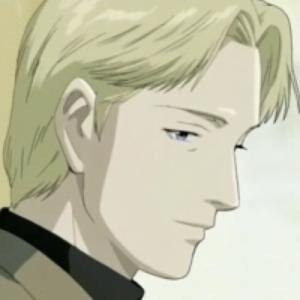 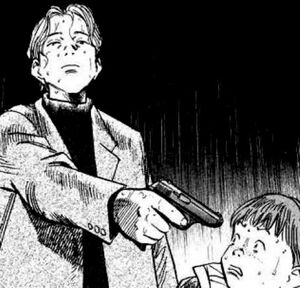 Johan pointing a gun at a child. 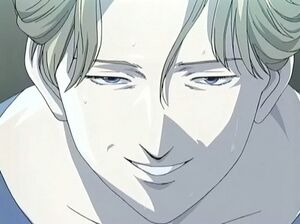 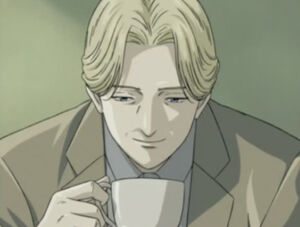 Johan's sadistic smirk when facing the child he had turned insane. 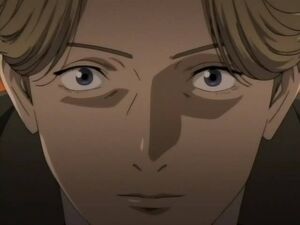 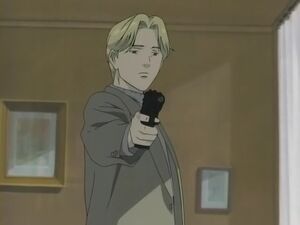 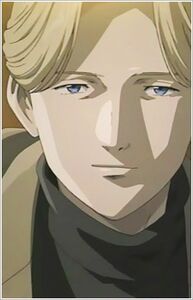 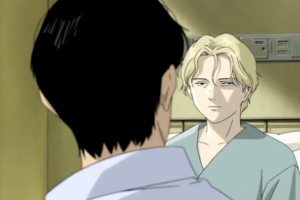 Johan awaking at the hospital after being shot. 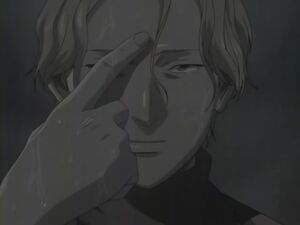 Johan attempting to commit the "perfect suicide" by making Tenma shoot him. 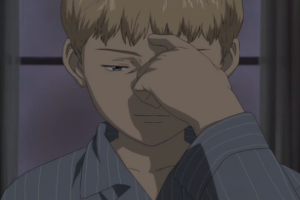 Young Johan instructing his sister Anna to shoot him in the head. 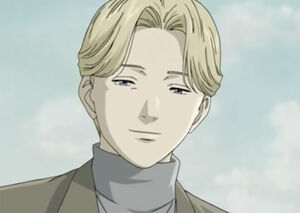 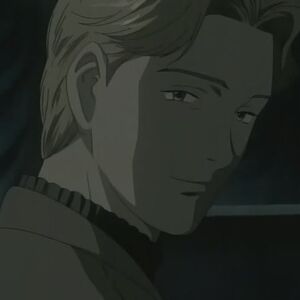 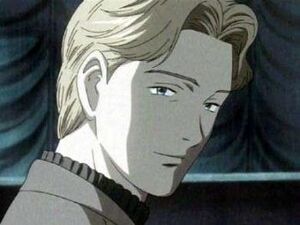 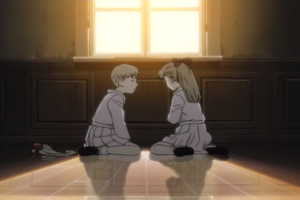 Johan Liebert- The Life of the Monster

Monster- Ending Explained
Add a photo to this gallery

Retrieved from "https://villains.fandom.com/wiki/Johan_Liebert?oldid=4272233"
Community content is available under CC-BY-SA unless otherwise noted.