John Blund is the main antagonist of the 2017 Swedish short fan film Blund's Lullaby, which won the "My Annabelle Creation" Contest and was made a part of the official The Conjuring Universe canon. He is an enigmatic entity and inspired by the Nordic version of the Sandman.

Two girls are playing outside when their mother calls them in to go to bed. They brush their teeth, then one stays downstairs to read while the other goes upstairs. While going up the stairs, the girl finds a pull-string music box that plays a short lullaby. She begins to continue up the stairs when an umbrella in a holder behind her suddenly opens and flies out. The girl ignores it, but hears footsteps behind her and looks back down. The umbrella is missing, and the footsteps continue. The girl runs up the stairs only for the footsteps to get faster, and a burst of air hits her when she reaches the top.

The girl runs into her bedroom, turns out the light, and ducks under her covers. As she lays there trembling, the door slowly creaks open, and she hears what sounds like a man humming the lullaby from the music box. The girls feels the covers begin to be pulled off of her, and sits up to find the room filled with black umbrellas surrounding her bed. As she stares at them, a pair of naked, humanoid legs partially hidden behind the umbrellas step closer to her bed. The screen goes black, and a girl's voice is heard saying "goodnight".

The girl's fate is unknown. 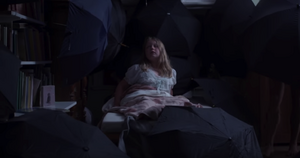 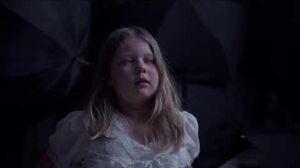 Blund's Lullaby
Add a photo to this gallery

Retrieved from "https://villains.fandom.com/wiki/John_Blund?oldid=3373824"
Community content is available under CC-BY-SA unless otherwise noted.