Charisma
Manipulation
Mastery of combat
Intelligence and strategy
Weapon use

Seeing himself as a better leader than Charlie ever was.

Become a greater leader than Charlie Townsend at all costs.

Use The Angels in order to hack and use Project: Calisto with Elina as his pawn.
Kill Rebekah and her supporters (all failed).
Kill the other superiors of the agency (succeeded).

Jonathan "John" Bosley is the main antagonist of the 2019 American live-action film Charlie's Angels and former ally to the Angels. He is the treacherous and lustful commander of The Townsend Agency who plots to use The Angels in order to achieve full control over Project: Callisto, so that he could become more powerful than his deceased superior Charlie Townsend ever was.

He was portrayed by Patrick Stewart, who also played Rafe Bentley in Masterminds, Pharaoh Seti I in The Prince of Egypt, Dr. Jonas in Conspiracy Theory, Avery Bullock in American Dad!, Darcy Banker in Green Room and King Goobot in Jimmy Neutron.

John Bosley was originally one of Charlie's most trusted assistants. However, Charlie knew that he was not a reliable person and that he could take over the agency at any time. Thereafter, John spent the rest of his life being a field commander of The Angels, rather than succeeding Charlie as the head of the entire agency. He then orchestrates a plan to use frame his co-worker Rebekah, whom he despised all along, and turn The Angels against her so he could use them as a tool to hack the yet to be built Project: Calisto and he would eventually become an even more powerful leader for the agency than Charlie ever was. He pretends to be on The Angel's good side and commands them through an attack on the enemy forces, seemingly led by Rebekah, just in order to gain trust and receive information about the design of Project: Calisto. However, one of John's co-workers Edgar insists that Project: Calisto is too dangerous for use as it can cause fatal seizers on the enemies and cause potential damage even on the innocent people around the area. John however decides to use it anyway, and eventually, Elena manages to build hack-able Calisto devices. John is proud of her inventions.

However, Rebekah is acknowledged of John's evil master plan and she steals Elena's equipment. The Angels then go to track and destroy Rebekah. However, John secretly hires an assassin called Hodak in order to kill his superiors. Hodak manages to kill Edgar and Peter Fleming, but he fails to kill Rebekah. Later, The Angels (aside from Elena) discover the truth about John's plans; he was plotting to hack the devices of Project: Calisto and use them for mass destruction so he could take over the agency and lead it instead of Rebekah and so that he could become the one leader to be more powerful than his late superior Charlie, and he could therefore prove the world how powerful and reliable he is. He later forces Elena into creating another device so he could use it to torture Langston and kill him. She questions him up until he reveals his true motives and threatens to kill her if she doesn't obey him.

He later invites Alexander Brock and Hodak to a ball gala, and he presents Project: Calisto to Brock as he manages to convince Brock to use it illegally for him. However, Elena eventually calls for help and The Angels manage to rescue both Elena and Langston. Brock is then ordered by Bosley to use the device on The Angels. However, the other agents of the Townsend Agency then ambush John's goons and Sabina fights John. John almost chokes her to death, but Sabina manages to knock him out. After John recovers, he and Brock are arrested for conspiracy and presumably taken into custody. 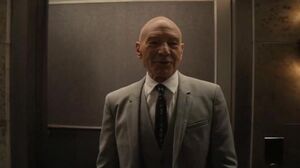