Professional Hit-Man for the Older Guy

Kill Holland March and his daughter

John Boy is the secondary antagonist of the 2016 comedic action crime mystery-thriller film The Nice Guys. He is a professional hit-man who's working for The Older Guy and was sent by him to eliminate Holland March, his daughter, Jackson and Amelia.

He was portrayed by Matt Bomer.

While hunting down Amelia, Blue-Face is run over by a car and mortally wounded. He tells Jackson Healy, who was hunting him, that John Boy will be coming for them and that he will kill Healy, his partner Holland March and March's daughter Holly.

After Healy and March have found Amelia and brought her to March's house, they call Amelia's mother Judith Cuttler, a high-ranking official in the United States Department of Justice. Judith immediately sends John Boy to kill her daughter. Judith's assistant calls March and tells him that a doctor will arrive at the house soo.

Arriving at the house, John Boy introduces himself to Holly. He claims to be the doctor and is invited inside. After realising that Holly and her friend Jessica are the only ones home, he tries to enter the room where Amelia is sleeping. Eventually, Holly realises that John Boy is an assassin and aims her father's gun at him. John Boy calmly adresses Jessica, telling her that he will spare her if she helped him to kill Holly. Holly however tells Jessica to call the police and Jessica runs towards the telephone. John Boy catches her and throws her out of the window before fleeing from the scene himself. On the street, he meets Healy and March who ask him whether he heard the suspicious sound from the house. Falsely assuming that his cover is blown, John Boy opens the trunk of his car, grabs the rifle inside and opens fire. A gunfight ensues and after hearing police sirens John Boy jumps into his car and flees. He is visibly unhappy that he failed to kill his target.

Unbeknowns to everyone, Amelia has fled from the house when she heard the gunfights. As she has not seen John Boy's face, she hails his car and begs for help. John Boy is absolutely stunned when seeing her. He shoots her in the chest and then drives on, successfully escaping.

John Boy is at a party with his right-hand man Older Guy where they plan on stealing Misty Mountains film, killing the projectionist and then killing both March and Healy. John Boy approaches the projectionist, claiming that there has been a mess with the film. Both leave the room together. He then interrogates the projectionist, beats him up severely and drops him into a dumpster. However, before his men can get to the projector the movie is projected onto the stage of the room. Everyone present is able to see the movie John Boy was supposed to destroy. To create a distraction, John Boy blows a showcase car up with a grenade and then opens fire at March. During the gunfight, in which Healy comes to March's aid, John Boy is also attacked by security men. After beating down and killing two of the attackers he turns around to see March fleeing with the film roll. He pursues him and attempts to shoot him but is attacked by Healy in turn. During the fight, Healy draws the pin out of one of John Boy's grenade but John Boy manages to get rid of the jacket the grenade is in in time. Healy then proceeds to strangle John Boy and only stops when Holly threatens to never speak with him again should he kill John Boy. Healy then reminds John Boy that he owes his life to a thirteen year old girl before knocking him out. He is then arrested by the police. 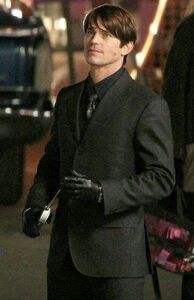 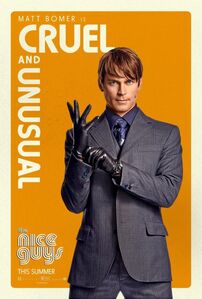 John Boy poster.
Add a photo to this gallery
Retrieved from "https://villains.fandom.com/wiki/John_Boy?oldid=3526927"
Community content is available under CC-BY-SA unless otherwise noted.