The Doctor of Thugonamics
John Sena

Attacking them with steel chains.

Cena started his heel run in October, which was shortly after his debut in June. Cena and Billy Kidman teamed together in a tag team tournament to crown the first WWE Tag Team Champions of the WWE SmackDown! brand, but lost in the first round to the team of Kurt Angle and Chris Benoit. The next week, Cena blamed Kidman for the loss and attacked him, turning heel for the first (and only) time in WWE.

On the next episode of WWE SmackDown!, Cena dressed up as Vanilla Ice and performed a freestyle rap, which had hinted at a new gimmick for the up and coming star. The next week, Cena received a new gimmick, a rapper who'd cut vulgar promos on his opponents, officially beginning his first heel gimmick.

For the first half of 2003, Cena went after the WWE Championship, which incited a rivalry with Brock Lesnar. During the feud, he created a new 'finisher', the "FU", which mocked the "F-5" that Lesnar used. He had a match with Lesnar for the belt at Backlash 2003 but lost after being hit with an F-5. At the end of the year, he became a face again after A-Train turned on him and revealed that he was the sixth man in the now-heel Lesnar's 2003 Survivor Series team, with Cena joining Kurt Angle's team in response to his betrayal.

Cena has remained a face since then. Outside of the ring, he has been accused of bad behavior by Chavo Guerrero Jr. and Tyler Reks & Ryback & Michael Tarver. He lost the title to a returning Brock Lesnar at SummerSlam 2014.

In 2019, he finally turns heel and insult, Elias, after interrupted him, and then attack him as his alter alter-ego Dr. Thugonamics, proved that he's back in his villainous role once more. 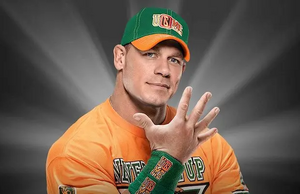 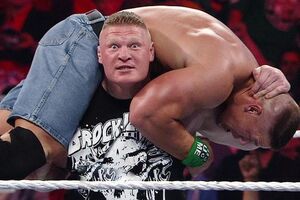 Lesnar about to destroy John Cena. 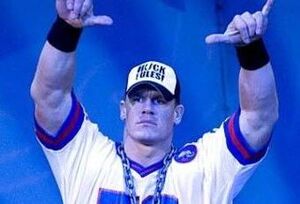 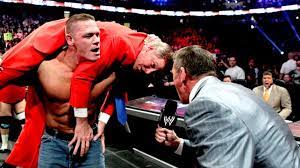 John Cena destroying John Laurinaitis before the latter gets fired by Vince McMahon.