Leader of the Deathstroke Gang

Get revenge on Connor Hawke for taking away his life (ongoing).

John Diggle, Jr. is the son of John Diggle and Lyla Michaels, the nephew of Andrew Diggle, and the estranged adopted brother of Connor Hawke in the Post-Flashpoint timeline. In an erased future in 2040, he became Deathstroke and the leader of the Deathstroke Gang.

John Diggles in a photo 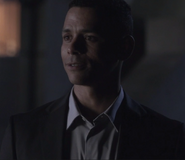 "This city will be ours."